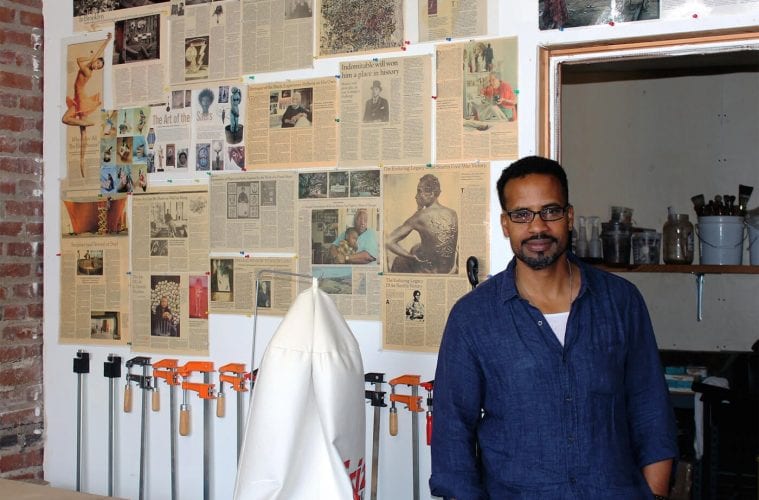 A studio conversation with Masud Olufani

Article and images by Anna Nelson-Daniel.

Braided rope stretches across the floor. Found objects protrude from the walls of Masud Olufani’s studio at Atlanta Contemporary. The measured placement of each thing within the space is consistent with that of his previous exhibitions throughout Atlanta. Olufani sits beside a drafting table to discuss his ongoing projects.

ArtsATL: Atlanta has been home to you for some time now, having studied at both Morehouse and SCAD Atlanta.

Masud Olufani: I have lived in New Orleans, Dallas [Texas], Atlanta, Miami, New Jersey, Queens, Los Angeles. I was raised primarily in the Northeast and some in the South.

I’ve sunk some roots in this city now. I do feel linked to the South in a certain sense as well. There’s a quality of the spirit here that I really like, which comes out of slavery, of Jim Crow, of the Black church — singing in the Black church in all of these emotive ways of expressing yourself in your praise tradition that is prevalent here that I respond to. Work in progress in Olufani’s studio, May 2017.

ArtsATL: Atlanta has a historical narrative that has informed pieces like Blocked (2016), alluding to the history of Five Points Marta Station in proximity to the Thomas Frazer and Company slave auction house. In what ways has the city established a context for meaning in your work?

Olufani: Blocked (2016) showed footage of people walking back and forth in front of Five Points Marta Station. The piece alluded to a haunting. As everybody was looking at artwork [in the exhibition] around the space, singer Shala Whitehead entered barefoot in a simple white dress and mounted an auction block in front of video projections and started singing a Negro spiritual, “Before I Be A Slave I’ll Be Buried in My Grave. Oh Freedom.”

There’s a sense of history [in Georgia]. Atlanta, however, not so much. Atlanta was paved over and actually hasn’t done a good job of leveraging its historical narrative. I think the city has run away from it because it’s embarrassed by slavery. I look to cities like Savannah as having done a more successful job of that. Savannah can’t really run away from it. The imprint is very prevalent.

When Atlanta burned down, they just said, “Well, we’re just going to pave over all of it and forget that” . . . but you can’t really. It’s there. It’s in the Marta station, in the Margaret Mitchell house, in different locations around the city. Atlanta has an opportunity to really embrace its history. I think what they may find is that there are benefits on a number of levels. It will [can] be a touchstone of healing for the community to confront the history that took place at Five Points Marta station as a former slave market site. There’s an embracing of all that Atlanta has been — the good, the bad, the ugly. All of it.

ArtsATL: In exhibitions like Poetics of the Disembodied, your work incorporates the ready-made. What is the significance of found objects to reference life or making the familiar uncanny (unfamiliar)?

Olufani: I had always been fascinated by sardine cans, but I hadn’t made the psychological association to the whole notion of tight packing (a way of packing slave ships very tightly). And then, of course, there’s the whole prison industrial complex and warehousing of black and brown people disproportionately in those systems. The numbers [pictured below] are prison ID numbers.

The can just seemed like a perfect vehicle to collapse time and link the past and the present. It’s clearly a ready-made; it’s used to reference in a certain sense exactly what the can is used for — all of these fish packed tightly in this can — but then it also obviously alludes to a sociological situation that exists in the past and also exists in the present. Close-up of cans from Tightpackers installation, May 2017.

ArtsATL: Your work intentionally frames a historical narrative in a contemporary context. Would you consider this line of work politically active?

Olufani: It may be. There are certainly references to political and sociological issues in the work — in particular the piece I did about the prison industrial construct Tight Packers, which is a very clear statement about that experience. The other piece, Grounded, which clearly references the disenfranchisement of African Americans vis a vis slavery.

What I’m interested in is a transcendence to reveal the soul or the spirit of the thing I’m talking about. So that there’s this notion that yeah this is a very bad situation, but there’s something aspirational about the way the context is constructed — so you don’t just get caught up in the overwhelming complexity and difficulty of the moment. That there’s a sense of hope, in a way. That’s what I aspire to do, even when I’m talking about the political or other. It’s a notion that there is something greater that comes out of a willingness to suffer for a principle or belief.

ArtsATL: Performance seems to be an increasingly integral part of your practice. Will you likely do more of this going forward?

Olufani: You know, I’m also an actor. So I think for a long time I saw the two experiences as very separate. I was content with that because there is a notion in our society that you have to specialize — do this one thing and not do two; and if you are doing two things you’re obviously doing that one thing as a hobby, you’re not serious about it.

For a long time friends had been saying, “You perform, Masud, as an actor. Why don’t you incorporate that into what you do?” And it wasn’t until I did the piece at Five Points Marta Station that I incorporated performance in my [artistic] work. Studio selection from Visionaries installation, May 2017.

SCAD hired me to do a film commemorating the Civil Rights Movement in Savannah. What is now the Jen Public Library used to be Levy’s Department Store in Downtown Savannah, which is where the first sit-in movement took place. Three people were arrested during this sit-in, so they were putting a plaque up and dedicating a space to honor these people who were arrested.

We [also] did a live performance at SCAD and set these three [portraits] up on the wall. I actually fired slingshots at them. We had the segregation sink, a spigot and a water fountain, with a white and colored-only sign. I fired at all three of these [portraits] while Shala Whiteread was singing in the foreground, then I turned to the camera and read from the Declaration of Independence.

That was really my first iteration actually doing a performance as part of my work — actually participating in the performance. Going forward I certainly see an opportunity for that. I am such a tactile maker. It’s going to be interesting to see. I’m working on a project now that is going to incorporate me performing in it.

ArtsATL: Do you create these pieces with the audience in mind, to share a direct takeaway message?

Olufani: The audience is always a resident spectator who is always present. I find it a bit disingenuous when artists say they’re not thinking about anybody else when they’re making their work. You’re making decisions and conscious choices based on how a third party is going to read the work. The motivation to make the work comes out of a commitment and need to get this out. Having developed this skill set, I feel a certain responsibility to the craft. Then, I don’t want to say anything that isn’t going to shed light on some important facet of the human condition. I’m really interested in meaning and metaphor.

ArtsATL: Which artists would you say most influence your work/desire to be an artist?

Olufani: In the visual work, I love Leonardo Drew — huge fan. I mean it goes across the board. I like Radcliffe; I’ve liked his work for years. I’m a huge fan of El Anatsui. I love Theaster Gates; I mean I like his work, but I like his concept and his practice, the way he integrates his personal practice with community building. I love Ursula Von Rydingsvard. The physicality of her work is so moving. Martin Puryear is one of my influences in a visual world, his craftsmanship in the poetic element, I guess, the work he does.

Masud Olufani juried Gathered III at MOCA GA, exhibiting through July 1. His work can be seen in collaboration with T. Lang, founder and artistic director of  T. Lang Dance for Atlanta audiences in October 2017. Olufani can also be seen in his recurring role as Derrick Fletcher, husband of lead Dr. Eva Fletcher, in BET’s The Quad.