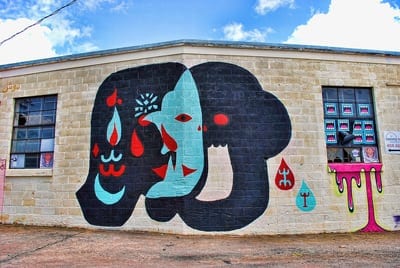 Street art and public space the subject of “Living Walls: The City Speaks,” coming in August

Have a spare wall that could use some art? Monica Campana would like to talk to you. She and Blacki Li Rudi Migliozzi are the duo behind “Living Walls: The City Speaks,” a colloquium and exhibitions using street art to address urbanism and public space, and vice versa.

Their ambitious project has attracted artists from three continents, who will join locals to participate in the August 13 conference and two exhibits at Eyedrum gallery. One is a large display of wheat-paste posters; the other is gallery-type artworks.

In a departure from the norm for graffiti art, the organizers are seeking permission from property owners to use their walls for the outdoor event. That’s where the volunteer wall-owners come in. You can send inquiries to livingwallsconference@gmail.com.

Jordan Siler and Jeff Ferrell will deliver keynote addresses at the August 13 colloquium, to be held at Georgia Tech. Siler, who runs the Public Ad Campaign, has engaged in guerrilla actions to call attention to the pervasive practice of mounting commercial ads illegally, and with impunity. Ferrell, a sociology professor at Texas Christian University, wrote “Crimes of Style: Urban Graffiti and the Politics of Criminality.”

Migliozzi says he plans to use this bully pulpit to push for a municipal tax on advertisements in public spaces to fund public art, as promoted by the “Beautiful City” movement.

Campana and Migliozzi are still in fund-raising mode. Mint Gallery is hosting a silent auction, organized with Dashboard co-op, this Saturday, June 26. Dodekapus Art Collective is helping put on a carnival on July 2. For details on both, see the Living Walls Facebook page. You can make donations through Kickstarter.