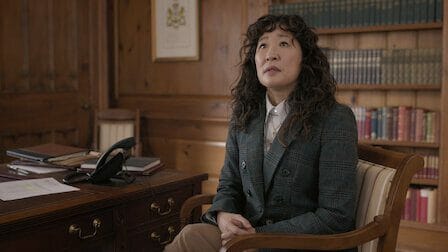 At the end of the enjoyable/infuriating first episode of The Chair, I let out a little gasp when I saw the closing credit: directed by Daniel Gray Longino. I was a long-suffering colleague of Dan’s father, Bob, when we both toiled under the employ of an Atlanta newspaper.  So I was happily surprised. (Both of Bob’s sons are carving out strong careers as directors and editors in the film and TV industry.) Personal connection aside, The Chair is terrific.

The lead is Sandra Oh, one of my favorite female actors, along with Olivia Colman. If you haven’t seen her struggling to get home as the world is ending in the 23-year-old film Last Night, you should rent it immediately. More recently, she’s been kicking ass in Killing Eve. (For the record I never watched a single Grey’s Anatomy, where she was a cast member for 220 episodes, but I suspect that the medical soap did not deserve her.)

In The Chair, Oh plays Ji-Yoon Kim, the, yes, newly named chair of the English department at a snowy, fictional college named Pembroke. Her colleagues are mainly white and ancient (Holland Taylor and Bob Balaban are game standouts in that cohort). An unintentional Nazi salute in a classroom from Ji-Yoon’s sorta-kinda almost boyfriend Bill (Jay Duplass) kicks off the millennial-student maelstrom central to the series, as she simultaneously tries to deal with budget cuts and cancel culture. Oh, and a very game David Duchovny shows up (as himself) for one episode, parodying his own pretensions.

Grieving for his recently deceased wife, Bill is such a screwup from episode one that it’s hard to invest in any hint of romance with Ji-Yoon; she’s too good for him. But that’s a small drawback. Their uneven dynamic and the rocky departmental politics resolve in a final couple of episodes that are sweetly melancholy. If you have an academic background, this show is for you. If you are living in America with panic over Critical Race Theory, this is for you. If you’re smart and have a honed sense of humor, this is for you. And hey, each episode is half an hour, and there are only six of them, right?

Amazon Prime | The Pursuit of Love

Equally long as The Chair but feeling longer, The Pursuit of Love (adapted by actor-director Emily Mortimer from Nancy Mitford‘s 1945 novel) works hard to make us care about a pair of first cousins before, during and after the Blitz in London. That Mortimer succeeds halfway is a partial success, but a lot of the three-hour limited series is a gorgeous, candy-box slog.

Spinning off her own history as one of six wealthy sisters, who traveled down very different paths (do a Wiki search on pro-Nazi sis Unity, for starters), in Pursuit, author Mitford presents the narrative anchor, Fanny (Emily Beecham), as a sober-minded young woman who details the reckless, tomorrow-we-may-die extravagances of her cousin Linda — Lily James, delightful, but sometimes directed by Mortimer to cartoonish excess. (Dominic West as her racist, blustering dad is also cartoonish, but extremely enjoyable; so is Andrew “Hot Priest” Scott as a decadent neighbor who is a surprisingly steadying influence on Linda’s life.)

Mad for men – or at least the storybook idea of Romance that their Y-chromosomes represent – Linda burns through one alliance after another. First it’s with a blond-haired ponce (Freddie Fox); then a hot Communist (James Frecheville), who wants to fight for Spain; finally for super-wealthy Frenchman  (Asaad Bouab), who gives Linda exactly enough shopping money to prove how superficial we’ve assumed her to be.

The ballast to her helium, Fanny watches her cousin’s adventures with a mix of disapproval and envy, which makes actor Beecham vacillate between prim scold and pushover for Linda’s larks. She does as well as she can with a difficult part. The series’ first episode in particular is pushy, with intertitles introducing characters, and a tempo that recalls Tony Richardson’s 1963 romp, Tom Jones. It’s all presented on a very surface level. When you hope the series might deepen, it doesn’t. I understand this is a limitation of the novel as well, but also an attribute of it; apparently Mitford approached her characters with a lifted eyebrow and a cool heart.

I wasn’t crazy about Pursuit, but I watched the whole thing. If you’re in need of Genteel British Heritage Programming, this fits the bill.

There has already been a sea of ink spilled about creator Mike White’s The White Lotus, a sometimes scathing dissection of a group of one-percenters vacationing at the Hawaiian resort of the title. The plot is significantly driven by the toxic-masculine grudge match between entitled honeymooner Shane (Jake Lacy) and the resort manager and recovering addict Armond (Murray Bartlett), a clash that leads to a corpse being carted off the island. The strong cast includes Connie Britton, Steve Zahn and a never-better Jennifer Coolidge, giving us a character who’s a fascinating mix of pampered idiot, pitiful overgrown child and insatiably needy monster.

HBO | In the Same Breath

While the previous limited series covered here are worth binging, the 90-minute documentary In the Same Breath is, well, breath-stopping in ways their long forms can’t approach. Director Nanfu Wang, with the clandestine help of three other filmmakers shooting footage in the hospitals and on the streets of Wuhan, documents the early months of the Covid pandemic in the city where it started. Was it caused by a natural animal-to-human transmission, or possibly leaked by a Wuhan laboratory? (Though Donald Trump’s claim that it was a man-made calamity was, like most claims he made, treated with derision, by the end of Breath, you may be reconsidering that notion.)

What’s startling to see in the film is how the basic freedoms of speech and movement, which we take for granted in the U.S., are so thoroughly squelched by the Chinese government. What’s also startling, and depressing, on the flipside, is to see how our American “freedom,” as Covid is endlessly politicized, is the freedom to be idiotic about spreading and exposing ourselves to a disease that’s now preventable.

Something that isn’t preventable or “fixable,” though people persist in believing so, is sexual orientation. The documentary Pray Away shows us one of the largest attempts to inflict “reparative” or “conversion therapy” on young LGBTQ people, starting in the 1970s. That’s the movement known as Exodus, formed by gay and lesbian people who firmly, faithfully believed they could pray their own longings away. They were wrong. The builders of this group, who ultimately left and renounced it, are the prime talking heads in Kristine Stolakis’s sadly compelling film. We see one of them, Julie Rodgers, marrying her girlfriend, Amanda. At the ceremony, we also clearly see the scars of the burns she inflicted on her upper arm, when the rigorous life of denial led her to self-harm.

Though Exodus was dissolved in 2013, after decades of physical and emotional damage, Pray Away also focuses on an earnest, young male missionary who’s currently building a following among other queer people, determined to change their ways. The only thing possible to say is, bless their hearts… And, hopefully, we’ll see you on the other side of your self-deception.

I loved French director Leos Carax’s super-weird 2012 film Holy Motors, and even programmed it for a film group I belong to; some audience members still haven’t forgiven me. But it’s a great, freaky movie.

Carax won the directing prize at this year’s Cannes Film Festival for his latest, Annette, starring Oscar winner Marion Cotillard and Oscar nominee Adam Driver as mismatched lovers who give birth to a singing puppet who can fly. No, seriously. It’s a musical featuring sing-songy tunes by the Sparks Brothers, who penned approximately 10 lines of lyrics, which the actors sing over and over and over again.

The movie is an insult to watch — and shame on the many critics who gave it a pass. Spare yourself.

By comparison, the ridiculous Cooking with Paris seems eminently sensible, even though it’s complete and intentional nonsense. Now 40 (yeah, doesn’t that make you feel old?), Paris Hilton is the focus of this, um, “cooking” series. Swanning around in enormous pink gowns with enormous pink bows, Hilton throws edible glitter at molten marshmallows and, with BFF Kim Kardashian, whips up some French toast you wouldn’t accept from a well-meaning toddler on your birthday.

Speaking of toddlers, if you removed “cute,” “so cute” and “so pretty” from Paris and Kim’s vocabularies, they would be about as articulate as an average three-year-old. But if you’re looking for a mindless hate-watch, this show might be just what you’re seeking. Especially when Hilton says things like, “Cereal is my favorite food group,” or “What’s a tong?”