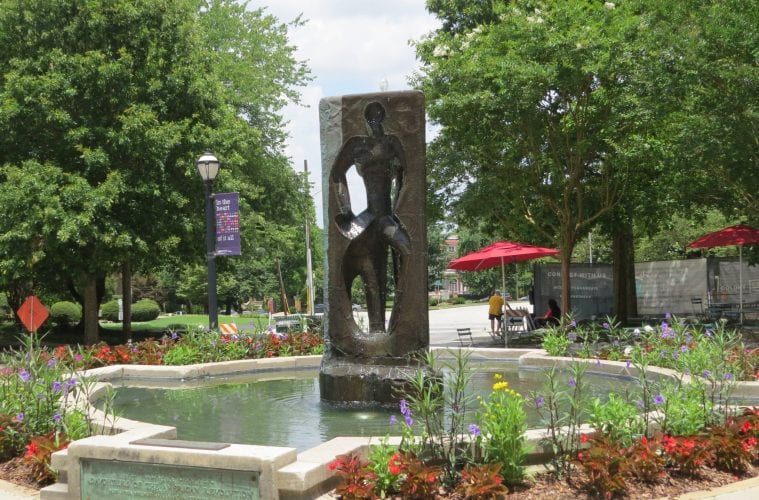 Not far from the Woodruff Arts Center, where Peachtree Street intersects with 15th Street, stands a large, striking bronze sculpture in the middle of a fountain, a prism-shaped edifice in which the artist’s use of negative space plays a vital role in its portrayal of human form. Its name is Trilon, and it is the work of Steffen Thomas (1906–1990), a German-American artist who settled in Midtown Atlanta and is best known for his public art. 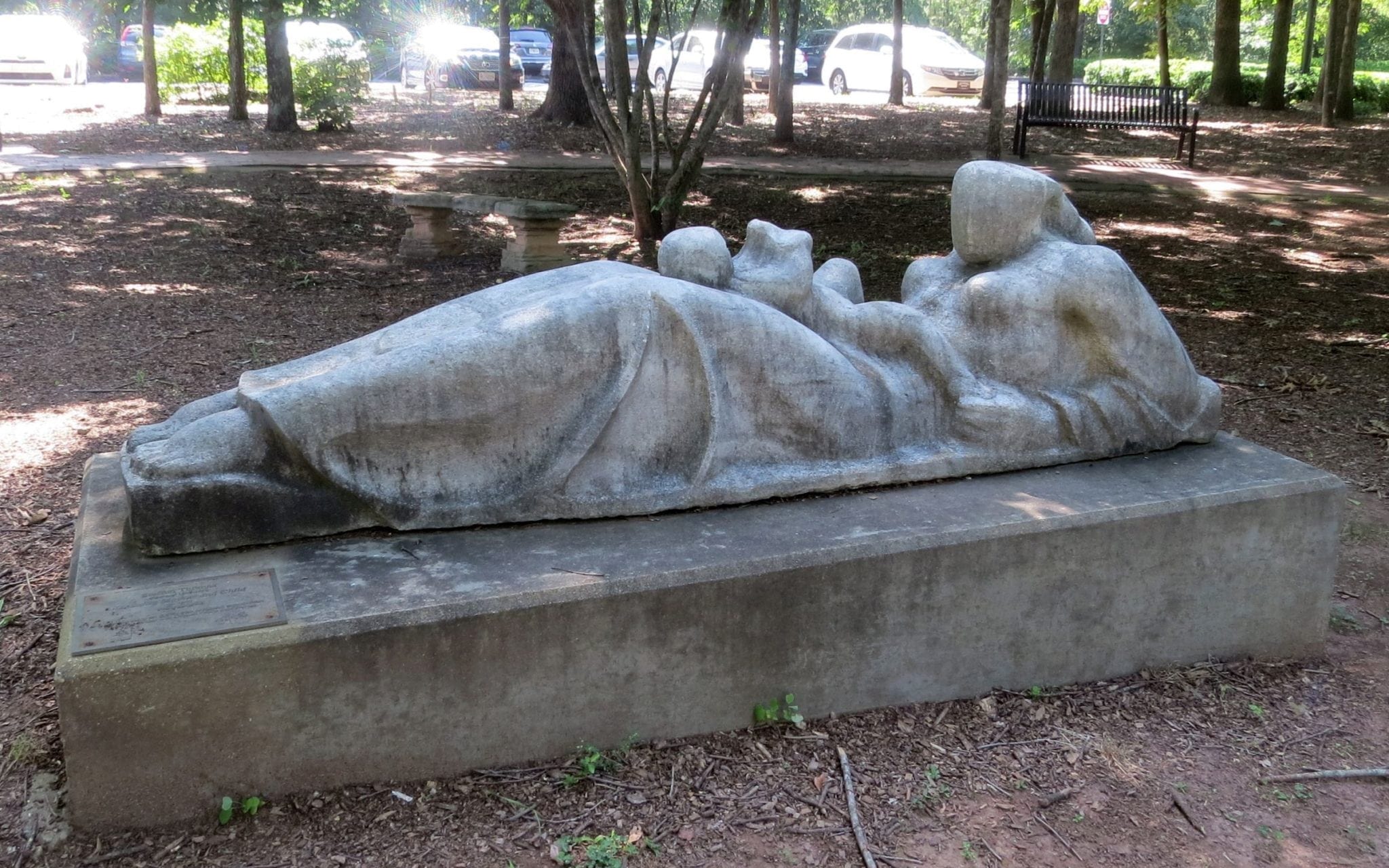 Many examples of public works by Thomas can be found all around Metro Atlanta. Reclining Mother and Child, a low-profile, eight-foot-long sculpture of Georgia marble, resides in a pleasant wooded space amid benches and brick pathways outside the Roswell Public Library. Throughout the early part of his career, Thomas was commissioned to sculpt prominent people of the South: Chief Justice Richard Russell, Jr., Martha Berry, Joel Chandler Harris, Franklin D. Roosevelt for the Little White House, in Warm Springs, and George Washington Carver for the Tuskegee Institute. More infamous is his colossal bronze statue of former governor Eugene Talmadge, which can be found downtown on the southwest corner of the Georgia State Capitol. Several of his depictions of prominent Georgians are inside the Capitol’s museum: Moina Belle Michael, who conceived the idea of poppies as symbolizing remembrance of WWI veterans; scientist Charles Holmes Herty, Sr., who revolutionized the turpentine industry; and Georgia Governors Michael Hoke Smith and John Marshall “Jack” Slaton.

Born in Germany in 1906, Steffen Wolfgang George Thomas showed artistic interest and inclination early in life and was apprenticed to a stonecutter at the age of 14. At 17 he was accepted to the School of Applied Arts in Nuremberg and entered the Academy of Fine Arts in Munich two years later.

In 1928, at the age of 22, Thomas made his way to America, settling in Atlanta in 1930, where he soon began to receive numerous commissions to sculpt busts of prominent people. In 1933, after a brief courtship, he married Sara Douglass, a neighbor and a school teacher, and he became an American citizen in 1935. 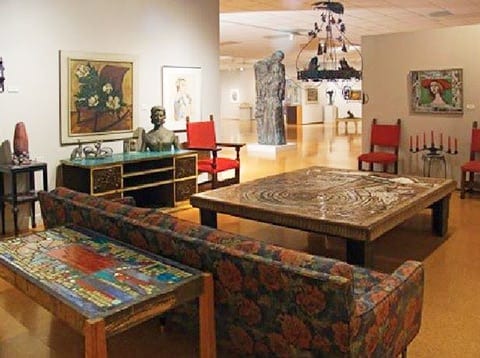 The Steffen Thomas Museum near Madison, Georgia, is dedicated to showing the artist’s work. (Used with STMA permission. Copyright STAR LP of GA)

The many public sculptural works Thomas made throughout his long career can be seen at various locations around Atlanta, Georgia, and the Southeast, but the single largest collection of his work is at the Steffen Thomas Museum of Art, 67 miles from Atlanta’s Midtown, a little over an hour drive via I-20, about seven miles southeast of Madison in Morgan County.

After Thomas’ death in 1990, his wife pursued a dream to establish a museum dedicated to her husband’s life and work. Having found that too many obstacles prohibited building a museum on the site of their Midtown home and studio in Atlanta, their son, Steffen, Jr., suggested she build it on farmland he owned in rural Buckhead, Georgia, near the city of Madison. With the help of family, friends and collectors, her dream was finally realized, and the Steffen Thomas Museum of Art opened in 1997. It is a pleasant day trip from Atlanta that only takes an extra half hour if you go by surface roads. In either case, once you are on Bethany Road, don’t blink, because you could easily drive past the museum’s modest building surrounded by rolling pasture. It is  one of only a few fine art museums in the nation dedicated to the life and work of a single artist. 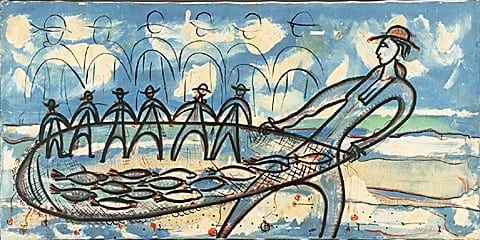 The museum’s contents reveal a surprising diversity of artistic media and stylistic elements versus what the early public sculptures alone might imply: from painting and encaustic to drawing and engraving to works made of found materials. Many of the works appear in the frames he created for them. While the commissioned public works of the early part of his career emphasize his fundamental training in classical forms, the museum’s collection reveals the expressionist leanings of his personal artistic voice. The collection especially discloses how, despite the range of styles and materials employed throughout his life, Thomas’ lifetime of works are unified by his artistic themes, philosophy and humanity.

This is exemplified in a new exhibition at the museum, Steffen Thomas: Casting the Net of Brotherhood, which runs through September 1. Three of Thomas’ most recurrent themes drive the choice of sculptures and the works on paper: brotherhood, family of man and motherhood. Thomas believed in universal commonalities that bind all people and cultures, despite differences in religion, sex, ethnicity or citizenship. Women figure extensively in his art, within which a theme of motherhood is pervasive.

“During the time that Steffen traversed this earth he witnessed many events that drove expressionism in his art,” writes curator Alice Lee Andreottola. “War, tyranny, the defeat of tyranny, racism at the highest level, the civil rights movement, and women’s liberation. His ideas of how these events shaped our people and communities are as relevant today as they were when he lived.” 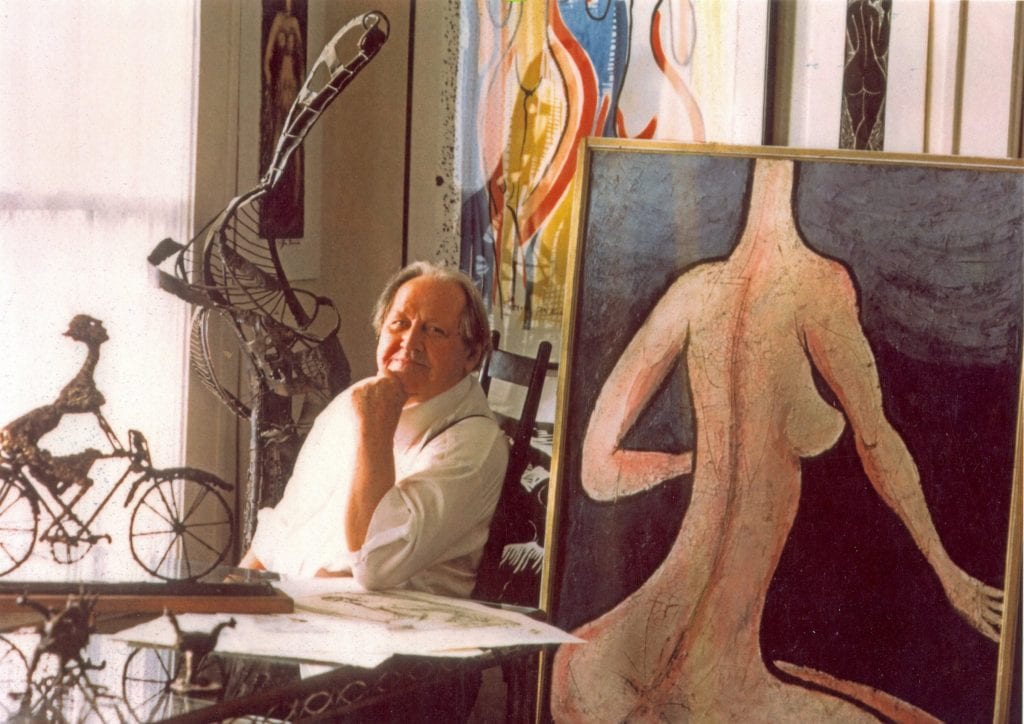 In this exhibition, visitors see the evolution of how Thomas sought to develop the theme of brotherhood throughout his career, culminating in his magnum opus, Monument to the Brotherhood of Man. The piece was lost when his home was sold to developers in the 1970s, but studies on paper were preserved and feature prominently. The monument featured the motto, “This World is Too Small for Less than Brotherhood — Too Dangerous for Less than Truth” — also emblazoned on his self-designed funeral urn.

Were it only a matter of Thomas’ public art, his impact on Atlanta’s art history would still be significant, but the diverse treasures found at the Steffen Thomas Museum of Art reveal a depth and breadth to his work and person that complete the picture of this important Atlanta artist.

Steffen Thomas: Casting the Net of Brotherhood runs through September 1 at the Steffen Thomas Museum of Art. The museum is open to the public for viewing Tuesday through Saturday from 11 a.m. to 4 p.m.