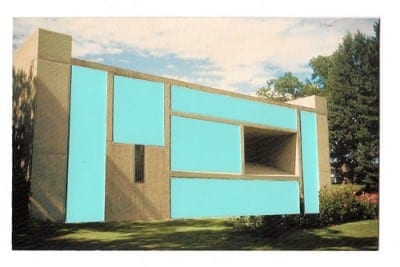 There’s nothing like up-close and personal contact with objects of all kinds and the artists themselves to hone an understanding of how art is made and how artists think. In Ingram’s case, working with Ellsworth Kelly to install the latter’s show at the High in 1999 was nothing short of an epiphany.

Kelly’s process of abstracting and condensing perceptions into colors and shapes is at the core of Ingram’s practice. Unlike his mentor, however, Ingram’s work hovers and maneuvers between abstraction and figuration. You might have to read the label to learn that a de Stijl-like composition of horizontal and vertical rectangles represents the windows of a Dutch apartment building, but the iconic parabola of the St. Louis arch (or if you are as much a fan of modernist design as he is, the silhouette of a Warren Platner table) is unmistakable in another drawing.

Ingram also makes what you might call interventions. He emphasizes geometry or architectural elements by painting over parts of a photograph of a classic modern home, or he cuts out the windows and replaces them with vellum. The works in the show are more personal than you might think. Architecture is in Ingram’s blood. “Pei” refers to the addition to the Des Moines Art Center designed by the eponymous architect, whose work there was preceded by the original Eliel Saarinen structure and followed by a Richard Meier addition. The four views of 410 Winterset recall the modernist home in his neighborhood whose glamour excited his imagination as a child.

If seeing in shape and color is one of the through lines of Ingram’s practice, so are the precision and clarity of the execution. The interjection of a few squiggly lines (flower boxes) in the large triptych “Quai St. Michel, Paris (Matisse)” underscores the subliminal power of his perfectly crafted squares, rectangles and parallelograms.

Matisse is clearly on Ingram’s mind. Just as he drew over images of Kelly’s work to better understand him, he has begun “redrawing” the work of the French master. It’s doubtful that Ingram will throw away his ruler, but these looser works suggest a possible new direction.