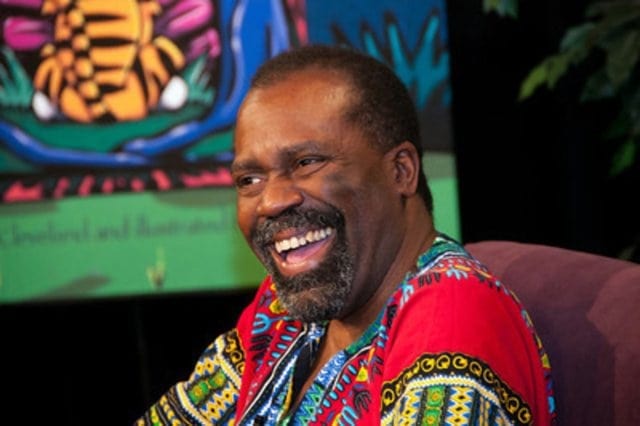 Actor Rob Cleveland, "is one of the funniest people in Atlanta, or anywhere, says one of his theater community admirers, Freddie Ashley of Actor's Express.

Little escapes the notice of Rob Cleveland. He can glance around a room and usually alight on a prompt of some sort.

The observational humor that results is like a “TED Talk about nonsense,” he says of his glib riffs. “I don’t tell jokes in the traditional format of setup, punchline, call-back. They’re more like situational stories, like just talking about stuff. I look at stuff in my life and find that jumping-off point and just go freewheeling.”

For example, Cleveland spied a sign in a parking garage elevator. “It was in Braille,” he says. “My brain started thinking, ‘Why is there a need for that in a parking garage?’ So I wrote a bit. Then I noticed that the elevator only had the capacity for 1,500 pounds. I started mentally doing addition of people’s weight. And so on.”

Cleveland was to have brought his Seinfeldian sensibility to the Aurora Theatre for what it is billing as its New Year’s Eve Comedy Spectacular. But the Lawrenceville troupe announced Tuesday that Cleveland had caught a “breakthrough” case of Covid-19 (meaning a completely vaccinated person becoming infected with the virus) and was being replaced by Big Kenney.

Once Cleveland fully recovers, he is open for whatever opportunities come in 2022, as long as it requires footlights. At 66, he is, among other things, a stalwart of Atlanta’s theater scene. “When I first played Hoke in Driving Miss Daisy, I needed makeup to look older. Now I’m old enough that I no longer need the makeup.”

With a burning need to engage and entertain, Cleveland is also a film and stage actor, storyteller, author and workshop leader. In other words, an unabashed, hyper-verbal ham.

“Everyone knows Rob is one of the funniest people in Atlanta, or anywhere, but I marvel at his versatility,” says Freddie Ashley, artistic director at Actor’s Express, who directed Cleveland in the company’s season opening production, Red Speedo. “He is a meticulous and serious-minded actor, though his sense of humor is never far away. He has a way of inhabiting characters that may have significant flaws, but who have added layers of humanity through his performance.”

No one in Cleveland’s early life saw this career path coming. Growing up in Atlanta, he was once the quiet, bookish kid who skipped a grade. “I was a nerd,” he says. “My father had wanted to be a doctor but faced limited opportunities because he was African American, so I wanted to honor him by becoming a doctor or dentist.”

At Emory University, Cleveland majored in biology. When he was a sophomore, he saw a flier seeking auditions for Death of a Salesman. He got a bit part. “And afterward, my GPA dropped because I was spending all of my time doing theater. It was an extracurricular club then, not a major.”

Cleveland went to dental school for one semester, which he describes as a “dark night of the soul.” However, the stage beckoned, so he dropped out and began pursuing auditions. He has appeared in T-Bone and Weasel, I’m Not Rappaport and The Boys Next Door, among others. At one point, he returned to the Emory stage, with his wife, actor Mary Lynn Owen. They appeared in Athol Fugard’s Statements after an Arrest under the Immorality Act. Fugard himself was in the audience. “It was really special, doing a play for probably the world’s greatest living playwright,” Cleveland says.

His film credits reveal some yin-and-yang juxtapositions that make him laugh. “I was in Tyler Perry’s House of Payne and Meet the Browns,” he says. “I was also in the first season of the Dukes of Hazzard. My kids said, ‘But it had a car called the General Lee and the horn played Dixie. Didn’t that seem wrong?’ I said, ‘In 1978, no, it didn’t seem wrong, but it should have. Some things don’t age well.”

Cleveland taught special ed for a while, but, in 1980, joined the comedy show Tush, named for host Bill Tush and produced by Ted Turner. Some of its alumni went on to Saturday Night Live. Cleveland began paying his comedy dues at the Punchline, going from open mic to headliner. He has shared a stage with John Mendoza, Tim Allen and Brett Butler.

Through all of these projects, Cleveland never lost his sense of a narrative always in progress. “I believe all art forms are storytelling. Theater is storytelling through acting. Ballet is storytelling through dance,” he says. A church asked him to punch up some parables, and that experience led to writing seven Story Cove books for children, using folktales from around the world. For 12 years he was Storyteller-in-Residence at Fernbank Science Center.

The polymath makes all of his work look easy, colleagues say.

“Rehearsing with Rob rarely feels like work,” Ashley says. “Even though in the midst of intense scene work, he is serious and focused, you know that before the day is over, he is going to be regaling you with a story that will have you on the floor laughing. He’s packed four or five lifetimes worth of stories and experiences into his time on earth up to now. He’ll casually mention something in passing, and you have to stop and say, ‘Wait! Wait! Wait! You have to tell us the story behind that!’”

Candice Dyer’s work has appeared in Atlanta magazine, Garden and Gun, Georgia Trend and other publications. She is the author of Street Singers, Soul Shakers, Rebels with a Cause: Music from Macon.