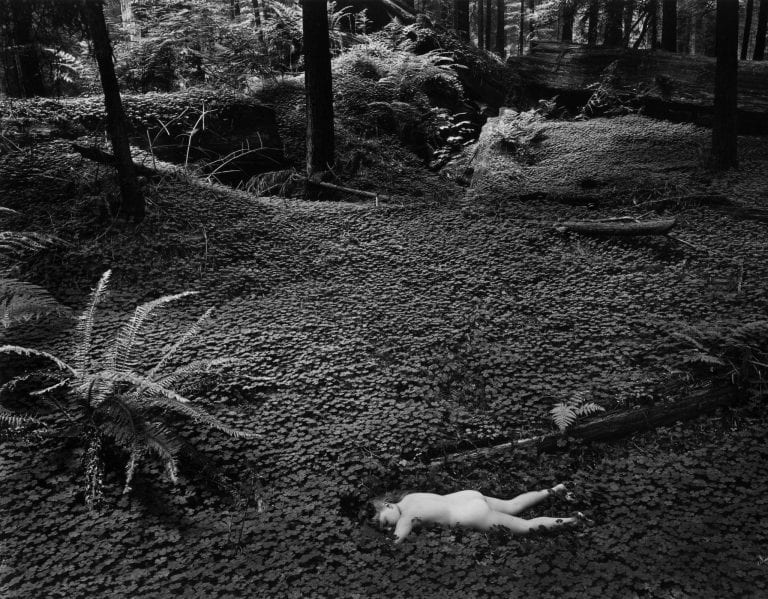 When I became interested in photography in the 70s, the late Wynn Bullock was a luminary. He, along with Ansel Adams and Edward Weston, were what I thought of as the “California Big Three” – well-known photographers who worked extensively in large format, who had an interest in nature photography, particularly the landscape of the West Coast, and who had a strong streak of romanticism.

But then Bullock seemed to drop off the map. While Weston and Adams continued to be shown and studied, Bullock was not even part of the conversation by the time I was a photography graduate student in the mid-80s. (By the way, we too-clever-by-half photography students thought Weston was cool but Adams was corny. We were probably unduly influenced by our knowledge of Weston’s – um – busy love life.)

Bullock’s semi-obscurity has persisted. The last major respective of his work was almost 40 years ago. Wynn Bullock: Revelations, at the High Museum through January 18, 2015, a comprehensive overview of his work, seeks to correct the situation.

Perhaps one of the reasons that Bullock slipped from prominence is that his work is damn hard to categorize. He went back and forth between abstract darkroom experiments to lush landscapes. Furthermore, he did not evolve over time from one genre to the other.  He apparently would make beautiful black and white pictures of nudes in redwood forests one day, and make color abstractions using a home-built contraption with lights and filters the next. Bullock has no easy-to-explain progression, and no simple, snappy hook on which to hang a critical assessment. I suspect that this, as much as anything, caused curators and critics to shy away from him. The High is to be commended for tackling his work in all its complexity.

It is difficult to describe or discuss Bullock’s work without breaking it down into categories.  At the risk of oversimplifying, one might divide it into three broad groups. In the first group is the black-and-white “romantic” work. These are carefully composed, conventionally beautiful architectural studies, nature studies, and nudes – or, as in many of his photographs, nudes in architectural or natural settings.  It is this work that’s most obviously similar to Weston and Adams.

In the next group are manipulated photographs, which includes everything from solarized prints to the aforementioned abstract color studies. Their common denominator is some sort of conspicuous darkroom or camera special effect.

The third group comprises close-ups of various objects. While they are “straight” photographs — there’s no overt manipulation of the negative or the print — they largely function as abstractions.

The romantic work is easy to love. Bullock could put together a stunningly beautiful photograph.  Furthermore, this work is imbued with a sense of mystery:  huge trees bend over a tiny child in Child on Forest Road, and in Navigation without Numbers, a child seems to float on a black bed spread that looks like a starless night sky.

Bullock seems to have reveled in the specificity of a large format photograph.  His romantic pictures generally are tack-sharp, foreground to background. The details are exquisitely rendered. However, there was something about this sort of photograph which evidently dissatisfied him, which leads us to the next group, the manipulated pictures.

The manipulated photographs are a more diverse group than the romantic pictures, and are more uneven. The slides of Bullock’s intensely saturated color light abstractions shown at a recent lecture at the High, rarely seen before this show, were a revelation. However, the actual prints are not as affecting. Something about reducing the scale of the picture from a wall-sized projection to a conventional-sized print saps them of some of their power.

A number of the manipulated photos seem like Bullock may have been more interested in the process used to make the picture than the picture itself.  For example, the solarized figure studies (from the 40s, early in Bullock’s career) and the photograms (from about 30 years later) lack the emotional kick of much of the rest of the work. They are formally and technically interesting, but that’s all.

The abstract close-ups are perhaps a bridge between the first and second groups. They are more “experimental” than the romantic work, but they are not the product of razzle-dazzle tricks. These photographs, despite being close-ups (in some cases, extreme close-ups), are enormously complicated. As High curator Brett Abbott points out in the show’s catalogue essay, there are hints of faces in many of these pictures, even though Bullock is photographing wood or rocks. For example, in Wood (1973) and Fallen Tree Trunk (1972), the patterns of the wood grain resolve into a countenance.

In the close-ups, Bullock seems to have found a way to couple the mystery and complexity of his romantic work with his evident desire to push beyond the documentary tradition.