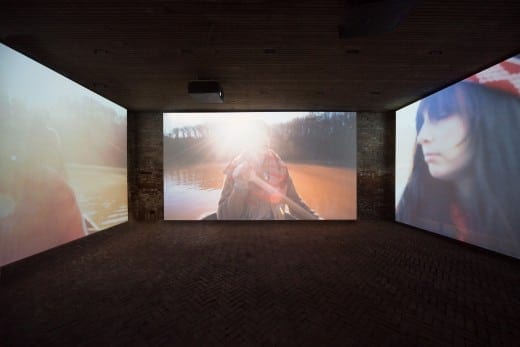 Micah and Whitney Stansell’s video installations confer with the present by way of elevating the past. Scarlet Air, the Atlanta-based couple’s sixth major video project, on view at Whitespace Gallery through May 10, addresses the hyperconnected maelstrom of the 21st century through musing on previous generations, particularly that of the artists’ older siblings, who were coming of age at the dawn of digitalization.

Dedicated entirely to thrift stores, vintage fashion and outmoded technology, Scarlet Air can read as the quintessential hipster project: though set in the 1980s, it is uncannily contemporary — its cast of retrofitted 20-somethings could be transplants from the 2014 future.

This dual generational consciousness gives Scarlet Air its edge. The three-channel video installation is as much a depiction of the past as it is an investigation of analog’s trendy revival within today’s youthful urbanites.

As coopted by the hipster mainstream, the predigital has become ironized and aestheticized, feigning sentimentality in hopes of achieving depth of meaning. But Scarlet Air employs this aesthetic in completely nonironic ways, making the work both relevant to the present generation while also recuperating the trend to genuinely heartfelt ends. The 18-minute loop moves through a constellation of interwoven vignettes, presenting an impressionistic portrait of a female protagonist coming of age in suburban, working-class America. The nonlinear narrative revolves around the young woman’s daily life and relationships, expanding and contracting to reveal the mundane minutiae of her day — hanging out in her bedroom, watching an ’80s sitcom on an old TV, conversing with a boyfriend on a rotary phone — while simultaneously signaling the wider cultural era she inhabits.

Half child, half adult, the protagonist commutes to a local thrift store, her place of employment, on a vintage banana-seat bicycle, sporting the same high-waist jeans seen in today’s ironic hipster fashion. She slips her time card into an old-school punch clock. Later, we see her rambunctious in the aisles, playfully wearing used merchandise while being speedily wheeled around in a shopping cart by her coworker friends. The sentiment is wistful and warm-hearted, capitalizing on the feel-good reveries of youth and simpler times.

Between each vignette, period items — VHS tapes, a Walkman and a rotary phone — lying atop a flowered bedspread become objects of quiet meditation. Whether you’ve spotted them at thrift stores or remember them before they became “vintage,” such items serve as emotional conduits between the viewer and the characters that employ them. The collective memory they evoke becomes warm and immediate, their used human residue permeating the film. But the thematic backdrop of the local thrift store does more than conjure nostalgia for the good old days, or offer loose insights on working-class subsistence. The thrift store is the central conceptual nexus within the work. A mecca of hipsterdom, the store is a dual lens to ruminate on the longed-for yesteryears, while also questioning the real impetus for hipsters’ bygone-days preoccupation. In her 2012 New York Times article, “How to Live without Irony,“ Christy Wampole criticized the 21st-century hipster as the embodiment of irony, a mere “walking citation” who is drenched in kitsch. In a recent Salon article, writers Matt Ashby and Atlanta-based Brendan Carroll respond to what the late David Foster Wallace referred to as the “oppressiveness of institutionalized irony” he saw sweeping American culture.

Which is why the appearance of nostalgia and sentimentality — when authentic and not ironic — is defined as taking a “risk” in contemporary art.  The Stansells’ risk taking is what gives Scarlet Air a human pulse. In different hands, its visual vocabulary could be easily remixed into an Urban Outfitters ad. Instead, the artists hijacked kitsch, gutted it of its lazy wit and re-presented it as something valuable.

While nostalgia is a central theme in many of their works, this homage to a former generation simultaneously subverts its effect, luring the viewer to pure sentimentality while also forcing a question of why this nostalgia exists in the first place. As though projecting themselves into the psychic terrain of their older siblings, the artists have formed a world where their attraction to a previous era is as comforting as it is self-scrutinizing, a generational ethnography for people like the Stansells to see their own train of thought.

Like many of their projects, Scarlet Air is overdubbed with an inner-ear-like ambient soundtrack (composed by Blake Williams) that triggers a strong feeling of interiority — like the sensation of wearing earplugs, except more melodic. While beautiful and effective, the more melodic parts occasionally produce moments of canned emotion that feel a tad commercialized.

There are also two additional voiceovers available on headphones that more narrowly interpret action, a plus or a minus depending on one’s preference. The first is the reciting of first lines of top ’80s hits. The second is an abstract narration written by poet John Harkey.

Scarlet Air shows an increasingly sophisticated vision, evolving from earlier works with overly generalized themes to highly nuanced productions that build on purposefully irresolute complexities of emotion. Setting them apart from the bulk of art being made today, Scarlet Air, along with their The Water and the Blood, reveal genuineness as a key motivation.