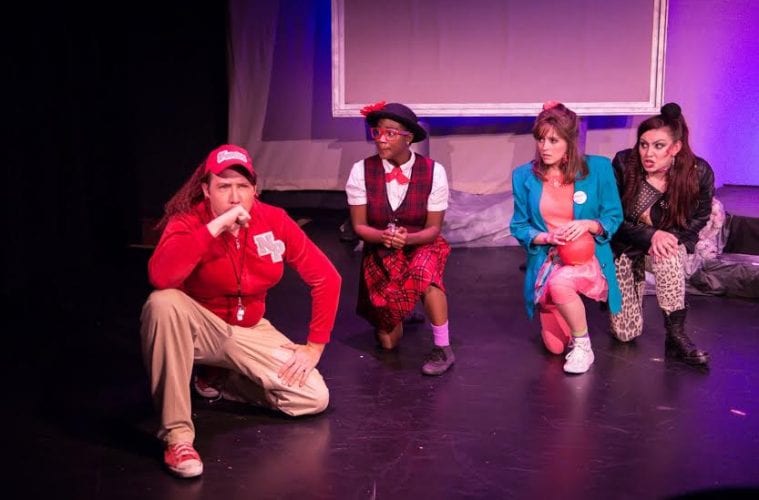 Review: For the Weird Sisters, Drago’s “Hot Pink” is a giant leap forward with a few missteps Hot Pink is most memorable for its surreal sense of fun. (Photo by Katie Cathell)

If you remember 1980s comedies like Sixteen Candles and Fast Times at Ridgemont High, you’re probably familiar with some of the problems faced by the three protagonists of Hot Pink, or Ready to Blow, a world premiere play by Atlanta playwright Johnny Drago currently at the Alliance Theatre’s black box space through August 30.

Hot Pink takes a satiric look at the familiar tropes of the ’80s, and — as the title suggests — the sexual mores of the era in particular.

Cadence (Casey Gardner), Brichelle (Parris Sarter) and Tatanya (Bryn Striepe) — or, in ’80s shorthand, the pretty one, the brainy one and the rebel — have to deal with absent and out-of-it parents, clueless teachers and vulgar come-ons from entitled jocks. There’s also the always present danger of being labeled by peers, whether it’s as a nerd or a slut, a deadbeat or a rich kid. Fitting or not, the label — you’ll remember from The Breakfast Club — can become a fate-sealing, inescapable prison.

But Cadence, Brichelle and Tatanya have even more to deal with than Molly Ringwald ever did. In Drago’s universe, the girls’ town of New Pompeii exists under an ominously rumbling volcano. Cadence’s dad, as mayor, helps organize the sacrifice of a virgin girl each year to appease the volcano and prevent an eruption. Virgins are seemingly getting harder and harder to find, however, and no matter how many victims are thrown in, the volcano still rumbles away.

The girls fear hearing their names among those summoned to the principal’s office over the intercom, a call which is slowly but surely emptying out all of their classes. They collectively resolve to do something to save themselves from being sacrificed as virgins and, well, you can probably guess what it is they decide they need to do.

The play is a commission by the Weird Sisters Theatre Project, an Atlanta theater company devoted to providing more opportunities for women in theater, and they worked closely with Drago in creating the work to fit the company. It’s a rare thing, and a welcome one, for an Atlanta theater.

The play’s basic set-up allows Drago to simultaneously parody the familiar tropes of ’80s comedies but also indulge in some of their cheesy fun. The work is at its best for its weirdly surreal combination of skit-like silliness and its subtle note of Brechtian dread.

A lecture from a parent, a dull math class, an irksome ride on the school bus, tacos in the cafeteria, the stuff in the foreground is familiar enough, and it’s adequately sent up here. But in the background is the threat of the natural world and mankind’s desperate helplessness in front of it.

It’s an unexpectedly fitting backdrop. As John Hughes and Molly Ringwald addressed across many films, high school is a brutal place. It’s civilized on the surface only, and the strong are always on the lookout for the weak to serve as scapegoats and sacrifices.

It’s especially fun to watch the ensemble cast of Topher Payne, Gina Rickicki and Bobby Labartino as they dive into multiple roles as teachers, classmates and parents. Payne’s beleaguered but enduringly gentle math teacher; Rickicki’s know-it-all, self-important brace-face; and Labartino’s been-there, done-it-all-twice jaded slaggard are all hilarious and dizzyingly fun for the way the actors limn the types so completely.

The characters are so defiantly themselves, they all end up seeming heroic in their own way. But Drago also utilizes some tiresome gay stereotypes. Coach Dykeman is the name of the androgynous female PE teacher, and classmate Bruce is a jazz-hands-brandishing, lisping musical theater geek. The characters are likely being brought on stage in an ironic way, as a send-up of  ’80s stereotypes, but they nonetheless drag a lot of the same problematic baggage with them.

Although things move along with reasonable efficiency, the play’s structure can feel surprisingly lopsided. The girls’ resolution to lose their virginity comes past the midway mark (it’s the ’80s, shouldn’t they have figured things out sooner?), and the central scenes in which they put their plan into action play out quickly, simultaneously and entirely for bawdy laughter. And there’s something about the ending, in which the girls face the volcano and come to some significant realizations, that feels rushed and reductive.

There’s fun to be had along the way, but in the end, the satirical target of ’80s films feels too easy for a writer of Drago’s talent; the approach’s shortcomings and limitations become obvious as the show goes on. The silliness can delight, but it can also grate. Moreover, the play’s underlying message — that it’s wrong to label women as sluts for their sexuality — isn’t idiosyncratic, thought-provoking, exceptionable or nuanced enough to be of real interest.

And it’s weirdly frustrating in the end to feel like everything — from silly ’80s movies to the natural world to sexuality — has all been laid out with the same wry, knowing wink, when some of those would have benefited from a very different sort of treatment.

Still, Hot Pink is most memorable for its surreal sense of fun, and the Weird Sisters should be rightfully proud of the new notch in their belts (so to speak). It’s no small accomplishment for a small, new theater group to commission and workshop original work from an Atlanta playwright. Let’s hope there’s more to come.