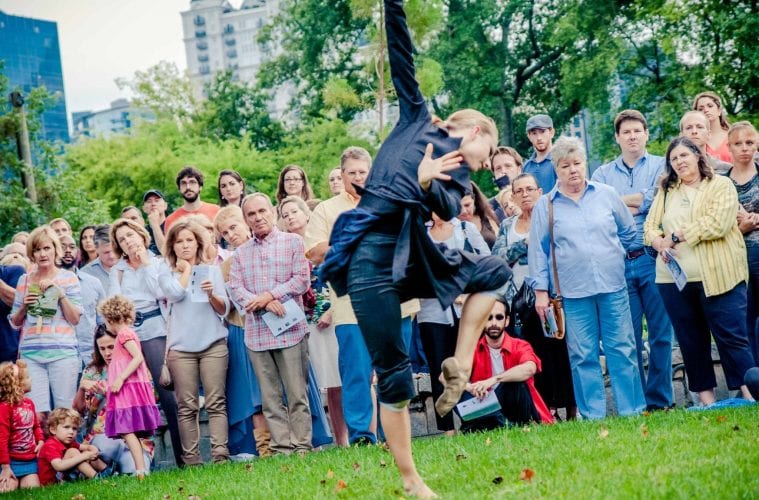 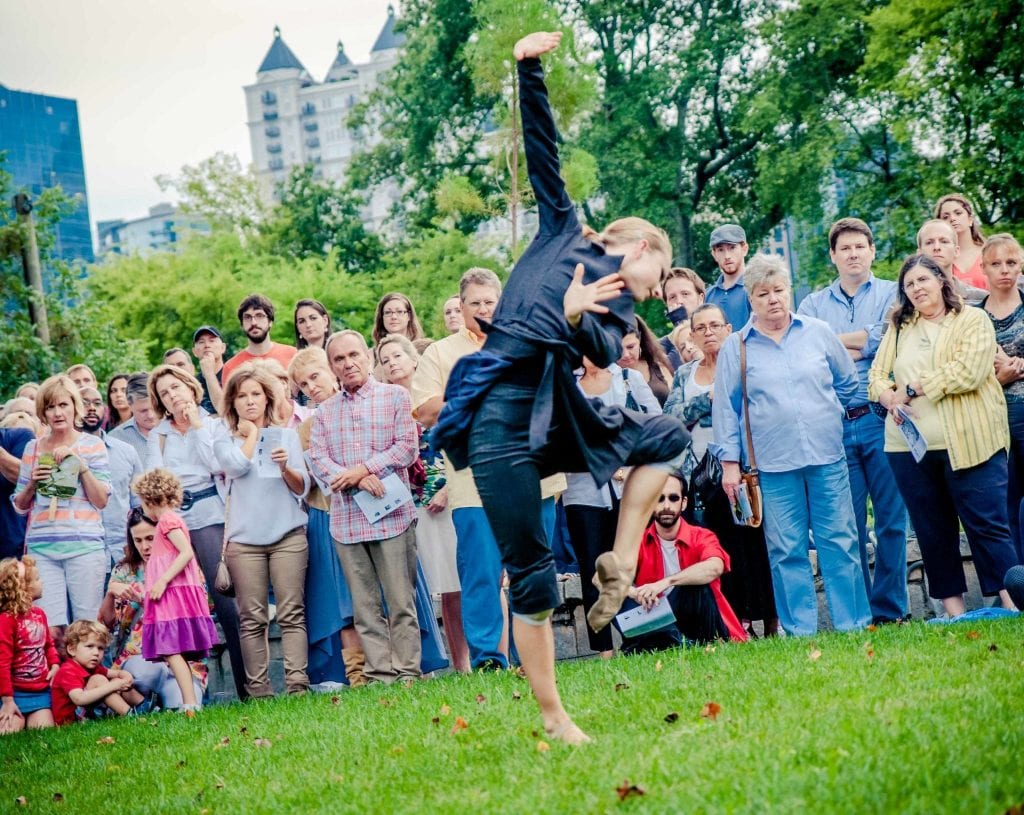 Now we all know: if it’s August in Atlanta, you may need a sweater. Wabi Sabi, Atlanta Ballet’s chamber dance troupe, brought seven new site-specific dances to various locations around the Atlanta Botanical Garden last Thursday, and the group will return to the garden this Thursday, August 22.

Last week’s performance coincided with the arrival of some unseasonably grey and almost chilly weather. It was decidedly strange. But in the end there was no rain, and it was cool, which beats the usual August heat hands down, and the slightly overcast sky meant no one had to dance or stand in blazing sun.

The evening opened with a fantastic and intimate solo performance by veteran Atlanta Ballet dancer Christine Winkler, who recently returned to the company after giving birth to her first son. The piece was set to music by Beethoven, but the most memorable bits were danced in silence along a narrow catwalk on the Crape Myrtle Path outside the Japanese Garden.

The piece — choreographed by Winkler’s husband, company member and Wabi Sabi founder John Welker (congrats to them both, by the way) — seemed to be about vulnerability and exposure, conquering both while finding an existential balance between interiority and exteriority. What became evident both from the audience and from the quality of the piece is that no one seemed to have come expecting dance to be a mere backdrop for an evening of socializing and imbibing in the garden. There were an attentiveness from the audience and a seriousness about the work that were great to see, and Winkler’s performance set the tone for the rest to come. 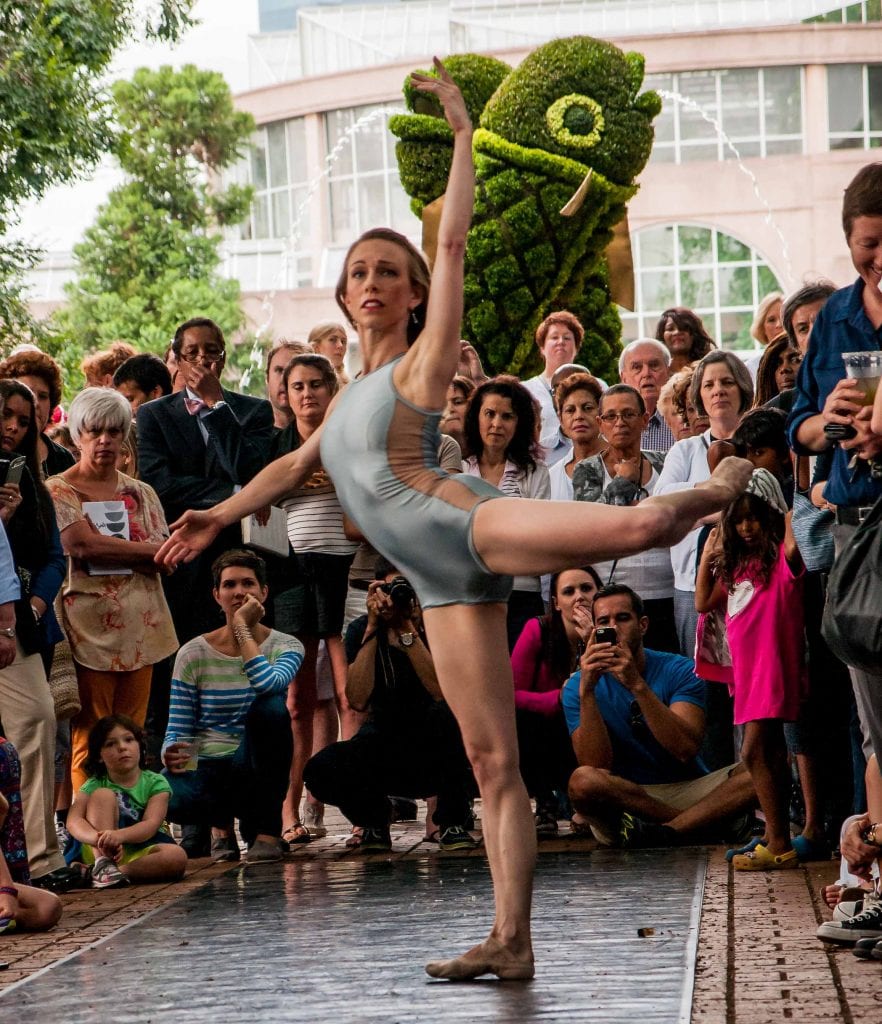 Christine Winkler in the garden.

Guest choreographer Rachelle Scott’s duet was set to the music of Max Richter and had the two dancers (Kelsey Ebersold and Kelly Prather) vacillate between tenderness and combativeness. There was also a smart understanding and energy in exploring three-dimensionality, with dancers working high, then low. At every point, I felt as if the composition was one I’d like to pick up and turn around to see from another angle, that it would be just as exciting if I were in another position. It was a prescient use of the space: audience members circled the dancers and looked on from positions above and level with the dance.

New company member Alexandre Barros made a strong impression in two dances: “Talk yourself down” by guest choreographer Gregory Dolboshian, a duet with Welker, and the ensemble piece “Sweet Sorrow” by guest choreographer Jennifer Archibald, which closed the evening. In both, Barros displayed an ease, flexibility and precision that were beautiful to see. “Talk yourself down” included some unusual movements, and there was never a moment that seemed awkward or transitional. I especially loved the inventive moments in which the two male dancers’ limbs, when brought close together, seemed to be drawn into parallel synchronous movement, as if by some weird magnetism or force of gravity. Barros’ central duet with company dancer Jackie Nash in “Sweet Sorrow” was likewise exciting.

Dancer Brandon Nguyen seemed to respond most deeply to the movement in guest choreographer Michael Smith’s ensemble piece “Intra Lobus Temporalis,” set to a soundscape by Animal Collective. Movements combined elements of the alien, the animal and the human, with an odd and unexpected touch of romanticism, and some wry physical comedy, detectable here and there.

Dancer Tara Lee, who is set to choreograph a piece for Atlanta Ballet next spring, continues to show considerable promise as a choreographer with “En route.” Designed as a duet with Nadia Mara and Jonah Hooper, “En route” had the sweetness and narrative charm of a silent movie. In the hands of a lesser artist, flowers as symbolism might irk, but the piece had an overall sense of wisdom and delight that were impossible to resist.

In all, Wabi Sabi created a beautiful evening at the Botanical Garden. There were a couple of performances where site lines were challenging, so I can’t comment on them, but overall I think there’s a growing understanding of how spectators interact with and watch dance in such an open and shifting environment.

If you missed last week’s performances, don’t miss this Thursday’s. Bring a bit of cash for the bar so you can get a glass of wine. And bring a sweater just in case.