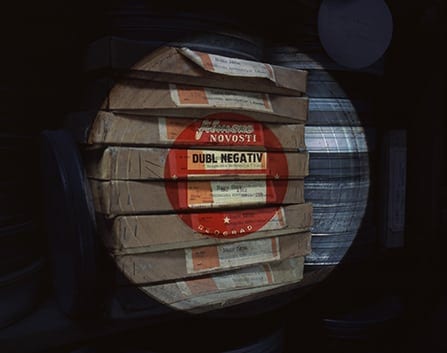 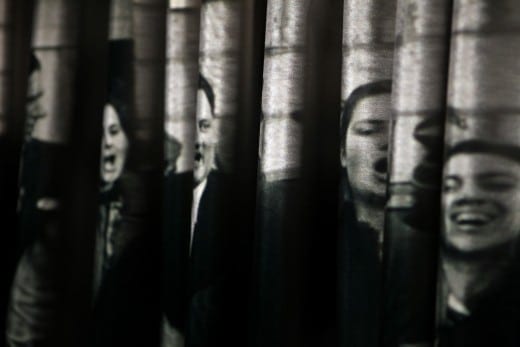 Documentary film and photography can be deceptive. Film seems to capture candid moments in time, when in fact the images we see are often artful fabrications. This commingling of reality and illusion is precisely what engages audiences. Vesna Pavlovic’s “Fabrics of Socialism,” an installation on view at Whitespace through November 23, scrutinizes how these slippery qualities of film and photography lend themselves to the construction of culture.

Using images from Yugoslavia’s socialist past, Pavlovic blends her own provocative photography with archival material related to the charismatic career of Yugoslavia’s Josip Broz Tito to create a powerfully nostalgic brew.

This installation makes us aware of how film and photography were manipulated in the service of a socialist vision, but also, and perhaps more importantly, how the resulting images continue to give pleasure and haunt us with wishful illusions. Through the reconstitution of film and photography, Pavlovic rekindles the state of mind that was capable of believing in great leaders, national unity and collective solidarity—transports us there, even though, as skeptical post-moderns, we are incapable of believing any of it.

Pavlovic, who currently teaches photography and digital media at Vanderbilt University, uses the two-room gallery space to create a kind of movie theater setting. The outer room, which exhibits Pavlovic’s photographs and a wall-sized archival photograph, seems like an antechamber to the real action in the interior room. The viewer is drawn there by the flickering light of projected film and an intriguing soundtrack. 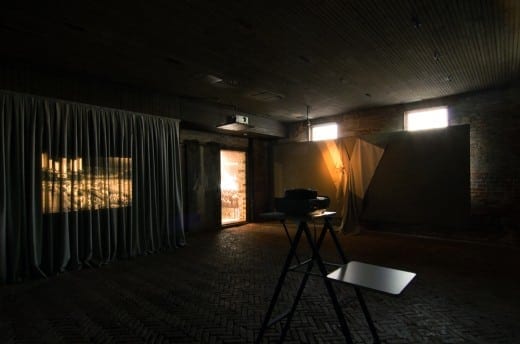 On one wall of the inner room, the artist projects a digitized copy of an archival 16-mm film documenting a national youth celebration of Tito’s 80th birthday, a spectacular event that purported to include all segments of Yugoslavian life and culture. In a performance reminiscent of China’s impressive display of lockstep choreography at the Beijing Olympics, hundreds of people (including the artist, then a child) marched in color-coordinated costumes to form living tableaux of socialist symbols – red stars, hammer and sickle – to symbolize national unity. Ironically, the state collapsed under the pressure of ethnic antagonism in 1990, a decade after Tito’s death.

Though mesmerizing, the film is a backdrop for the installation’s central undertaking – a series of slides from the Museum of Yugoslav History documenting Tito’s world travels. Pavlovic has set up a slide projector (itself a sort of relic) in the middle of the room, where it projects images onto a gathered, silvery curtain mounted on the wall opposite from the documentary film.

The shirred, shimmering surface of the curtain breaks the projected images into layers, creating a fluid, stereoscopic, mirage-like effect. These images are aesthetically gripping, and they make us aware that what attracts us is the distortion of the subject, not its accurate representation. The distortion could be created by the passage of time or the result of our own desire or the product of fragmented, de-realized, contemporary consciousness.

Photography, film and socialism were close comrades in the early 20th century. Film made great strides in the hands of revolutionary Russian directors like Eisenstein and Vertov, and photography came of age as an art form documenting the lives of ordinary, working class people. Both media cultivated their aesthetic depth articulating and propagating socialist vision, and both laid claim to documentary veracity.

However, as Pavlovic pointed out in conversation during the opening, the fruits of socialism were largely enjoyed by the bureaucratic elite, not by “the people.” Thus it seems that both film and photography evolved using the authority of documentary realism to perpetrate lies. But it is difficult not to love lies that are so aesthetically engaging. 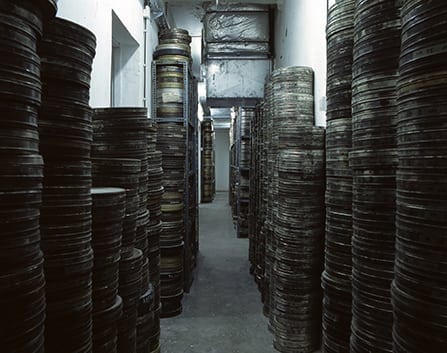 Pavlovic’s beautiful photographs, on display in the antechamber of the installation, are redolent with the romance of 16 mm film. In “The Archive,” a digital photograph, precipitous stacks of film canisters line the walls of a narrow corridor. The columns of canisters are inexplicably appealing; the layering of the different hues of the canisters and the effect of canisters stacked on canisters almost suggest geological formations. They transform a dingy bureaucratic basement into a space that engages our curiosity.

Just as the birthday documentary celebrating Yugoslavian unity is carefully orchestrated, Pavlovic uses intensely controlled photographic compositions to evoke the nostalgia of 16 mm film. In “Belgrade Conference,” a stack of mailing cartons is set at an angle to a stack of film canisters and lit to create a perfect circle. In other works, bits of tape fixing labels to film canisters show the slightest bit of shadow to make us aware of how the material is layered. A patina of rust and discoloration is rendered visually pleasing, and hand-signed government forms created on a ditto machine seem almost calligraphic through Pavlovic’s lens.

In a world full of ambiguity and uncertainty, it is hard not to look longingly toward a time that proffered answers and artistic media that seemed to tell the truth. Pavlovic’s work asks us interrogate that impulse at the same time we indulge it.