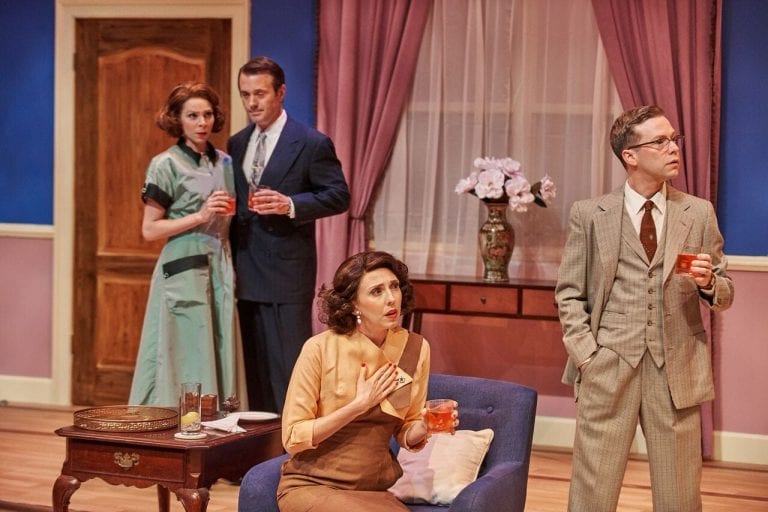 In Topher Payne's Perfect Arrangement, they seem like two well-adjusted couples. And they are, except not the two couples they present to the world. (Photos by Chris Bartelski)

At a time when discrimination and witch hunts are increasingly becoming the norm again, Theatrical Outfit’s new Perfect Arrangement feels like a lot more than just snappy entertainment — it’s mandatory, topical viewing, as well as a glimpse back at a sad moment in history.

Written by Atlanta’s prolific playwright Topher Payne, Perfect Arrangement — running at the Balzer Theatre at Herren’s through March 18 — had local origins, with a workshop version in 2009 and then a full Atlanta production in 2014 before making its Off-Broadway debut in 2015.

It’s set in 1950 in Georgetown, where the so-called Lavender Scare is raising its ugly head, and gays and lesbians are being sought and removed from federal employment. State Department employee Bob Martindale (Joe Knezevich) has been after Communists, and he is asked to expand his investigative scope to include so-called degenerates, including homosexuals. He and his secretary Norma (Courtney Patterson) both have a secret though — they are in same-sex relationships themselves. Bob is involved with teacher Jimmy (Clifton Guterman), while Norma is with Millie (Ann Marie Gideon). Yet they have found a way to pass — Bob and Millie are a married couple, as are Jimmy and Norma, and they all share a D.C. duplex. When night falls and the curtains are drawn in the living room of the Martindales (smartly designed by Nadia Morgan), characters pass through a closet — literally — to get to their desired living quarters and companions.

The first act is breezy and at times farcical as we meet the central characters and see the elaborate ways they go to pass as happy heterosexual couples. They make it all work, becoming accustomed to inventing reasons why they are at each other’s home. Yet the constant deceit and being on their toes at all times takes a toll on them, especially the women. The arrangement between Bob and Jimmy has lasted for four years, yet the women have been together considerably longer.

What the play does expertly is shift tones. It retains Payne’s patented sense of humor and smart dialogue throughout. For all its wit, however, the second act — arguably the sharpest writing of Payne’s career — is more dramatic, more urgent, as the characters struggle with the question of how long they are willing to keep up their façade. Giving up their identities will conceivably make them lose their jobs and more — but it will also give them freedom to walk down the street with their loved ones.

Payne writes fully realized characters, especially his women. The four here are splendid. The marvelous Stacey Melich, defiant and no-nonsense, is Barbara Grant, a State Department employee and a face from the past, and Ann Wilson has some droll moments as Kitty, a friend who doesn’t take no for an answer and also seems to pop up at the most inopportune time. Her comic timing is expert.

Gideon is fine, too, with many inspired moments and a real rapport with her costars. If there’s an MVP here, however, it’s Patterson. Just weeks after her bravura work in Aurora Theatre’s Maytag Virgin, she shows another side of herself. Her Norma is the one who poignantly longs to be herself and throw off the mask. Patterson is one of the most underrated performers in Atlanta theater — and one who can easily navigate between comedy and darker moments.

My only complaint here is that the women are all so vibrant that the men take something of a backseat. Knezevich and Guterman have some wonderful moments but don’t really click as a couple. Knezevich doesn’t seem at ease in the earlier light moments but does shine as Bob starts to see how the charade affects the growing number of people around him.

Credit has to be given to Tom Key, Theatrical Outfit’s artistic director, for staging a play with LGBT characters and affection between them. It’s a departure for the company and one that might ruffle some feathers for its core audience. Yet in his program notes, Key writes that the play transcends class, race, gender, sexuality, generations, politics or religion — and he is right.

Adam Koplan’s direction is brisk, and the show moves quickly, with an hour-long first and second act. He also carefully navigates the tonal changes.

Near the end, as the characters have decisions to make, one of them contemplates, “If I stay, it’s giving up the belief that things should be better.” It’s a heartbreaking line as members of the central four contemplate where they are headed — or if they’ll ever be able to be themselves. It’s a line from 1950 that — despite advances in the country — could easily pass for today.