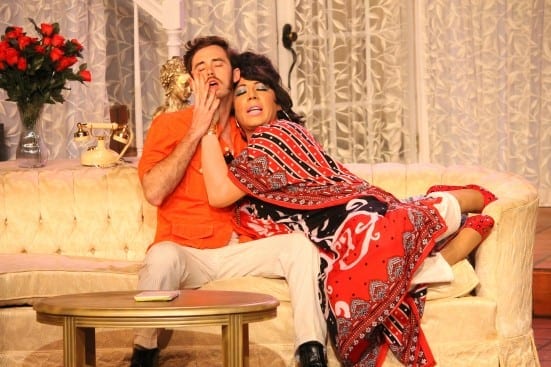 To say that “Die, Mommie, Die!” is a play about Angela Arden and her problems is something of an understatement. Ms. Arden doesn’t just face problems; she’s consistently confronted with outrageous crisis after crisis of the type typical of playwright Charles Busch. Busch came to fame in the late 1980s for the drag plays he wrote and starred in, in New York’s East Village, the most successful of which, “Psycho Beach Party” and “Vampire Lesbians of Sodom,” became two of the most often-produced stage comedies of the past few decades.

In a winningly silly new production by Process Theatre at OnStage Atlanta, running through May 23, playwright and actor Topher Payne plays the diva-in-distress as she plots a comeback and a couple of murders, deals with a son who loves to dress in her clothes, a daughter with a daddy obsession, an abusive husband, a blackmailing lover, a religious zealot maid, a LSD trip and probably a few other crises I’m forgetting.

In drag, Payne has a tanned, Liz Taylor-in-Malibu-in-the-late-’60s buxomness, a perfect match for the part (the play is set in the era), though vocally, Payne sticks closely to Busch’s tremulous, mannered stage presence which derives from films of the 1930s and ’40s (Busch starred in a film version of “Die, Mommie, Die!” in 2003). Stage designer Nadia Morgan obviously works with a limited budget, but it’s impressive that with a few touches she manages to evoke a sense of Hollywood Regency gone groovy, something that costume designer Nancye Quarles Hilley delights in eliciting as well with a series of blinding miniskirts, tight pants, patterned shirts, caftans and muumuus. The supporting cast members dive into their various roles and fittingly gnaw the campy lines, ludicrous situations, horrible puns and strained metaphors to bits.

It’s interesting that director Suehyla El-Attar picked up “Mommie!” rather than the done-to-death “Psycho Beach” or “Vampires,” but it might have been more productive to pick up one of the even more rarely produced Busch shows, one that hasn’t been done a zillion times or filmed (there are dozens of them: I think at his most prolific, Busch cranked out like one of these a week). Still, if you’re looking to kick off the summer by losing a few IQ points at a lighter-than-air, campy spoof, “Die Mommie Die!” is just the thing.