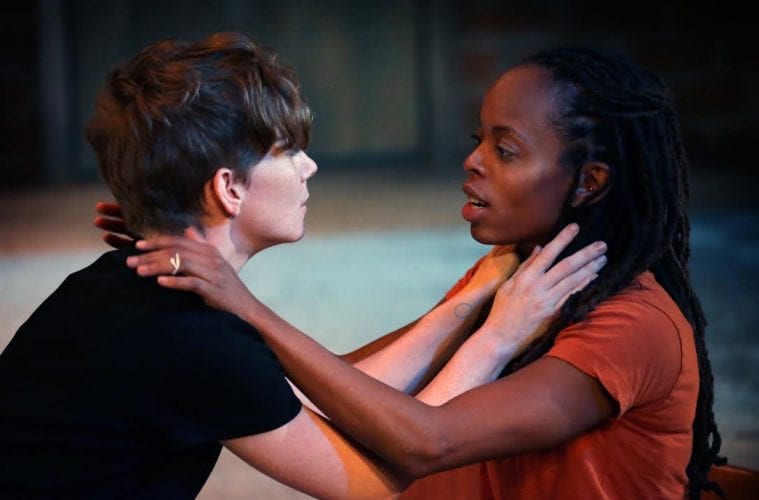 Review: Thoughtful and moving, “Cardboard Piano” is a play worth remembering

The dawning of the year 2000 — Y2K, as it was ominously called — was not the apocalyptic disaster that some would have led us to believe. A lot of things may have turned to crap in the early years of the new millennium, but the world certainly hasn’t stopped. Things apparently don’t just come to an abrupt end in quite that way. Even in the most extreme circumstances, even when radical political change turns the world upside down, even when lives are cut short by senseless violence, time still ticks forward and we’re left to pick up the pieces, struggling with questions of how to move on, what to continue to believe and how to forgive those who have thoughtlessly wreaked havoc on innocent lives.

These questions and many others are faced by the characters in the intriguing new play Cardboard Piano by the emerging young South Korean playwright Hansol Jung, currently having its Atlanta premiere at Actor’s Express through December 3. The opening act of the play is set, rather resonantly, on New Year’s Eve 1999.

In a small church in a village in Northern Uganda, two young women in love — Chris (Ashley Anderson), an American missionary’s daughter, and Adiel (Isake Akanke), a Ugandan girl — meet illicitly to hold a makeshift wedding ceremony and make plans to run away together (one of Chris’ first observations is a joke that the world doesn’t seem to be ending at the stroke of midnight after all). Things radically change direction, however, with the sudden and unexpected arrival of Pika (Stephen Ruffin), a young boy who has been conscripted into the infamous Lord’s Resistance Army and forced to commit acts of terror and violence by his commanders. Chris is determined to help Pika, but Pika is being pursued by a soldier (Rob Demery), and the situation turns explosive and violent, with an aftermath that haunts the characters for years afterward.

Cardboard Piano is a beautifully crafted play. There’s a shuffling of the cast between Acts I and II. (Spoiler alert: fifteen years pass between the acts. In the second act, some characters from the first act have died, new characters are introduced and an adult actor changes roles to play a child character from Act I years later). The device gives the straightforward narrative a curiously trippy, kaleidoscopic spin, the kind of development that otherwise might have audience members scratching their heads trying to remember who’s who, but in Jung’s skillful hands, it all remains natural and crystal clear. The play’s simple setting is one of its allures.

Anderson, who does a fine job in the first act portraying the main character Chris as a defiant and daring young girl, truly catches her groove playing the same character years later, as a more mature adult burdened by tragedy and experience. One of the interesting things about the play, among its many strengths, is the near invisibility of the playwright herself (Jung is originally from South Korea, with little connection to Uganda or the conflicts there). Cardboard Piano feels like storytelling in its purest form, a work of the imagination in which compelling characters are placed on stage and their situations and ultimate fates allowed to unfold in a seemingly unmanipulated and unmanipulative way, a rare sort of quality in contemporary playwriting.

Things are weighed down a bit, however, by the fact that five of the play’s six characters speak with accents. Although the cast handles this competently, it somehow still nonetheless slows things down with adopted accents. And the question of same-sex marriage, which lies at the heart of the play and must have buzzed with controversy and uncertainty at the time it was written, simply seems like a settled and answered issue for American audiences now. Everything that could possibly be said was said, and a path forward was chosen: disagreement may remain, but the electric buzz of pro and con is certainly gone, even if controversy remains in other parts of the world; watching a play that takes the topic on as a central subject makes all of this clear.

Still, the impressive play takes place in one small room, with a small cast of four actors (small even by small-play standards), but its overall outlook is enormously expansive. The story, while maintaining an intensely tight focus, extends tendrils outward into the world. It’s a moving, thoughtful pinwheel-within-a-pinwheel sort of story, whose characters and situations will remain in your thoughts long after the show comes to an end.