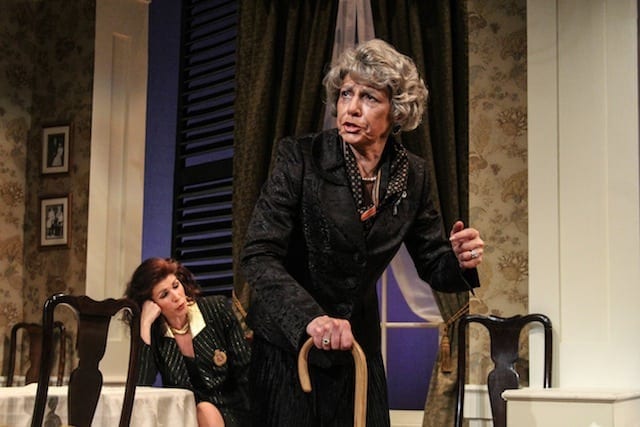 Although Horton Foote’s play Dividing the Estate originally premiered in 1989, it had the strange fortune of arriving on Broadway in 2007, around the same time as Tracy Letts’ blockbuster, Pulitzer Prize–winning drama August: Osage County. The two plays — each lengthy epics about sprawling, bickering families ruled by no-nonsense matriarchs, each set in large, old houses in isolated small towns, each riffing on themes of human greed and pettiness — are similar enough that it may have been hard to get theater-goers excited about both works at the same time.

I realize my opinion is a slightly heretical one, and I likely won’t have many on my side, but the current production of Dividing the Estate at Theatrical Outfit, running through April 20, has me thinking that Foote’s play is actually the better one. It’s certainly as good.

Horton Foote might not be a household name, but the writer had an enormously long, distinguished, prolific and varied career. Born in 1916, just five years later than Tennessee Williams, Foote started out as an actor, but eventually wrote for the stage, television and screen. He’s perhaps best known for the screenplay for the 1962 film adaptation of Harper Lee’s novel To Kill a Mockingbird, for which he won an Oscar, and for writing the script of the 1983 film Tender Mercies, for which he also won an Oscar. He received the Pulitzer Prize in 1995 for his play The Young Man From Atlanta (Theatrical Outfit did a memorable production in 2011, starring Tom Key, who directs this version of Dividing the Estate).

Rattling off the titles of Foote’s works and the honors he received really only scrapes the surface of what the prolific writer accomplished. He is the author of a nine-work autobiographical series of plays called The Orphans’ Home Cycle. The fictional town of Harrison, Texas, where Dividing the Estate is set, was also the setting for many of the more than 60 plays by Foote. The writer died in 2009.

In Dividing the Estate, Foote gives us the Gordons, an old property-owning family in Harrison, a small town on the Colorado River outside of Houston near the Gulf Coast (this is green, hilly, farm-country Texas, not flat, sandy, cactus-and-cowboy Texas: Harrison is based on Wharton, Texas, where Foote grew up). 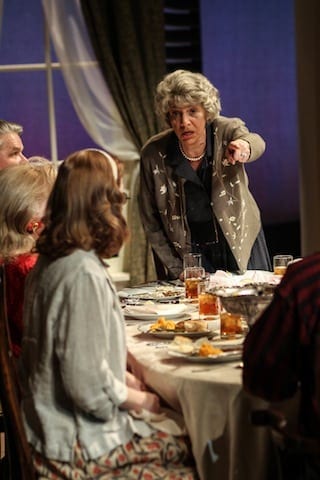 Old money is no money as the saying goes, and the Gordons’ wealth is starting to dry up. The adult children plead with the no-nonsense, iron-fisted and plain-spoken matriarch Stella (Mary Lynn Owen) to divide the valuable estate to give them more control and easier access to the money, a step which she staunchly refuses to take. It’s a stubbornness that’s seemingly served her well: all the other homes are gone from the neighborhood (the street outside is now a highway) and we’re told that the farmland is surrounded by gas stations and fast-food joints. That’s what comes, Stella points out, when people don’t fight to hold on to their land.

As with August: Osage County, it’s a long, interesting, darkly funny, many-peopled story. Where it surpasses August is in its richness, its sense of history, present and future; the sense of complicated, if unsavory, relationships between its people. The Westons of Osage County were cruel, selfish, shallow and coarse, and so are the Gordons in their way. But Foote’s story is sociological as well as psychological.

Foote wrote often for television, and the tone here is occasionally easy, broad and familiar. Sometimes in the lines, the pacing, the humor, or even in the arrangement of characters on stage, you’ll detect little tinges of Designing Women or Steel Magnolias and the like. But there are also lovely and convincing touches of The Cherry Orchard, The Little Foxes and Cat on a Hot Tin Roof, so go figure.

Tom Key masterfully directs a splendid ensemble cast: everyone brings something of interest to their roles. I was especially impressed with Marianne Hammock as the adult daughter Lucille, a part the actress seems to slip into and inhabit effortlessly, as if she’d been born to play it.

The family’s relationship to the African American servants is paternal and patronizing. It’s not a lovely thing to see, but it is likely how such relationships would have existed in the milieu Foote is depicting. Foote complicates and develops these characters, but they remain peripheral and servile. It’s understandable if some theater-goers might feel uncomfortable or dissatisfied with such a framework being brought to the stage.

The set, by designing sisters Isabel A. and Moriah Curley-Clay, is lovely and detailed as always. They create the rooms of a big old Victorian-era house with an enormous tree looming behind it. (I did, however, keep wondering which of the characters brought the Rubik’s Cube into the house and how it was left to sit in such a prominent place for so long. I thought for sure someone would pick it up and solve it in Act II, but it just sat there to remind us that it was 1987.)

It would be easy for a theater to do Dividing and August in rep: you could practically use the same set and cast for both shows. Audiences could then divide according to which play they preferred. And if I were alone in skipping August: Osage County and sitting in on Dividing the Estate a couple times, I’m more than comfortable with that.