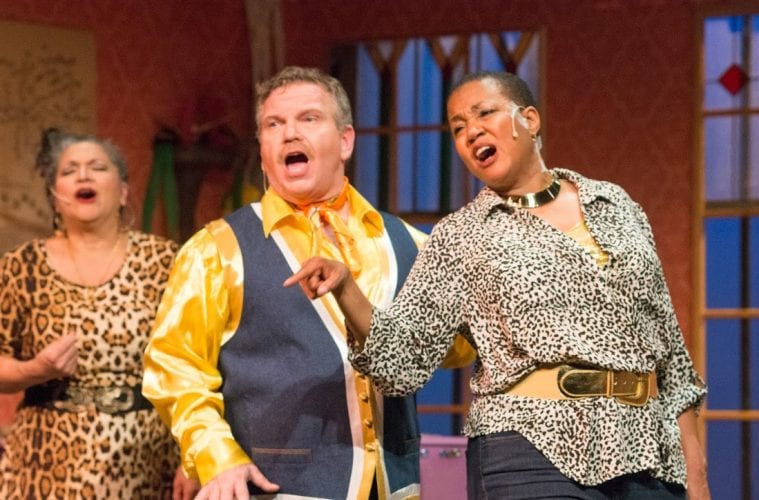 Wes is a young, gay social media influencer who has moved to New Orleans after a failed stint in New York to try to pull a Hail Mary for his fashion career. He decides to open a boutique in the French Quarter in what was formerly the UpStairs Lounge, a popular gay bar that closed after a devastating fire on June 24, 1973. When he has a chance encounter with history and is transported back to the popular hangout at the end of Gay Pride weekend, he sees just how far the community has come for him to be more worried about branding on Instagram than being out in public. This is the crux of the musical The View UpStairs, which is onstage at Out Front Theatre Company through November 10 under the direction of Paul Conroy.

The show is based on the actual fire at the UpStairs Lounge in New Orleans and premiered Off-Broadway at the Lynn Redgrave Theater in February 2017. Librettist Max Vernon has written a very important story about an event that Americans cannot afford to forget. The fire left 32 people dead and was the most devastating hate crime at a gay club until the 2016 shooting at Pulse Night Club in Orlando.

Eyewitnesses said that the body of one of the bar owner’s was left hanging out of a window for two days before it was removed. The incident has been retraced in the book Tinderbox and the documentaries Tracking Fire and Upstairs Inferno. Unfortunately, Out Front’s production does not give this story the treatment it deserves.

Larkins’ performance, however, is one-note as the bratty Wes, whose change of heart seems like it’s forced by the script instead of the character’s journey. His performance lacks emotional depth, which is a disservice to such a fun character. Hayes has a good voice, but is not at all believable as a man living a double life as a family man and a piano player at a gay club. And Quinn Hernandez doesn’t make the most of what could be boisterous moments onstage in tacky dresses and fun wigs. Conroy has directed a fun show, but the ensemble doesn’t quite deliver.

There are a couple of standout performances: Perry’s voice and energy are a delight to experience, Dilley has fantastic comedic timing and Felicia Hernandez, whom audiences might recognize from the Theatrical Outfit production of In the Heights, is a masterful performer.

Kudos are also due to costume designer Jay Reynolds, who left no platform heel and bell bottom on the cutting room floor. Willie’s white suit and Richard’s green suit are the best kind of polyester hot mess. Charles Swift, who does double duty as light and set designer, has created a wonderful reimagining of the lounge, complete with colorful lanterns, mismatched furniture and a floral purple piano.

The biggest issue with this production is the sound quality in the theater. The night I was there, the feedback from the microphones was terribly distracting, the actors couldn’t seem to hear the band clearly in order to keep up with the pace of the music and the band was louder than the performers.

That said, Vernon’s writing masterfully goes between kitschy, campy comedy and a firm message about the need to bridge the generational divide in the LGBT community. A powerful yet funny scene shows how dating has evolved, and not yet arrived for gay men. Willie talks about having to guess who’s what based on a look in the fifties, Patrick mentions cruising in bathroom stalls in the seventies and now Wes is swiping right on Grindr, but there’s a veil of secrecy for the sake of protection that hangs over each era. It’s evidence for Wes that there is still more work to do in the present.

This is not the type of musical with songs that will get stuck in your head, though the show’s opening number, “Some Kind of Paradise” — which does a really nice job of bringing the audience into the UpStairs Lounge — comes close. Wes’ number “The Future is Great” is also a fun number in which he tells the bar patrons everything they’ll never see happen over the next 40 years.

What certainly has happened, according to Vernon, is that becoming a brand has taken precedence over becoming a contributing member of a community and that the future can’t afford the disconnect. The message is pointed, and though Out Front’s production has the best of intentions, it doesn’t quite hit the mark.