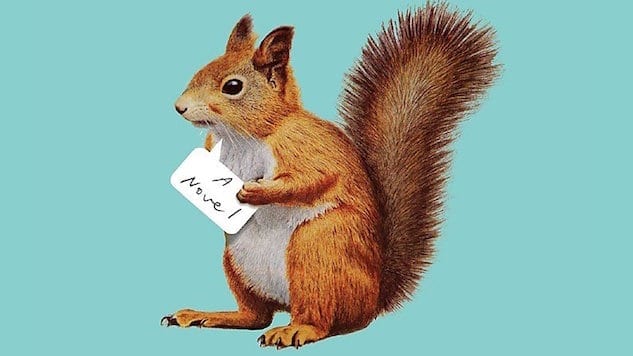 The comedic charm of Elizabeth McKenzie’s The Portable Veblen is completely disarming and one of the things that make the book so incredibly effective. At its root this is a book about survival of the less fit; its characters are racked with mental illness, psychosis, depression, PTSD and narcissism alongside hypochondriacs, conspiracy theorists and a woman who thinks the squirrels are telling her not to get married. Yet, with all of these disorders stacked against these characters, in McKenzie’s capable hands they are painfully relatable and vivid.

Let me set the scene for you: in California, Veblen Amudnsen-Houda, a self-proclaimed “independent behaviorist, experienced cheerer-upper and freelance self,” who puzzles together a life through temp work and Norwegian translation, is proposed to by her boyfriend, Paul Vreeland, a rising star in the medical community whose ambition is only matched by his anxieties. Everything seems ideal, but the ever-optimistic Veblen can’t shake the sneaking suspicion that something is awry in their relationship. (“Behind them, the squirrel made a few sharp sounds as if to say he had significant doubts.”)

It’s not until their families get involved that things really go haywire. Paul’s parents are tried-and-true hippies. His disabled brother, Justin, is convinced he, too, will be marrying Veblen in the spring.

Paul has survived by rebelling, defying his parent’s nonconformist leanings and taking his ideas straight into one of the largest pharmaceutical empires in the country. He’s developed a tool that relieves pressure on the brain from injuries in combat and, after a chance meeting with an heiress to a pharmaceutical empire, finds himself surrounded by the temptations of consumerism and fully entrenched in not just the big money medical business, but in the military world too.

Needless to say, his sheltered, flower-power upbringing has left him completely unprepared for the level of corruption and greed he is suddenly regularly interacting with.

Meanwhile, Veblen’s mother, who’s so afraid of losing her daughter’s affection that she’ll fake just about any illness for attention, seems determined to sabotage her daughter’s relationship. Veblen’s stepfather is a classic enabler who only exacerbates the situation. Oh, and her biological father? He’s institutionalized.

In the scheme of archetypes within dysfunctional families, Veblen is a classic peacekeeper. At times painfully passive and accommodating, Veblen retreats into her own magical world — a tiny bungalow she’s renovated herself. Here, squirrels talk to her and the center of the universe is her namesake, Thorstein Veblen, a long-dead and historically misunderstood economist and sociologist. His portrait hangs on her wall, and she stares at it to keep herself at peace. (Slight spoiler, but in one highly amusing scene, Paul punches the portrait in the face in a fit of jealousy.)

The pressure of marriage and societal understandings of success cripples the young couple. Suddenly the small fissures in their relationship are magnified.

In an interview with Literary Hub in February of last year, McKenzie attested to the fact that this book actually started out as an anti-war novel: “I started this book when Bush was still president . . . I didn’t know it was going to take me this long to write it.” That bit of knowledge brings the text into a whole new light — fans of absurdist characters like Lieutenant Nately and Captain John Yossarian of Joseph Heller’s Catch-22 will feel like they stumbled into a bit of a family reunion. The Portable Veblen, in that tradition, is equal parts dark comedy and absurdist.

Though a slight aside to the novel’s overarching plot, some of the book’s most poignant moments, and most brilliant writing, take place within the VA hospital where Dr. Vreeland is testing his prototype on wounded veterans, as with this scene with one of the book’s minor characters, Sergeant Major Warren Smith:

He itched in his bed, and called it a trough. He craved sun on his skin, or the fresh air tickling the hairs on his arms, or the warm glow of a real lightbulb by his bed. He missed the grease on his fingers after a taco and tuning the radio to get rid of the buzz. He heard water pouring from a spigot in the earth, washing the streets, bubbling up the best of life from the mantle and spewed away at a train stop, the witchery of men and stop watches.

And though enrapturing prose like this would lead one to wonder what would have come from McKenzie keeping her focus on her original mission — penning an anti-war novel — Veblen, Paul and their dysfunctional-yet-affable families are not without battle scars of their own. And so The Portable Veblen stands as a testament to how weightier lessons can be so artfully delivered when trusted with such a capable and poetic mind as Elizabeth McKenzie’s.

Elizabeth McKenzie will discuss The Portable Veblen with ArtsATL Executive Editor Laura Relyea at the Wrecking Bar on Thursday, January 26 at 7 p.m.