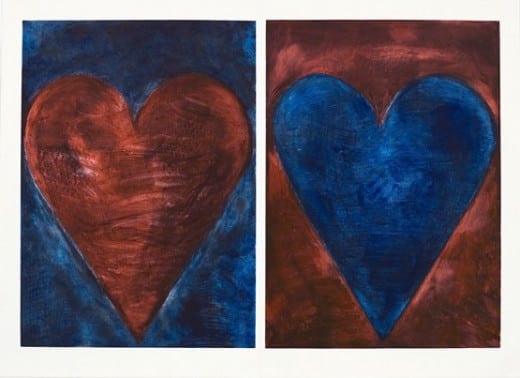 Dine has always demonstrated a keen intellect and wit. Over the decades of his prolific career, he has favored a number of autobiographical motifs, such as tools (a reference to his family’s hardware store), a bathrobe (a stand-in for himself) and a valentine heart (representing his wife). Emblems of everyday life also used as symbols of mass production, they have appeared in a variety of media including sculpture, assemblage, painting and printmaking.

Dine’s well-known imagery of hearts, represented here by the prints “The Magnets” and “Wallace Ting,” is bold and graphically well conceived, although its clean commerciality seems to date it. While similar works would have been groundbreaking in the Pop Art era, these 2010 incarnations do not stand up as well. It is not difficult to imagine them as greeting cards: they are similarly pleasing and well designed but don’t rise above cookie-cutter mediocrity. Dine often employs multiple printmaking techniques. “Orange Birthday Robe,” for example, is a mixture of watercolor, crayon, lithography, woodcut and etching. Owing to this richness, the print is a delight — a blotchy roux of hot and cold colors, splashed about in a kind of Fauvist frenzy. Its well-balanced riot of color and its loose, playful lines make it feel fresh and current.

With the etching “Landscape of Things,” the artist returns to one of his favorite muses, Pinocchio, a character imbued with a host of postmodern psychosexual allusions. Dine has set two Pinocchios in a very expressionistic black-and-white field cluttered with various tools and implements. Whether the tools are for the boys’ use or of their imminent destruction is unclear, but the tension in the composition and the moodiness of its chiaroscuro marks suggest the latter.

Pinocchio, a fixture in Dine’s repertoire since the 1960s, has been interpreted as a facile allegory for illusionistic sculpture: the wooden boy who dreams of becoming a real one. Unfortunately, one such example, “Pink Wash,” has already been sold and removed.

Mize categorizes his paintings as self-portraits, regardless of the subject matter. He skillfully grapples with autobiographical signifiers, such as personal photographs of family, his home and his environs, using them as a stepping-off point for his colorful, abstracted compositions. In both “Burn Out” and “Umbrella,” Mize deconstructs a house and other architectural elements, reducing them to simple angles and blocky geometry in strong compositions that speak to a sense of place, perhaps of home. Light and form take center stage, and in “Umbrella” in particular, a bold use of sun-drenched hues ups the ante.

His strongest works, though, are those with a central figure. Mize’s work has increased its thematic depth even as his abstractions of the figure have become more pronounced. With “The Witness” and “Artist,” he plays upon the visual effects created from speckled nuances of sunlight, rendering his subjects as glossy, globe-like clusters of atomic particles. They serve concurrently as studies of the way we perceive the world and as metaphors for the way we are one with our environments. Mize’s “Artist,” in acrylic on wood.