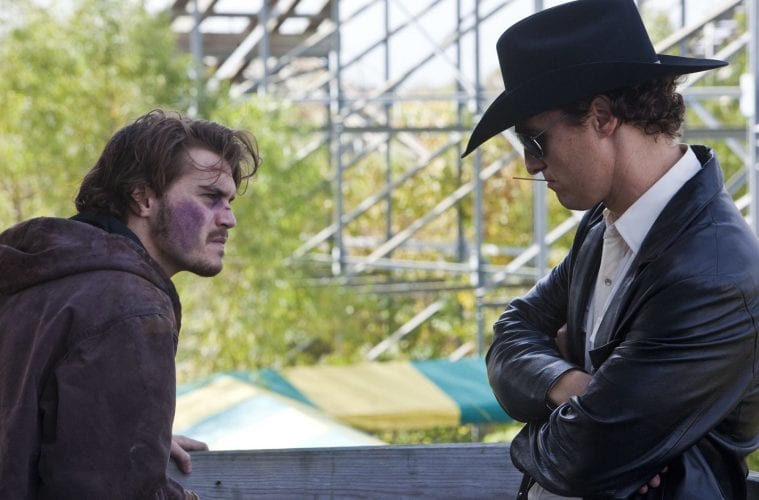 The world of playwright Tracy Letts is not for the weak-hearted. Whether it’s a trailer-trash family conspiring to off one of their own for a payday in “Killer Joe,” a paranoid makeshift couple convinced that they’re doomed in “Bug,” or a large dysfunctional clan sinking verbal daggers into one another in “August, Osage County,” his work is anything but nice and cozy.

Directed by William Friedkin, “Killer Joe” is a pulpy tale of double crosses and darkness set in Dallas. The film begins as drug dealer Chris (Emile Hirsch) finds himself in more debt than he can handle, due to a loss of inventory. Realizing that his mother has a life insurance policy, he conspires with his father, Ansel (Thomas Haden Church), and Ansel’s new wife, Sharla (Gina Gershon), to murder her and split the money. No one seems to like the mother anyway — even Chris’ teenage sister Dottie (Juno Temple) doesn’t wince at the idea of her being gone.

Ansel and Chris set up a meeting with “Killer Joe” Cooper (Matthew McConaughey), a cop who also does murder for contract. Joe has a steadfast rule about taking his cash in advance of the job, but he’s willing to bend it when he sees vivacious Dottie twirling around on the street outside. He bargains to take her as collateral until he gets his money.

When Joe’s work is done, however, all does not go according to plan.

As a stage work, “Killer Joe” doesn’t quite have the punch of “Bug” or “August, Osage County.“ The first play that Letts wrote, it’s simple and lacks dimension. But it absolutely crackles on screen, thanks to veteran director Friedkin and his performers. Friedkin directed a lukewarm film version of “Bug,” but this is a world he seems to know and relish. From the wrappers strewn around inside a mobile home to the pit bull terrier chained up outside the trailer park to the seedy strip clubs, Friedkin creates a real sense of place. While he finds some dark humor in it, he never condescends to these people. The noose that poor Chris has around his neck just gets tighter and tighter until it practically pops. When blood flows, it does so in streams.

In Joe, the family meets a character who seems destined to one-up them every time. No detail escapes his attention. He’s cool and calm, utterly thorough and by far the smartest person in the room, although with this group that’s not saying much. Joe can turn from icy killer to charismatic lover with ease. His courtship of virginal Dottie is eerie and sickly fascinating as they bond over a tuna casserole.

“Killer Joe” is rated NC-17, and for once that rating seems appropriate, with both actresses fully nude and disturbing violence scattered throughout, including the much-talked-about climactic chicken leg sequence between McConaughey and Gershon. Although all the cast members are exceptional, it’s McConaughey who takes the film in his jaws and chomps hard. How he has morphed from just a pretty face into a character actor in the likes of “Bernie,” “Magic Mike” and “Killer Joe” is one of the more interesting movie developments of 2012.

If “Killer Joe” can feel a little stagy at times, and the final scene is ambiguous and goofy, the cast still gleefully wallows in the material. Friedkin keeps a nurturing rein on them. It’s a great comeback for him and proof that the man behind “The Exorcist” and “The French Connection” can still get the job done.