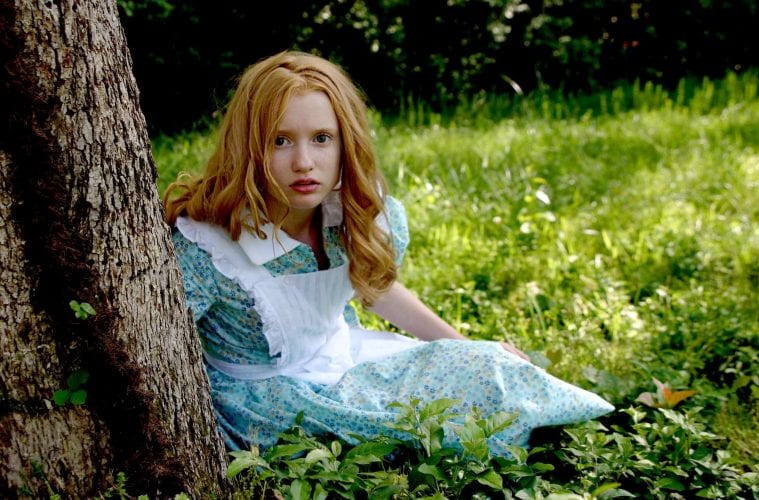 In Serenbe Playhouse’s new take on Lewis Carroll’s “Alice in Wonderland,” the main character’s fall down the rabbit hole is a goofy, creative one, even if there are some bumps along the way.

This world premiere, playing through July 28, is a revisionist look at the Carroll classic by playwright Rachel Teagle, who crafted an original version of “The Ugly Duckling” for Serenbe last year. In Teagle’s vision, young Alice (Skylar Nicholson) wanders upon a group of actors in the forest who make her the star of their production.

Alice is an introverted girl, and the six members of the troupe take her in to help her find her imaginative side. A little bit of “potion,” and soon she is hanging out with the likes of the Rabbit (Laura Sack) and the Cheshire Cat (Ralph Del Rosario). Along the way are a very flamboyant Tweedledee (Cody Brown) and Tweedledum (Evan Goetz), the Mad Hatter (Holly Schoolmeester) and the sinister Queen of Hearts (Stephanie Zandra Peyton), who threatens to behead everyone.

Now in its third season, Serenbe Playhouse is known for its creative takes on classics and its outdoor settings. “The Ugly Duckling,” for instance, had its main character come in and out of water when needed. Seeing a show at Serenbe is an event.

“Alice” is being staged at the outdoor Forest Glen Stage, with little in the way of a set save for a piano and several crates, which the actors use strategically. Tucked away in the forest, with the troupe greeting patrons, ominous music in the background and bubbles floating around, this “Alice in Wonderland” is children’s theater that rises above what usually passes for children’s theater, with plenty of atmosphere. As directed by Serenbe Artistic Director Brian Clowdus, it’s done in the spirit of commedia dell’arte, with the ensemble, except for Alice, wearing masks to bring Carroll’s characters to life. Clowdus brings a dream-like quality to the production.

Teagle’s script has some imaginative moments. The tea party is droll, with some adult jokes thrown in.

It’s a short show, only an hour long, and is well paced and entertaining. But it’s not quite as bold as it pretends, or as much fun as it could be. The staging feels simultaneously innovative and scaled back.

The role of Alice, even in the finest versions of “Alice in Wonderland,” isn’t necessarily that interesting. The characters she meets along the way have always seemed to make her trip more vibrant. That’s much the case here. Clowdus and Teagle try to give the character a back story, but the other performers demand more attention.

Clowdus has stated that he was open to casting an adult in the Alice role until Skylar Nicholson auditioned, but in her he has found someone age-appropriate. The young actress, already a stage veteran, is game and certainly looks the part. But she doesn’t yet have the range of her adult counterparts, who are all quite enjoyable, especially Peyton and Del Rosario.

Overall, the production benefits from its crafty staging. Children will like it and adults will appreciate the tweaks, even if it doesn’t quite reach its stride. It certainly whets one’s appetite for Serenbe’s forthcoming production of “A Midsummer Night’s Dream.”