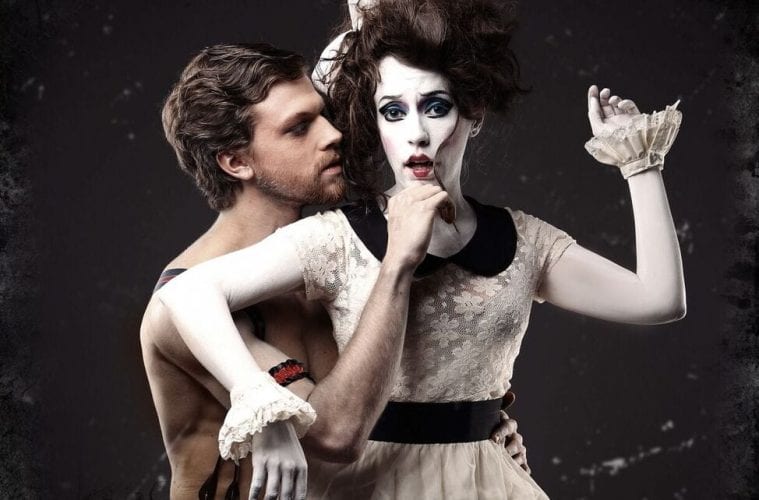 Review: Serenbe puts on a great show, but “Carousel” is a musical past its expiration date

Serenbe Playhouse and its artistic director Brian Clowdus have become masters at outdoor “event” theater — and the company is back with their take on Rodgers and Hammerstein’s Carousel through April 10. ArtsATL theater critics Andrew Alexander and Jim Farmer share their thoughts about the show.

Jim Farmer: Hi, Andrew. We both saw Carousel this weekend, albeit on different nights. What did you think?

Andrew Alexander: Well, it’s interesting because the nights we saw the show were very different indeed. Serenbe’s new production is set outdoors on a real carnival fairway, and the night I went, just my luck, there was rain. The show must go on, as they say, and we all moved indoors to watch a concert version, so I’m especially curious to hear what you thought of those outdoor staging elements in action. There’s a lot to go over, but I’ll say in brief I’d often wondered about the show’s great reputation — Time magazine recently named it as the 20th century’s greatest musical. But it’s also seldom produced. That initially seemed almost irreconcilable to me, but having seen the show for the first time, I kind of understand both: its rep for greatness and also why it’s almost never put on nowadays.

Farmer: Here’s my take. I am not a huge fan of this musical. When it comes to Rodgers and Hammerstein, The Sound of Music is my jam. Yet I can see why so many people admire it. This version is directed by Clowdus, and the scenic design is by Adam Koch. Koch has created a wonderful atmosphere, with a Ferris wheel hovering over everything, a merry-go-round nearby, omnipresent games/booths, and all sorts of carny folks running around. And then the show starts and it’s just … so small. The environment dwarves what is already — to me — an overrated musical. Alexander: The concert version seemed to isolate and highlight some problems with the production. The singing of individual cast members was often pitchy, and the problem persisted longer than I could explain away as just opening night jitters or discomfort with the last minute change of venue. It was a problem. These great songs just need giant, flawless voices to come across successfully.

Strangely, things improved during big moments (it was quieter passages that proved challenging for the cast) and I have to say the chorus sounded incredible. Truly fantastic. It must be an Atlanta thing. The acting wasn’t flawless throughout, but I did like the general approach which somehow brought out the central narrative story as a pretty moving one. That stuff about ascending into heaven at the end was beyond old-fashioned and corny. It just seemed downright bizarre and almost unsalvageable. Your thoughts? Did the cast actually use the carousel during the performance, by the way?

Farmer: They wove in and out of it. I think for a version of Carousel to be engaging, it needs tight casting. Sadly, I just didn’t find that the case here. This is largely the same cast from Serenbe’s 2014 version of Oklahoma! I had the exact same thought here — the leads (Kelly Chapin Martin as millworker Julie Jordan and Edward McCreary as barker Billy Bigelow) are pleasant, capable singers, but they lack the oomph they need as central characters. Surrounding them here — quite vividly — are the likes of Jessica Miesel as Carrie, Daniel Burns as Enoch, Austin Tijerina as Jigger, Ally Duncan as Nettie and Lala Cochran in three roles. The leads are the least interesting cast members and, as was the case in Oklahoma!, I didn’t find much chemistry between them. I would have loved to have seen this with Duncan and Burns as Julie and Billy.

Alexander: Serenbe also did Streetcar last year, and maybe because of that I started to see Billy and Julie as another expression of the Stella and Stanley story, and the leads kind of fulfilled that vision with interesting, nuanced performances. That aspect of the story came alive for me, in other words. Lala was great but none of the roles she played gave her enough opportunity to be funny, which was a nice element of Oklahoma! — she was a hilarious Aunt Eller — that may have been missing here. Did you get a chance to ride the rides or play the games by the way? On the rainy night, it all looked fun but a little empty and forlorn as you can imagine. Farmer: I didn’t. We walked around a bit, and had popsicles. But I would have loved to have been able to ride the rides and do more beforehand. I think that’s the main problem I had. It’s not a musical I find to be a classic, especially with its dated, “it’s okay that my husband hits me” sentiment. Look, no one puts on a show like Brian Clowdus. He understands that his job is to create an event and he does that. I will never forget sitting in a meadow watching the cast of Hair sing like their lives depended on it. But to me, I was endlessly more fascinated by the surroundings here than I was by almost anything on stage. I have to ask — what did you think of the ballet sequence?

Alexander: Yeah, the wife abuse stuff was, um, troubling to say the least. Maybe there should be a trigger warning? If you’ve ever cared about women, you may find elements of this show problematic. There is a seductive old-fashioned “Sure was a real nice clambake!” hokey nostalgia about the show and the fair Serenbe has created. It all fits together nicely, but in the context of black eyes and “he hits me cause he loves me,” it’s … strange. It made me understand why the show isn’t done more often. Songs and story are great but that element is a doozy. As for the ballet sequence, the show lost me at the whole “I’m marchin’ up to the Pearly Gates” thing, so I wasn’t on board. Having said that, I liked choreographer Bubba Carr’s movement throughout, though I saw it all play out in an indoor space where it often seemed cramped.

Farmer: I was a little ambivalent about that myself. I thought it was nicely danced and choreographed, but it did feel cramped, too busy on the stage. As well, if you aren’t familiar with the musical already, you might wonder what the heck is going on in the sequence. I do like Carr’s work though. I thought his “Blow High, Blow Low”’ sequence — a manic number with almost the entire ensemble — was easily the high point of the evening.

I should also issue a warning — during Act II a huge amount of fog/smoke came from underneath the stage to convey Heaven. It completely engulfed the section we were in for about 30 seconds. We were literally in a cloud. Hey, I love me some immersive theater and this was a nifty effect. But I felt like I was in a John Carpenter movie — I was waiting for Adrienne Barbeau to pull me to safety. So as always with an immersive show, be prepared for the elements! So Andrew, final thoughts?

Farmer: I don’t mind the drive, but my thumb is half up, half down. I think that the production itself will be enjoyed mostly by Carousel diehards, but the spectacular carny world Clowdus and Koch have envisioned is likely to be embraced by a lot more folks.