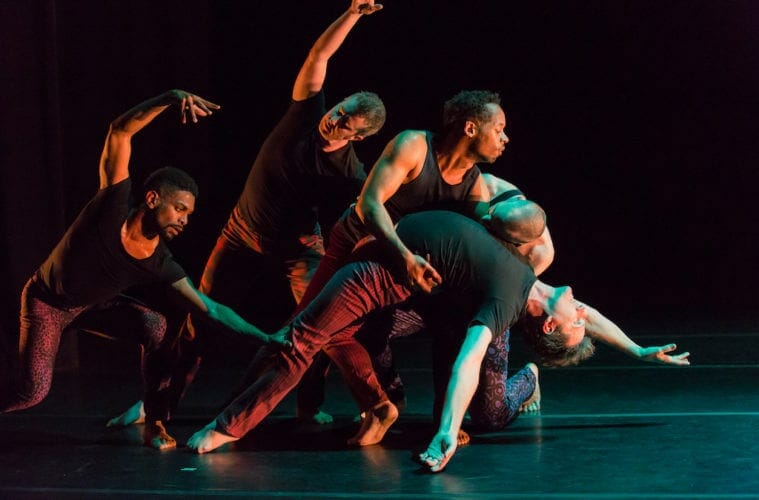 "Boys in Trouble" has humor and insight as it explores expectations of masculinity. (Photo by Kegan Marling/courtesy of Sean Dorsey Dance)

Considered the first transgender modern dance choreographer, Sean Dorsey has become one of the most exciting and talked-about performers around. In show after show, Dorsey tackles subject matter many dare not confront.

Describing Boys in Trouble, the newest work from his San Francisco-based Sean Dorsey Dance, can be challenging. The production — dealing predominately with toxic masculinity — is a compelling hybrid of dance and theater, featuring monologues, music and moments of power and intimacy.

Boys in Trouble opened Thursday, September 12, as part of a 20-city tour, with Atlanta being its first Southern stop. It runs through Sunday on the 7 Stages mainstage, and the engagement includes such special events as “Art of Activism: A Conversation on Toxic Masculinity” from 1 to 3 p.m. Sunday. 7 Stages co-commissioned this work.

Dorsey, who was born female and began to transition as a teenager, leads the company, now celebrating its 15th season. An all-gay troupe, the ensemble includes Dorsey, Brian Fisher, ArVéjon Jones, Nol Simonse and Will Woodward.

Dorsey spent more than two years traveling the United States and meeting with people, hosting community forums and teaching trans-supportive dance workshops. It was during that time that Dorsey came up with ideas for this piece.

It’s a personal work. Dorsey opens it by talking about what it means to feel different — sharing the fact that leotards were an unapologetic part of growing up — and the slow discovery (and loneliness) of not being like everyone else. Sitting at the back of a bus is easier, Dorsey suggests, than being at the front and enduring questioning stares.

Boys in Trouble may sound heavy, but it’s not afraid to be funny or even silly. The most humorous sequence, “Let’s Talk About Whiteness,” examines white privilege in today’s culture. The piece also skewers butch queerness and the notion in the LGBTQ community about how masculine one needs to be.

7 Stages has a history of working with the company, staging Dorsey’s The Secret History of Love in 2014 and The Missing Generation — which dealt with how AIDS affected gay and trans people in the 1980s and featured interviews with the likes of former Atlantan Jim Grimsley — in 2016. I enjoyed Generation a touch more, but there’s no denying Boys in Trouble has some indelible images and touches and a wondrous imagination.

It’s nothing if not ambitious, taking on the notion of masculinity and how men are expected to behave with and in front of each other. The production also touches on body shaming, racism, bullying, queer identity and more.

It’s a lot of show and goes on for a bit too long. If Boys in Trouble seems a little overstuffed with themes, it’s still highly theatrical, and the stories and individual sequences really stick, with poignancy and sequences of naked truth.

Overall, it’s quite empowering. One of the signature images in Boys in Trouble — brought to life by Jones and Woodward — is a pas de deux depicting how two black men come together and love one another, at first circling each other, exploring space and boundaries, touching, embracing and literally spilling all over each other. It’s sensual and emotional.

Another sequence finds a dancer — Simonse — in a strapless dress and toe shoes performing a solo number. It’s executed to perfection and is incredibly timely as well, in light of Lara Spencer’s recent comments about boys and ballet classes on Good Morning America.

The dancing here is athletic — Dorsey likes to use the phrase “full throttle” — and inventively choreographed. Yet it’s the personal tales that linger the most. With Boys in Trouble, Dorsey continues to be one of the most brave, playful and vital voices around.