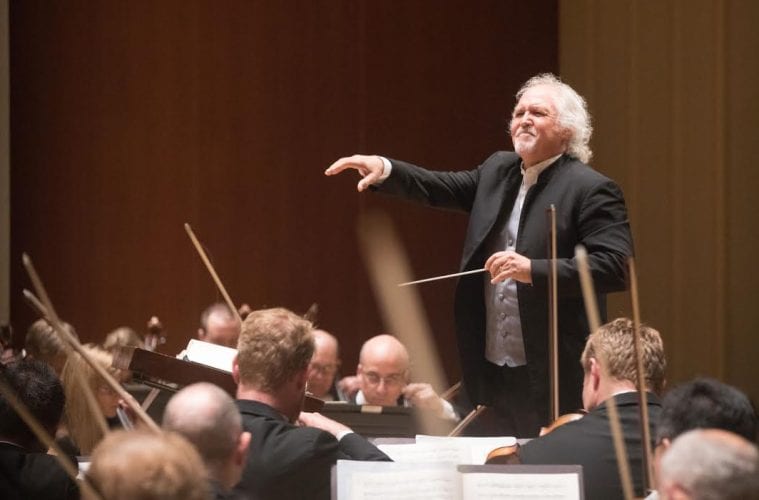 On Thursday evening at Symphony Hall, the Atlanta Symphony Orchestra and Chorus, led by principal guest conductor Donald Runnicles, performed an all-French program of music by Debussy, Jolivet and Fauré. Featured soloists for the evening were ASO principal flute Christina Smith, soprano Kim-Lillian Strebel and baritone Matthew Worth. The program will be repeated Saturday night at Symphony Hall.

Earlier this week, the ASO announced that their contract with Runnicles will be extended for an additional two years, through the 2018–19 season. Runnicles began his tenure as principal guest conductor during the 2001–02 season following multiple guest appearances beginning in 1999.

In addition to his ASO duties, he is also the general music director of the Deutsche Oper Berlin, chief conductor of BBC Scottish Symphony Orchestra and music director of the Grand Teton Music Festival in Jackson Hole, Wyoming. Runnicles will make his sole appearance in the 2017–18 ASO season on November 16 and 18 leading the orchestra, chorus and guest soloists in a performance of Beethoven’s “Missa solemnis,” which he last performed with the ASO in January 2016.

Thursday’s concert opened with “Nocturnes” (1899) by Claude Debussy. Its three movements — “Nuages” (“Clouds”), “Fêtes” (“Festivals”) and “Sirènes” (“Sirens”) – were inspired by a series of impressionist paintings by American artist James Abbott McNeill Whistler, also entitled “Nocturnes,” evoking subjects as seen at night or twilight, or in indistinct or indirect light. Scored for large orchestra, Debussy himself wrote that these were not “nocturnes” in the formal musical sense of, say, those of Chopin, but more akin to Whistler’s paintings with “all the various impressions and the special effects of light that the word suggests.” ASO principal flute Christina Smith made the most of her moment in the spotlight.

Runnicles drew forth a languid tempo at the opening of “Nuages,” which allowed the music to breathe rather than feel rushed — like a placid movement of clouds across an open blue sky. The more forward, dancing rhythms of “Fêtes” evoked the atmosphere of a nighttime celebration, summoning occasional flashes of light. “Sirènes” invoked the seas, and its waves illumined by moonlight, with the women of the ASO chorus providing the mysterious, wordless song of the mythological Sirens embedded in the movement’s texture.

Next, ASO principal flute Christina Smith was featured soloist in Flute Concerto No. 1 (1949) by André Jolivet. Jolivet wrote the 13-minute concerto for flutist Jean-Pierre Rampal, and it has become an important part of the standard repertoire among flutists, even if the average symphonic concert-goer may be less than familiar with Jolivet. Scored for solo flute and string orchestra, the concerto’s form is somewhat in the manner of a Baroque sonata da chiesa (“church sonata”) with its four brief movements in slow-fast-slow-fast order, although there is only a single break in the middle, effectively dividing the piece into two halves.

Jolivet’s style is an amalgamation of early 20th-century modernisms that had emerged by the end of World War II, leaning naturally toward those that influenced French composers. So the piece may seem a little quirky at times, but it features a lyricism that includes just enough virtuosity to be present but not overstated. Smith brought those primary elements through well in her performance, and Runnicles kept the strings in balance and brought them into the foreground when the music warranted.

The concert concluded with a frequently performed choral/orchestral work, the Requiem in D minor, Op. 48 by Gabriel Fauré. Fauré composed the first version of this work in 1887 and 1888. Although what would eventually become the “Libera me” movement had already been written as an independent work a decade before in 1877, it was not included in this first version of what Fauré then called “un peitit Requiem,” which had only five movements: “Introit et Kyrie,” “Sanctus,” “Pie Jesu,” “Agnus Dei” and “In Paradisum.”

By 1890, he added an “Offertory” and the “Libera me” to complete a second version of the work, which premiered in 1893. A third and final version, rescored for full orchestra, was completed in 1900 and premiered that summer during the Exposition Universelle in Paris — and it was that version heard in Thursday’s ASO concert.

Baritone Matthew Worth, who was heard as Lieutenant Audebert in the Atlanta Opera’s production of Kevin Puts’ Silent Night this past November, displayed a lucid voice with a mildly reed-colored timbre in his solos in the “Libera me” and the “Hostias” section of the “Offertory.”

Soprano Kim-Lillian Strebel, who had previously been heard on the ASO stage in last season’s performance of Beethoven’s “Missa solemnis,” was featured in only one movement, the “Pie Jesu” — often heard performed by itself in church settings. Strebel has a bright, clear soprano, but exhibited a little bit of force in her upper range. One wished for more liquidity, in the sense of being able to float the high notes rather than push them.

The full ASO Chorus did its part well, though it’s hard to imagine such a skilled chorus not knocking it out of the park — it’s such an oft-performed work among respected church and community choirs. In keeping with the mode of the entire concert, it was not overdone. There was an appropriate degree of restraint that suits the music. It is not intended to be the high drama of, say, Verdi’s “Requiem.” One could easily argue in favor of the smaller forces required by Fauré’s second version on that basis, but this more fulsome one works quite well in a large symphonic hall.