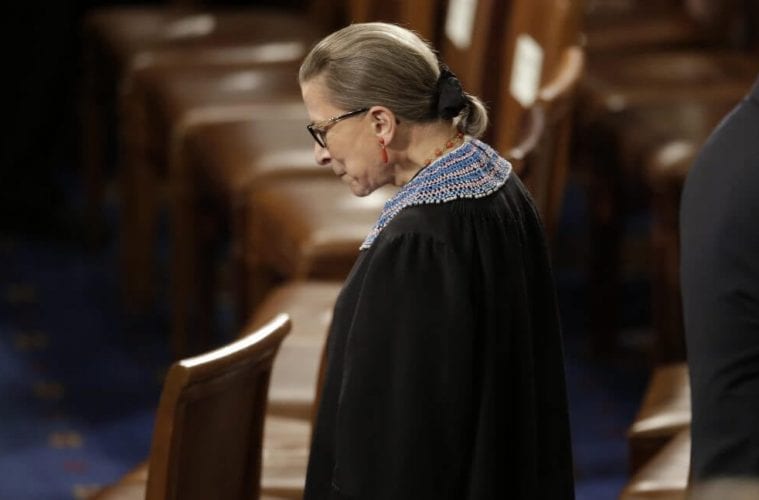 At the start of RBG, angry men offscreen call the Supreme Court justice a witch, vile, a monster, an evildoer. Donald Trump, of all people, fulminates that she has “no respect for the Constitution.” Aside from these ludicrous calumnies, this engaging though not especially penetrating documentary is pretty much a love-fest for Ruth Bader Ginsburg. I’m okay with that.

Now 85, Ginsburg was already in her sixties when nominated for the Supreme Court by Bill Clinton in 1993. By then, she’d spent several decades redressing the imbalance of equalities afforded women versus men. In 1970, the film reminds us, women could be fired from their jobs for getting pregnant, they had to have their husband’s co-signature when applying for a credit card, and in 12 states, men could legally rape their wives.

The first case Ginsburg argued at the Supreme Court was 1973’s Frontiero v. Richardson, addressing a military inequity: While male soldiers were given housing allowances for their spouses, female solders were not. The plaintiff, Sharon Frontiero, recalls that at that time, “‘Nice’ girls didn’t file lawsuits.” What’s fascinating about Ginsburg’s early cases is how clueless the men who dominated the legal system were about the uneven playing field. “I did see myself as kind of a kindergarten teacher in those days,” she says, “because the judges didn’t think sex discrimination existed.” It had just never occurred to them. Men ruled the world, and thus — they believed — it always was. As her longtime friend, the professor Arthur Miller, puts it, “She was creating a legal landscape.”

Not merely a summary of Ginsburg’s legal career, RBG gives us insight into the pretty, petite and driven young woman who captured the attention of her temperamental opposite, her outgoing husband, Marty. His support extended not only to making the family meals (Justice Ginsburg is a famously lousy cook), but to leaving his lucrative Manhattan tax-attorney practice to follow her to DC when she joined the court. The movie delivers a lovely portrait of a marriage.

Though friends and colleagues describe her as a super-serious workaholic (for most of her adult life she has stayed up working till 4 a.m.), Ginsburg has a good sense of humor about herself. She giggles delightedly when shown Kate McKinnon’s hyper impersonation of her on SNL’s “Weekend Update.” And, on being caught napping during a State of the Union address, she admits, “I wasn’t 100-percent sober.” (By implication, she wasn’t the only Justice who had tanked up a tad in advance of a dull night of presidential speechifying.)

The film’s talking heads include people you’d expect — friends, family and figures including Gloria Steinem, NPR legal affairs correspondent Nina Totenberg, and President Clinton. Near the end, RBG touches on the backlash Ginsburg received when she criticized Trump during his presidential campaign. And she’s asked about having second thoughts about not stepping down while Barack Obama was still in office, when he might have replaced her with a younger liberal justice. But for the most part, the documentary avoids uncomfortable politics, or regret.

Opening May 18, Boom for Real: The Late Teenage Years of Jean-Michel Basquiat purports to be a partial biography of the young artist. It’s just as much — if not more so — a character sketch of New York City as it metaphorically burned in the late 1970s, while spiky-haired punk artists hustled to be the phoenixes rising from its ashes.

While it’s sometimes hard to remember, these decades later when Manhattan is now impossibly pricey, the city was a virtual war zone teetering on bankruptcy in the late ’70s. “The city was burning down, literally,” says graffiti artist Lee Quiñones, who recalls gratefully retreating to the quiet of the train yards where he and other young artists used the subway cars as their canvases. One of these was Al Diaz, who teamed up with homeless 16-year-old Jean-Michel Basquiat, tagging walls and trains with the name SAMO (for “same ol’ shit”). Diaz says the tag SAMO was his idea, but as an early example of Basquiat’s self-focused drive toward fame, he appropriated it as his own once the urban brand started getting recognized in the growing Lower East Side art scene.

Boom for Real works best as a time capsule of a period when people made art — and slept — anywhere they could, and used anything at hand for their work. It was a raw, heady time where anything seemed possible, especially when everyone was buzzing all-hours on cocaine. The movie documents the fatal turn when the Mafia pushed to replace coke with heroin. The party headed toward an end for superstar street artists like Keith Haring (dead of AIDS in 1990) and Basquiat (dead of a heroin overdose in 1988).

Though the film is full of video clips of the young artist — bruisingly handsome yet slightly feral — we never really get a sense of who Basquiat was. Perhaps his furious ambition was the real him. That’s easy to think, anyway, until the documentary starts focusing on the jagged, shout-out-loud power of his paintings. Forget all the anecdotes of the aging scenesters populating the film. The artwork seems to tell us more about the artist than any words or biographical details could.

RBG. A documentary by Julie Cohen and Betsy West. Rated PG. 98 minutes. At Regal Tara 4 and The Springs Cinema & Taphouse.