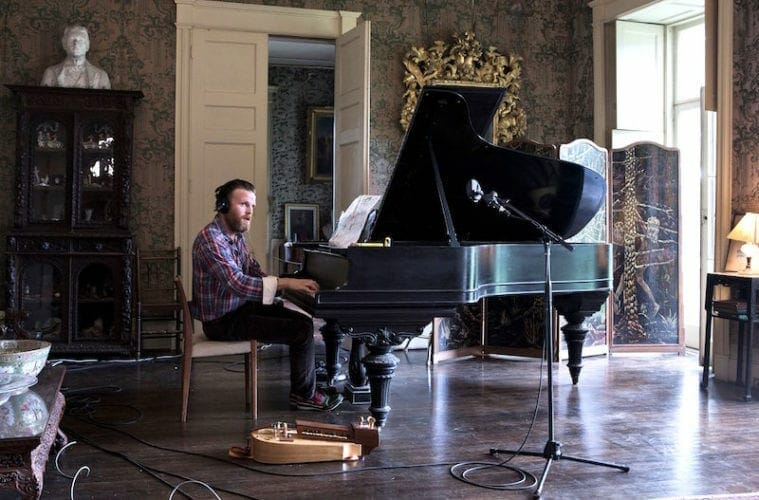 "The Visitors," a nine-channel video work by Icelandic performance artist Ragnar Kjartansson, is on view at the High Museum of Art through May 9. (Photo by Elízabeth David)

Review: Ragnar Kjartansson’s “The Visitors” dates to 2012 but is perfect for this moment

The Visitors, a nine-channel video artwork by Icelandic artist Ragnar Kjartansson has toured the globe. Major museums from Guggenheim Bilboa to the ICA in Boston have shown the work, which was commissioned by the Migros Museum in Zurich in 2012. When it was shown in London, The Guardian declared it the “best work of the 21st century!”

The exhibition, on view at the High Museum of Art through May 9, is in two galleries. In the first is a series of small handmade postcards that Kjartansson created and sent to Dallas art patron Marguerite Hoffman as a commissioned work. These 415 postcards, made over 14 months in 2010 and 2011, are drawn in crayon and markers with childlike scrawls that chronicle the most mundane experiences, from what the artist had for lunch — “SOUP” spelled out above a rendering of a bowl and spoon — to the feelings of anxiety he had about the forthcoming birth of his first child. These precious objects that reflect the intimate relationship between artist and patron steer your attention in the right direction for The Visitors.

When entering the second gallery, one immediately sees the nine screens, each with a video of a single person playing an instrument in an interior room of an elegant but decaying mansion, the paint peeling from the walls. Together, they sing and play a song that is like a chant the sirens might have sung to lure sailors, so hypnotic is the melody. The entire work is 64 minutes long, a short period of time for this artist whose endurance works sometimes last for days or months. 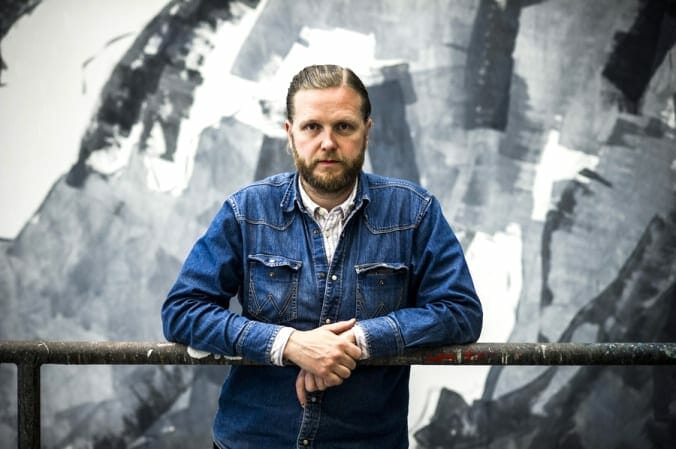 Ragnar Kjartansson uses video, vocalists, musicians and theater in his performance art, which is often long-term and repetitive to create collective emotions.

The End, an earlier work presented as Iceland’s pavilion at the 2009 Venice Biennale, was a performance that took place over the course of six months. It consisted of Kjartansson at an easel painting portraits of an artist friend who was posing wearing only a Speedo, drinking beer and smoking cigars in a room on the ground floor of a palazzo overlooking the Grand Canal. As the beer bottles piled up during the performance, the artist made 144 paintings. The End was a performance of art-making that articulated Kjartansson’s ideas of the romance, nostalgia and humor in the practice and persona of an artist.

The Visitors also reflects a romantic vision of the artist’s life. It is tender and comic, a dream set in an interior reflective of an artistic bohemia of the past. A main character is Rokeby Farm, the crumbling 19th-century mansion in upstate New York once owned by the Astors. Its rooms are like interiors found in paintings from another time period. Kjartansson invited a group of musicians from Reykjavík to spend a week with him there to make a work of art. While in residence, the group played music, ate, drank and smoked cigars. On the final day, they filmed The Visitors with nine cameras and the help of many technicians.

The title is in homage to ABBA’s last album, The Visitors, released just before the band split up and members went their separate ways. Kjartansson’s reflects on his recent divorce from Ásdis Sif Gunnarsdóttir, who wrote the poem from which the song’s lyrics are taken.

Over and over again, the musicians sing and play this song in their separate rooms, alone but for a camera and linked by headphones through which they hear one another. With a rhythm that is repetitive and circular they sing, “Once again I’m falling into my feminine ways.” “There are stars exploding around you / And there is nothing (nothing) you can do.”

A scene from “The Visitors,” a nine-channel video with sound, from 2012. (Photo by Jana Chiellino)

Kjartansson is naked in the bathtub playing his guitar and singing. There’s a woman in a room playing the accordion, a man in another room playing the drums and five other musicians. One screen shows the artist’s local friends out on the porch and, on the lawn, two guys set up a small cannon for a big boom like in the 1812 Overture. The sound and the images are layered; the viewer moves from screen to screen as a witness to this performance. The emotional impact of the repeated refrain and the musicians’ accomplishment of having played it in isolation from one another is powerful. At the end, the musicians on-screen pop open a bottle of champagne. In the gallery, viewers’ elation is palpable.

As the musicians finish the song, Kjartansson lights a cigar and others get up and join each other in their respective rooms, then go outside. It is not a spoiler to write that they move off together from a verdant lawn into the landscape of the soft mountains of upstate New York. The Visitors is the romantic vision of a dreamer with a sense of humor, who knows the significance of the pastoral landscape in the history of American art. Kjartansson is in love with America and the 19th-century Hudson River School paintings that were made in this idyllic countryside.

Atlanta is often late to the party in presenting world-class contemporary art. The Visitors was made in the optimistic atmosphere of 2012. However, when and where we see artwork changes their meaning. High Museum curator Michael Rooks brings us this work exactly when we need it most, after a year of sheltering in place. In this moment defined by the pandemic, The Visitors has an even greater level of poignancy for those who’ve been separated from families and friends — like the musicians in their individual rooms. This time of isolation, grief and loss is not over, but works of art like The Visitors can help us heal. It’s a work that celebrates the friendship of people who are both alone and together, like a giant Zoom that gallery-goers can walk around in, be part of and through which they can experience the warmth of human presence.