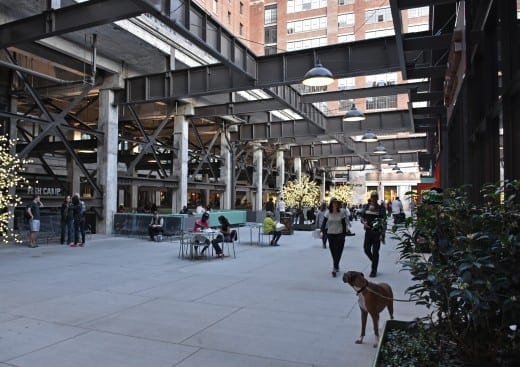 Review: A largely boffo Ponce City Market and the next new Atlanta Ponce City Market, the multi-use project housed in the former Sears, Roebuck & Company warehouse on Ponce de Leon Avenue, is one of the most discussed, written about and heralded developments in recent memory. In many ways the two-million-square-foot development, a joint venture between Atlanta-based firms Jamestown Properties and Green Street Properties, is an exemplar of Atlanta’s new focus on its urban core. Accentuated by its location on the first completed segment of the Atlanta BeltLine — Atlanta’s other much talked about major urban project — Ponce City Market promises a new way to look at Atlanta. To outsiders, it is clearly the dawning of a new day in a city long disparaged for its car-dependent culture and lack of defining character. And while the city has always had an urban culture that is perhaps a little hard to see, the project clearly represents a new direction. Jamestown, the developer of Chelsea Market in New York, is well known for its sophisticated high-end historic renovations and mixed-use developments. Ponce City Market houses the company’s primary corporate offices and serves as its flagship project. This has meant that it has focused a good deal more attention on design and tenant mix than might ordinarily be the case with a typical commercial project. (S9 ARCHITECTURE were the design architects, and Surber Barber Choate + Hertlein were the architects of record.) It is this attention to detail, reflected in every aspect of the building — materials, graphic design and landscape — that sets the project apart. High-end wood and metal surfaces, extensive design attention in signage and wall graphics and green-friendly landscape (including an extensive green roof) are some of the hallmarks of the development. The complex is essentially a state-of-the art retail, office and residential environment hosted in an historic shell, a building type that has received increasing attention as development returns to traditional city centers. The structure — built in 1926, expanded over the years and most recently occupied by City of Atlanta agencies — is not overly sanitized and mostly kept intact, hard edges and preserved peeling paint revealed.

This coy embrace of the future-past is for the most part successful, though perhaps a bit overwrought. Its “authenticity” is almost frantic in the retail areas of the building, where semi-retro graphics and broken concrete scream, “This is not a shopping mall, but an authentic urban experience.”

I found it interesting that, so far at least, none of the retail shops or restaurants has even incorporated the ubiquitous trend of digital signage in their store designs. Seemingly hand-painted menus and directional signage replace the usual changing video message boards.

The place is, by definition and design, a hipster haven. The dining options are a mix of local and national chef-driven, one-of-a-kind or rare second restaurants. The retail is mostly safe but fashionable chain stores, sometimes the first in the city.

Its residences are also singular in their seemingly infinitely varied floor plans, a result of the building’s industrial origins, and are quite expensive — another, less welcome, city trend. The building takes full advantage of its proximity to the BeltLine with a well-conceived and landscaped market entrance. An open-air shed, formerly a rail siding, is being converted into a market and public space. A bike valet arranged around a reflecting pool welcomes the BeltLine visitor. A boxcar bar will also lie in wait for BeltLine and other visitors adjacent to the Food Hall entry at the roof.

Less successful, I think, is the project’s relationship to the city at large. Though pedestrian connections and adjacent sidewalks are well-designed and not overwhelmed by cars, there is still a lot of attention given to the automobile. A great deal of land is occupied by surface parking, even though a large portion of the building’s square footage is devoted to interior parking, and a freestanding garage is under construction adjacent to the BeltLine on the eastern part of the site. The surface parking on the western part of the site was originally intended to become Phase II of the complex — likely more housing, retail or office space. This would be a considerable improvement and make a more truly urban setting for the building. Its future is uncertain and will most likely be determined by demand.

It is arguable that successful retail in Atlanta is still predicated on auto access, and reflective of the hard reality that Atlanta is not yet a particularly pedestrian city. It is also true that few bus lines and no streetcar or subway serve PCM at present. Still, I find it disappointing that such a seemly urbane project has so much parking, which will not contribute to the city’s transformation either.

What then does Ponce City Market say about the new Atlanta? It certainly exemplifies the intown renaissance and the values propelling it. Living close to transit, entertainment and shopping options is the dominant desire of both the millennial and empty nester generations. The steady sounds of new residential construction and new project announcements reinforce the conclusion that the city is now the place to be.

As I walk (or drive) though Midtown Atlanta and see its forest of cranes nestled among shiny new facades, replete with actual street presence, it seems that Atlanta is changing before our eyes. We must use this transformative energy to make Atlanta not only a more urban place, but a better designed place — and one with staying power, as well.

Will young singles drawn by the city’s cultural and entertainment offerings stay to become young families who love its unique green livability? Only time will tell. The future is unwritten, but much of it will be determined by what we do right now.