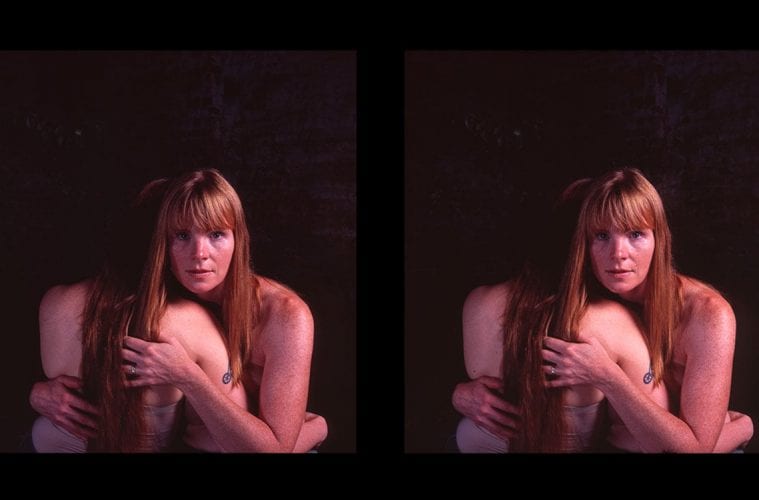 A view of the installation of Vent at the Swan Coach House Gallery.

Unlike the typical art gallery experience, at first Peter Bahouth’s Vent (at the Swan Coach House Gallery through November 2) seems as sterile and scientific as a high-tech laboratory. Clean white walls enclose small white viewing boxes that have been carefully mounted, spaced, and illuminated to avoid viewer distractions.

The view that awaits the spectator inside each sterile viewing station, however, is startlingly wondrous, even to eyes that have grown accustomed to seeing the miraculous materialized by computer-generated imagery. Vent is comprised of 16 stereoscope viewers, six containing 3-D portraits and 10 with chimerical landscapes. The stereoscope delighted Queen Victoria when shown at the Crystal Palace Exhibition in 1851, and was heralded in 1859 as an “inconceivable wonder” that surpassed modern painting by author and statesman Oliver Wendell Holmes in The Atlantic Monthly. But with the advent of film in the early 20th century, popular infatuation with this miraculous modern invention subsided until its re-emergence as the View-Master at the 1939 World’s Fair.  Described by Curator Marianne Lambert as photographic responses “to the heat and pressure felt today on a personal, political and planetary level,” Bahouth’s stereographs effectively transport the viewer back to a pre-digital era when unexpected visual discoveries could still elicit wonder. Kourtney  and Fahamu wait to meet viewers inside their stereoscopes flanking the entrance to the Gallery.  Kourtney, a young girl of color dressed in a loose orange shirt and brightly patterned blue shorts with large plastic toy rings on his fingers, sits casually in a small grass- and a weed-filled lot to the side of an old wooden shed with two mixing bowls before him. He mixes a mud-red substance with his hands in the closer, bright green bowl, while gazing intently at the viewer. Resting on a small wooden table behind him to the left is a cigar box with dried flowers on top — maybe the next ingredients for his mud-red mixture? Fahamu presents well-known Atlanta-based painter and multimedia artist Fahamu Pecou, similarly centered in the image. Fahamu is seated casually (but on a chair) in a corner of his studio holding an open book with material resembling gold leaf piled in its center. Behind him is a small wooden table with cans of paint brushes and other materials stacked in the corner. Fahamu also gazes intently at the viewer, but whereas Kourtney’s slightly furrowed brow and neutral mouth convey an almost stolid expression, a discernible twinkle in Fahamu’s eyes and his very slight smile suggest that he knows something more . . . or at least, the intimacy felt by the viewer peering into the stereoscope at each sitter makes the viewer want to learn more.

Like Kourtney, the subject of Nikki (an Atlanta-based sculptor) sits with her knees up and stares at the viewer with a furrowed brow, but she emerges from a dark background that highlights and accentuates her form. Her eyes seem exceptionally deep and moist. Here, the stereography format’s unique ability to accentuate corporeal aspects of its human subjects while intensifying the intimacy of the viewing experience shines. Nude Twins features twin young women with long straight hair, bare arms, shoulders and backs tightly embracing, with only the face of one twin and the back of the other visible.  The closeness of their skin and the directness of the one woman’s gaze makes the spectator feel like a voyeur, almost an intruder in this intimate familial scene. The twin facing the camera is Good Food Truck artist Jessamine Starr. None of Bahouth’s artist subjects are identified as such in the titles, though Fahamu is shown in the midst of his practice whereas the females are shown simply as intriguing female subjects. David is an older man with a light gray beard and an arc of silver staples in his mostly bald head. His large eyes gleam as he looks upward to right, clasping a gold pendant and wearing what looks like a keffiyeh (an Arab men’s checkered scarf) around his neck. While the keffiyeh worn this way can signify sympathy for Palestine, the deep bluish-gray cloud that surrounds David and his intensely devout expression also impart a mystical or spiritual aura to the image.

Shana departs from the revealing intimacy of the other portraits. Unlike the previous sitters, Shana’s person is hidden behind black lace gloves and a lace-like shawl covering her face. She has apparently disguised herself with branch-like antlers projecting from each side of her head, and decorated with feathers, pendants, and even perched on by an artificial white dove. Despite her attempted concealment, however, one dark eye shines through its cover, and the apparent closeness the viewer feels to her elaborate presentation within a small, domestic space effects the same intimacy as the rest. Bahouth’s landscape stereographs are seen in two rows of five stereoscopes each, on either side of a hanging rectangular light in the center of the main gallery space, and collectively titled Field Test. As the visitor peers into one stereoscope after another, magical scenes appear with brightly colored smoke billowing from seemingly familiar wooded and vine-covered natural vistas. Unlike the portraits, each presenting a separate and distinct personality, Bahouth’s landscapes are almost like members of a family who resemble each other in multiple ways. A few of the landscape stereographs feature a muddy creek flowing through a thick forest, with bright red, yellow, or pink smoke invading the otherwise remote and peaceful spot, and in one sunlight creates a pyramid of beams shining down through the misty atmosphere and diverting the viewer’s gaze. In others, intense blue or purple smoke billows from the center of a forest overrun with vines, highlighting the rich greens of the natural foliage in contrast with the intensity of the smoke. Human habitations rarely appear, and evidence of humans is absent from fairytale wonderlands in these stereoscopic landscapes. Arranged in series and identified only as numbered variations of Field Test, the landscapes’ particulars are eclipsed as the viewer’s attention is directed toward the inexplicable smoky apparitions in each.

The initial clinical appearance of Vent belies the surprising fantasy awaiting the viewer, especially because the intimate, voyeuristic nature of viewing each stereoscope emphasizes the private and personal quality of each experience. It’s amusing to realize that despite the availability of so many technological tools that enable the visualization of previously unbelievable fantasies today, Bahouth’s use of an antique, popular form of technology transports the viewer into a believable world of real space make-believe.