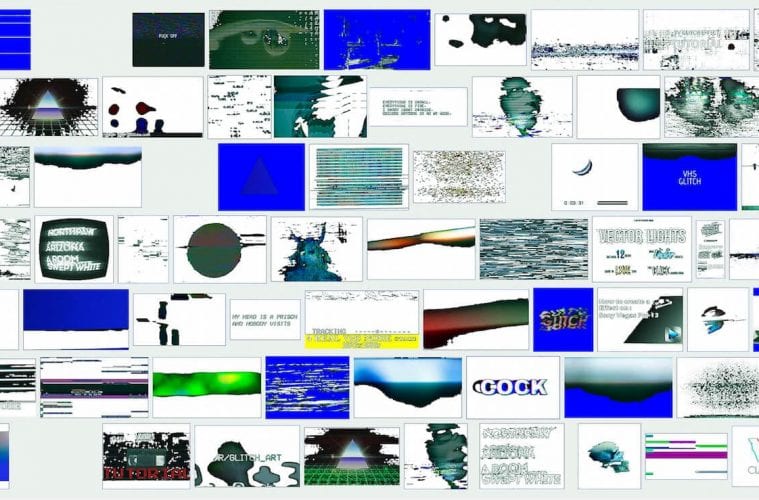 It is nothing new that the photograph is a “commodified symbol of desire that can be easily altered to control belief, experience, and communication.” And yes, it is hard to argue with the claims P. Seth Thompson makes in his artist statement concerning the power of the image in shaping ideology and our current “era where objective reasoning is overshadowed by ‘alternative facts.’” 45’s America has indeed ushered in an unprecedented era of reality-testing. But the work in Insufficient Data for an Image, Thompson’s seventh solo show, doesn’t provide a counter or even a response to these conditions of capitalism, society of the spectacle and fake news. Rather, the show feels like it capitalizes on the situation we find ourselves in using the very tools of power, Adobe Photoshop being one of them.

I am underwhelmed by this exhibition. I want the artist to push beyond the program. In 2013, I wrote on the artist’s solo show, The Last One at {Poem 88}, which similarly worked through issues of the image’s ontology — reality and the virtual — while also incorporating personal memory of experiencing a televised trauma — the Challenger explosion — which I think made that show more successful. That article brought together the scientific and philosophical contexts that I thought worked together to produce the conditions of The Last One: Pliny the Elder’s description of the painting contest between Zeuxis and Parrhasius, Plato’s Allegory of the Cave, Plato’s origin story of the cosmos in Timaeus, Byzantine iconoclasm, physicist Niels Bohr’s wave-particle duality paradox, René Descartes’ radical doubt, Edmund Husserl’s phenomenological method of bracketing, Chris Marker’s film La Jeteé, Walter Benjamin’s influential writing on cinema and fascism — “The Work of Art in the Age of Mechanical Reproduction,” Jean Baudrillard’s simulacrum, Jacques Lacan’s anamorphic stain, and even Atlanta-based artist Jill Frank’s photography series Romance, which I had also previously written about. I only provide this insufferable list (yes, I know how insufferable it is) to show that this line of thinking has been thought through and I’m not finding much else to say about this new work’s argument. 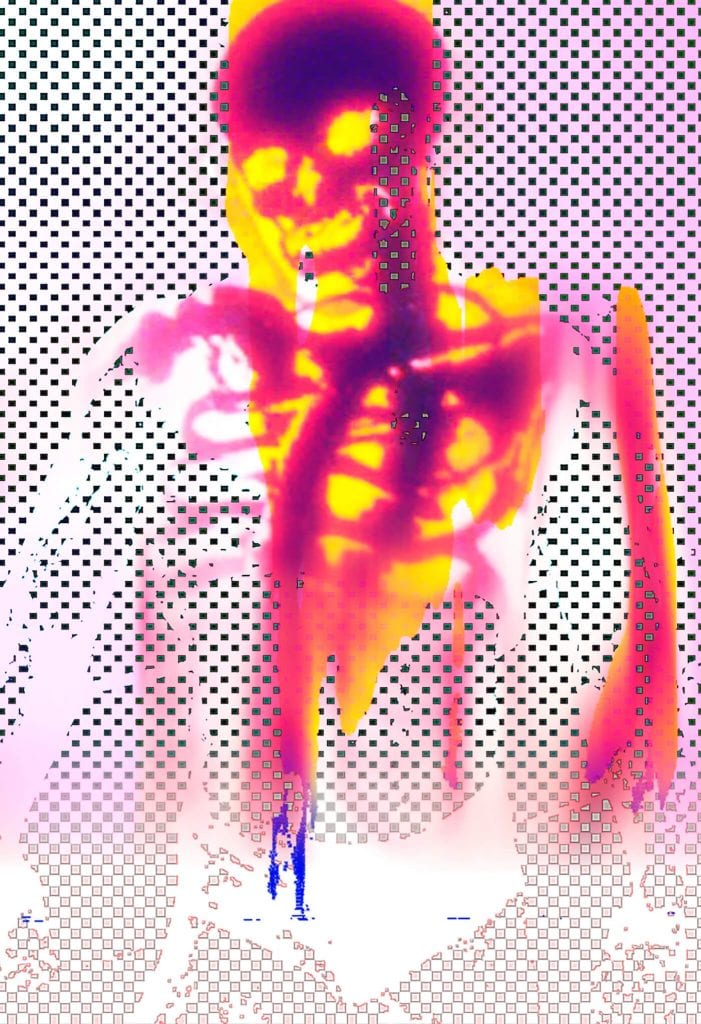 I’m not really sure what to make of the use of the word “glitch” in the 64-part, wall-sized My Head is a Prison and Nobody Visits (2016–17). There are many instances in Insufficient Data for an Image in which it seems that Thompson appropriates glitch art and the “glitch aesthetic” without understanding the landscape of the movement. Aesthetically, the work comes across as glitch art — an art practice that uses accidental and purposeful digital and analog errors and malfunctions to crack open modernist understandings of communication that rely on simplistic designations of sender, receiver, and message and the desire for an impossible “noiseless channel.” Thompson states that the show’s title, Insufficient Data for an Image, comes from November 19, 2015: “(Error code: ssl_error_bad_cert_domain)” or December 1, 2015: “Page cannot be crawled or displayed due to robots.txt.”

Another instance of unthinking appropriation is the glitch skull, present in Thompson’s Skeleton in the Closet (2016). Goth imagery has long been a staple of glitch art. Look at jonCates’ _5kU77/\/\ØU̶┼̶|̶-̶|̶g̶L̶1̶┼̶>̶|̶-̶|̶_z (2014) with obeytheprophecy, darkredsubmission, averagegoth and bruisedbrat, for example. As a matter of fact, _5kU77/\/\ØU̶┼̶|̶-̶|̶g̶L̶1̶┼̶>̶|̶-̶|̶_z is from jonCates’ ANIMATED GIF BITCRUSH APPROPRIATIONS, CINEMATIC SCREEN CAPTURES AND REMIXES, which appropriates images from popular culture. The use of pornography is nothing new either in glitch. Thompson’s Size Matters (2017) should take notes from the blog d1Ɍ+y̶ ̶N̶3WWW_M3DI∆ that jonCates, Shawné Michaelain Holloway and Domenico Dom Barra run together.

The outlier in Insufficient Data for an Image, the cruciform Bruce Almighty (2016–17), is the most successful in the show. Though the title evokes the 2003 movie of the same title starring Jim Carrey in which Carrey is given powers by God – played by Morgan Freeman – after he complains too much, comprising the cross are appropriated snapshots of tourists posing with the shark from Jaws, nicknamed Bruce by his hunters, at Universal Studios in Florida. Looking at these images of smiling tourists putting their head into the open mouth of this animatronic, hanging upside-down shark feels strange. This work feels unresolved and open in a way that I find refreshing compared to everything else in Insufficient Data for an Image. I would like to see more of this.

I have a feeling that this show can only work here in Atlanta. I’m not trying to say that it isn’t OK to make something that isn’t new — postmodernism made sure of that. It’s just that manipulating these images using the “master’s tools” doesn’t really contribute to the conversation. Maybe I’m a purist, but these “glitch” images are not glitch. Even though it can be argued that glitch art doesn’t need to happen just by chance or through breaking or subverting channels of transmission, these images feel manufactured in a way that cheapens the ethos of glitch and its ability to deconstruct and break meaning, providing space for us to get away from the established action scripts.

P. Seth Thompson’s Insufficient Data for an Image is on view at Sandler Hudson Gallery until May 6, 2017.