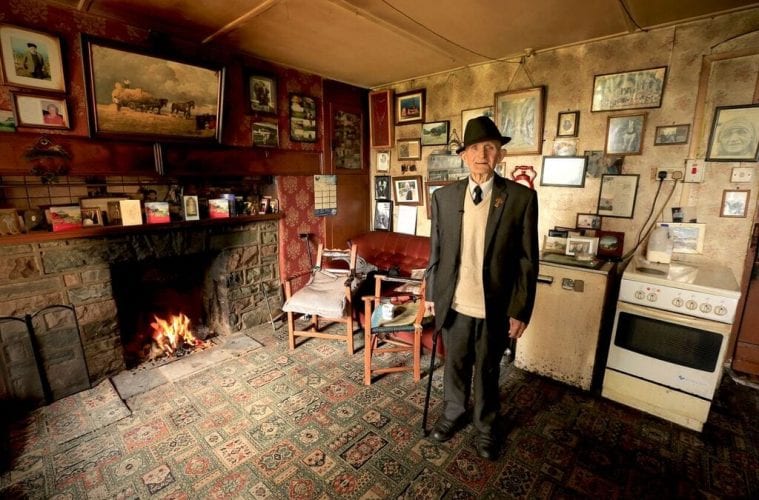 Review: “Older Than Ireland” captures the wit and the wisdom of a life lived long

They’re all at least 100 years old, so they’ve seen a lot of life. Still, the dozens of Hibernian men and women interviewed in the lovely documentary Older Than Ireland don’t pretend that living long has made them especially wise. Nor do the historical milestones they’ve seen — the invention of computers, airplanes, unmarried cohabitation — necessarily knock them out, for better or worse.

Yes, the advent of washing machines was a blessing. As for indoor electricity? Well, one woman complains, now visitors can see every speck of dirt that was previously obscured by candlelight. (Note to anyone who has puzzled their way through thickly accented films from the UK and Ireland: the film is subtitled.)

Director Alex Fegan captures a group of subjects varied widely in their levels of agility and independence. The oldest man in the country is bedridden, but he still has his mind. Another, who practiced as a veterinarian until age 98, is preparing to renew his driver’s license; he claims that the decades he’s spent behind the wheel make him one of the safer citizens on the road.

Shared experiences loosely but neatly arrange the movie among those interviewed. They recall first childhood memories and seeing flames in Dublin during the Easter Uprising of 1916. One fellow, Jackie, shown vigorously building a peat fire on his hearth, is one of the few people still living who met Irish leaders Michael Collins and Éamon de Valera.

But this isn’t a history lesson. It’s more an impressionistic mosaic — or if you will, a group portrait of longevity on one particular patch of soil. People remember impoverished childhoods and the “American wakes” that preceded the emigration of so many friends and family members who moved to the States in the early 20th century. They recall first kisses, the first shivers of sex, the joys and travails of starting families, and the shock of losing children and spouses as they lived on. “When she died, I died,” one fellow says of his wife, and he quietly repeats the sentence. Others have moved on more easily. “I can honestly say that I don’t miss him,” one woman says of her husband — mainly because he was frail and she worried about him so much.

As the movie follows its subjects around from beauty salons to markets, it finds moments of quiet humor. When two old ladies meet in a grocery aisle, their conversation is equally delicate and frank. The elder admits she’s just recovering from a two-week bout of diarrhea and vomiting. After listing her problems unapologetically and graphically, she demurs: “I’m not 100 percent.”

Director Fegan treats his venerable subjects with care. If he doesn’t seem to push them hard (we never hear him guiding the questioning), he clearly finds a place of rapport with them. And the images he captures are appealingly crisp, ranging from antiseptic nursing facilities to candle-cluttered parlors heaped with Catholic iconography.

Considering the religious nature of Ireland, historically, the spiritual view here is interestingly mixed even for the many folks here who were regular churchgoers. Old as they are, they still wrestle with questions of death, God and the afterlife. “If Christ died for all the sins in the world,” one of them argues, “why would he send you to hell?”

Even a nun, asked about the meaning of life as she nears the end of her own, sighs: “That’s a tough one.”

No one pretends to know a whole lot more than they did when they were toddlers, admiring their first pairs of shoes. That’s both a little encouraging, and a little disappointing. The message is, we’re all on the same voyage. Whether our passage is long or very short, we’re in it all together, and it’s a bit of a lovely muddle and mystery for us all.

Older Than Ireland. A documentary directed by Alex Fegan. In English (with subtitles). Unrated. 81 minutes. At Landmark Midtown Art Cinema.