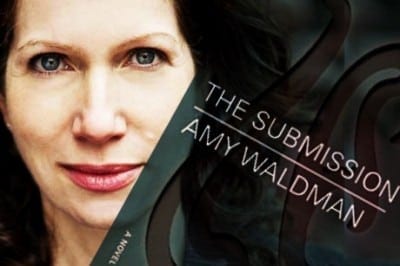 It’s telling how little the jury knows. Not a single one of the artists, critics or historians assembled to judge a contest for a memorial to victims of the World Trade Center attack recognizes the Islamic aesthetic of the winning design they select from 5,000 anonymous entries. It is an absence of cultural knowledge that ends in public fury when the winner is revealed to be a Muslim American architect named Mohammed Khan. It also symbolizes America’s problem with much of the world: its supreme ignorance of non-Western cultures.

Amy Waldman’s sharp, incisive novel about post- 9/11 politics, “The Submission,” probes the complexities of the situation with resounding intelligence. It also indulges in occasional caricature, such as when, during the jury’s deliberations over the “Garden” and a competing design called the “Void,” a couple of art experts snippily dismiss gardens as the vanity of upper-class Europeans. Even haughty New York art critics aren’t worldly enough, it seems, to see that the proposal for a walled garden carved into quadrants by intersecting water channels bears the indelible design principles of Persian gardens going back a millennium.

It’s like failing to recognize a Gothic arch as medieval or an amphitheater as Roman. The concept of the paradise garden is that fundamental to Islamic art, repeating in carpets and inlay work, glorified in architectural masterpieces like the Taj Mahal and the Alhambra. And one would expect the jury to be vetting the proposals for their symbolism, not to be naïve about visual cues. Though Waldman continually pokes at the members’ hypocrisies and egotism as the controversy over Khan’s selection unfolds, she seems to take this basic lapse in their knowledge for granted, as if even highly educated Americans can’t be faulted for their lack of cultural awareness.

Waldman, who will speak at the Book Festival of the Marcus Jewish Community Center of Atlanta on Monday, November 7, sets her book just two years after the attack, when feelings are still raw and wounds fresh. Her taut, kaleidoscopic narrative constantly shifts focus among half a dozen major characters, building considerable suspense into a single question that pulls us along: should Mohammed Khan be allowed to build the Garden memorial or not?

At the novel’s center is Claire Burwell, a figure of blond privilege. The widow of a wealthy businessman and the sole representative of the victims’ families on the jury, she is instrumental in swaying the vote in favor of the Garden, cherishing it as a reflection of her husband’s sunny temperament. Even after the architect’s Muslim identity is disclosed, she persists in her support of him, until her liberal principles give way to a growing hysteria about Khan’s intentions. Mohammed Khan, nicknamed Mo, recalcitrant, proud and contrary, is the novel’s darker center, an artist who refuses to speak up for himself when the public demands to know if he has actually designed a garden for martyrs — for the terrorists. Around these two principals are an array of figures who become embroiled in the brouhaha over Khan’s selection, from a rabidly aggressive New York Post reporter and the black-sheep brother of a firefighter lost in the attack to the jury chairman, the retired head of an investment bank anxious for a new position of public prominence.

Waldman, a former New York Times journalist who reported on the aftermath of 9/11 and was the paper’s South Asian bureau chief in India, brings an insider’s knowledge to her fictional territory and Muslim characters’ backgrounds. (Khan, for instance, is the American-born son of Indian immigrants.) With a talent for the swift scene, she deftly puts into play the accelerating dynamics of a firestorm: the media fanning the flames of bigotry; anti-Muslim and pro-Muslim organizations each pushing their agendas under demagogic leaders; grieving families asserting their moral authority; and New York’s female mayor trying to figure out which way public opinion is blowing. Almost every one of Waldman’s characters has innate political instincts — perhaps the hallmark of a journalist’s creations — conscious of how much or little power he wields, and who he must align with to have his voice heard above the fray, for or against Khan.

Khan himself poses a conundrum for which Waldman has no answer. In him the author has created a character whose complicated identity seems to exceed her grasp. He is described as thoroughly secular, a Muslim in name only, the son of immigrant Indian parents who had “made modernity their religion.” Raised in Virginia, Mo eats pork, sleeps around, has a white American best friend, is devoted to modern architecture, and doesn’t pray or even know much about his religion. A neutered Muslim such as Mo, Waldman seems to propose, is the only kind an American jury would consider supporting for the 9/11 memorial. His neutering is apparently also intended to make a simple, absurd point: not all Muslims are religious fanatics. Mo Khan is just a regular secular American, Waldman attempts to persuade us, as if secular is the very definition of American.

So why does this secular practitioner of modernism, this barely Muslim Muslim, reach back into his Islamic heritage for a design commemorating the victims of jihadists? Why not a structure whose lineage can be traced back only to some modernist influence? Why a Persian garden fused with modern elements like steel trees?

There is an interesting passage where Khan tries to explain himself, at a public meeting, to an angry crowd essentially demanding his head. First he dissembles about the universal appeal of gardens; ultimately, he finds he can’t explain himself and gets up and walks out. Later he fails to adequately explain his beliefs about his design to Claire Burwell, and she walks out on him. With both these abrupt departures, Waldman seems to say she doesn’t have the key to her protagonist either. The modern Muslim man? She can describe what makes him modern, but not the inner compulsions and needs that make him Muslim, that connect him back to his family’s culture.

The core of Waldman’s narrative is moral and intellectual. Built into the central question of whether Mo Khan should be allowed to build the Ground Zero memorial are a hundred other questions, difficult to answer but interesting to ponder. Would it be fair to disqualify Khan from the contest as unsuitable on the basis of his religion? Is it OK to circumvent a democratic selection process if the general public is furious with the result? Should the family members of victims hold sway over who designs their loved ones’ memorial? Should Khan offer a gesture of atonement for the sins of his fellow Muslims? Do grieving Americans have a right to discriminate against a memorial design rooted in Islam? What do you do if people’s emotions run counter to the ethical principles on which America is built? What about tolerance? Fair play? The recognition of work based purely on merit, not background? Do principles count as much as powerful emotions — rage, pain — in the wake of a national tragedy?

Waldman’s unyielding Khan seems to be a vessel for her own contradictory feelings toward Muslims. But “The Submission” forces us to think about American values in a very real way. Not as platitudes sliding out of a politician’s mouth, but as demanding standards and morals that are hard to uphold when put to a grueling test.

A roster of acclaimed writers, award-winning journalists and celebrities (Regis Philbin, Dyan Cannon) — the festival’s signature mixture of highbrow and kitsch  — will be in town for readings and discussions from November 5 through 20. My recommendations for the festival’s top events:

Sunday, November 6, 4 p.m. LUCETTE LAGNADO: “The Arrogant Years: One Girl’s Search for Her Lost Youth, from Cairo to Brooklyn,” a portrait of a Jewish family flourishing in Egypt, then forced to improvise a new life in America.

Monday, November 7, noon. AMY WALDMAN: “The Submission,” and MARY GLICKMAN, “Home in the Morning,” a portrait of a Jewish boy from Mississippi who struggles to find love during the early years of the civil rights movement.

Thursday, November 17, 10:30 a.m. MELISSA FAY GREENE: “No Biking in the House Without a Helmet,” about the funny stuff that happens when you have four children and adopt five more from distant lands. (See my review here.)

Thursday, November 17, noon. ALICE HOFFMANN: “The Dovekeepers,” an ambitious, heavily researched novel about four women’s lives in the world of Judaism 2,000 years ago.