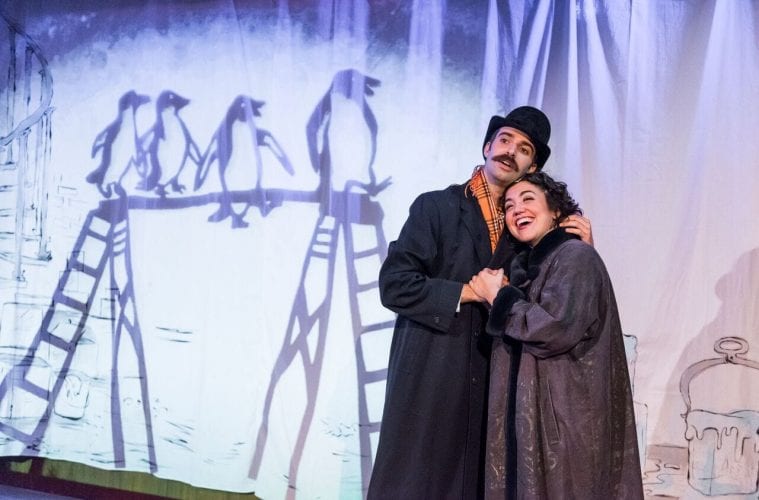 The town of Stillwater is about as pleasant and ordinary as a place can be. It’s the source of both satisfaction and more than a little wanderlust for Mr. Popper, the hero of Richard and Florence Atwater’s classic 1938 children’s novel, Mr. Popper’s Penguins, now a charming musical currently in production at Synchronicity Theatre through January 1.

There’s a lightness of touch to the Atwaters’ classic tale — a delicately irreverent tone that’s never overtly facetious or cynical — and it’s often replicated in the musical. Mr. Popper paints houses in the ordinary town of Stillwater by day and raises a family of four at his home, but he dreams of something beyond it all: exploration and adventure.

He begins a written correspondence with an Antarctic explorer, and he’s surprised when he not only gets a shout-out from the explorer during a radio broadcast one evening, but also a mysterious package in the mail a few days later. He and his family fall in love with the penguin that’s been sent to them, and they begin to adapt their habits to suit their new pet’s needs. When the penguin gets sick and lonely, they adopt a female companion from a local aquarium and soon they have a penguin family on their hands.

Lead actor Brandon Partrick does a nice job of capturing Mr. Popper’s fond regard for his work and family life, balanced with his buried longing for something more. Other roles — Mr. Popper’s family, the townspeople and so on — are played by a small cast of actors who each appear as many different characters.

The songs, created in 2010 by Brett Schrier, are pleasant enough, though there are too many slow-tempo love songs and “I wish” songs, especially for a kids’ show; the tone often becomes goopy and the pace slow. Singers are miked even though the space is small, and the audio mix doesn’t always sound as pleasant or as immediate as live music should. Things improve on up-tempo numbers, as when the full cast sings and taps out the officious bureaucracy of City Hall when Mr. Popper tries to get a permit for his new pets. The whole show becomes more lively and colorful in Act 2 when the plot takes an unexpected turn as the Popper family and the penguins become traveling performers on the vaudeville circuit.

Designer Ryan Bradburn’s clever and adaptable set nicely mirrors the look and feel of the book, but I wasn’t as crazy about the design of the penguin puppets, which lacked personality and looked too fuzzy to convey a compelling sense of “penguin-ness.” I’m accustomed to seeing live puppeteers on stage, but somehow in this show, I could never quite suspend disbelief and lose sight of the actors operating the penguins. I caught myself wondering why there were so many people in the Poppers’ household. The effect of the penguins is rarely delightful, which it needs to be in order for the story to be a home run.

Although the show is imperfect, it’s still a winningly gentle and enjoyable tale. As other stages in town are given over to saccharine Christmas stories and the screens fill with Santas and pricey gifts, it’s nice to know you can stll take the kiddos on an adventure to a very different pole, one on the opposite side of the earth from the overly familiar Northern one.