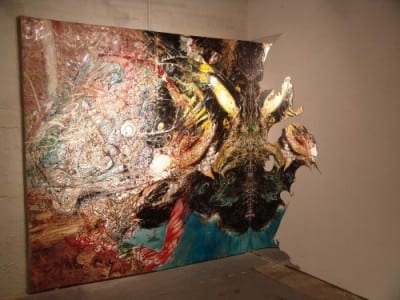 Review: Maurice Clifford challenges conventions of reality and illusion in “Beyond Words”

Maurice Clifford‘s paintings are explosions of energetic forms. The works in “Beyond Words,” on view through May 25 at Tula Art Center, continue the mode he adopted as a result of a revelatory experience he had in 1970. This visionary encounter led to a style of painting that is a peeling back of reality, exposing not a hidden-behind “ultimate” truth, but only the fact that the visible, material world is not the whole of what exists right in front of our eyes: reality is only what a person chooses to see. If the paintings are disorienting at first sight, it’s because first sight (one’s normal way of looking) is flawed. 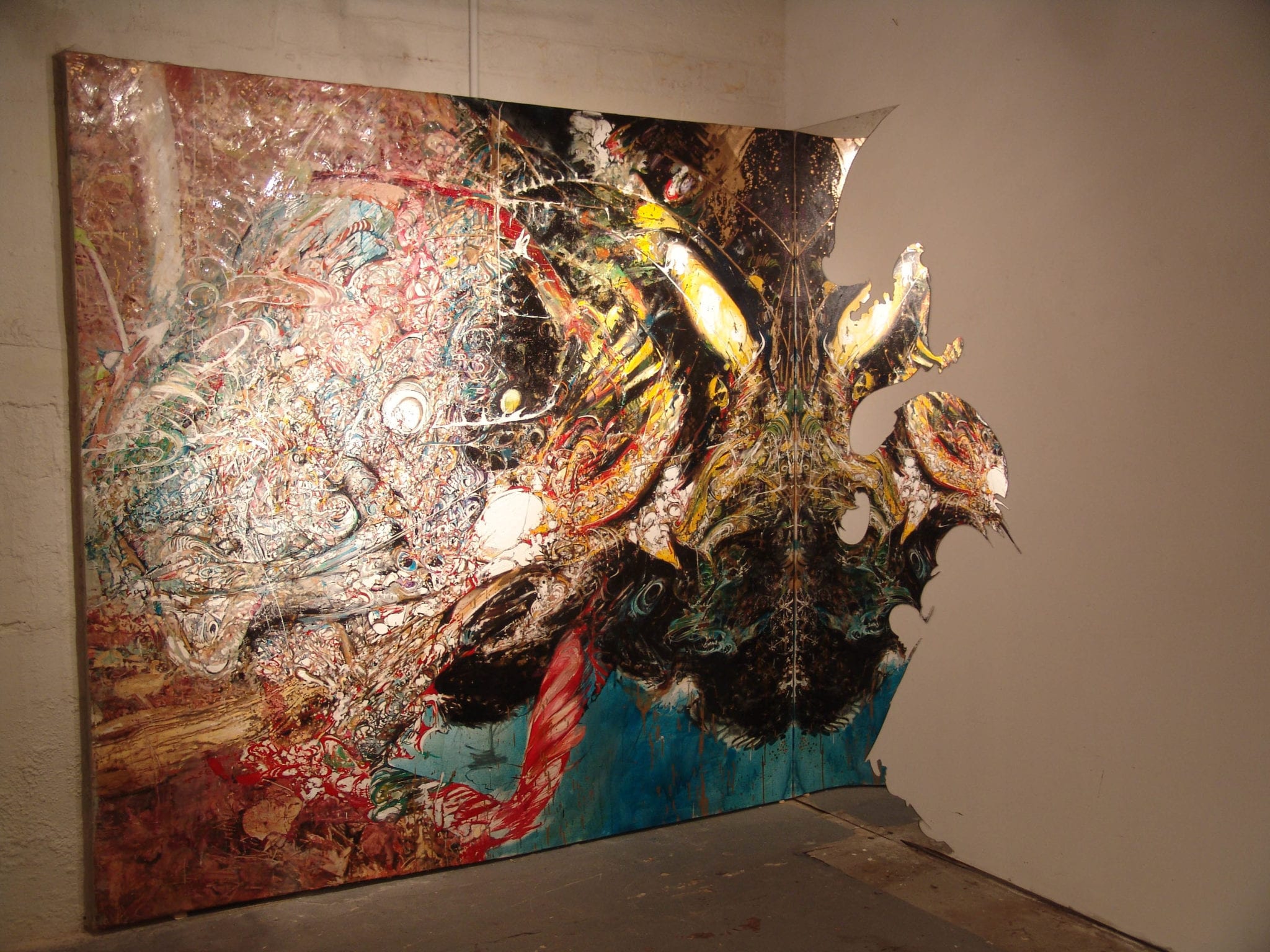 The peeled-back reality is hidden not by an obstructing layer, but rather by the act of seeing. Many of Clifford’s paintings explore peripheral vision. The eye is designed to work in a single (straight ahead) direction, but focus in one direction doesn’t mean there aren’t things to see in others. In the same vein, the longtime Atlanta artist is fascinated with spherical mirrors, seeing them as representations of consciousness: they reflect everything, and their being in the world is made up entirely of those reflections.

“Okefenokee,” a dynamic canvas with green and complex reflections in water, appears representational at its center. At its edges, subtle abstraction takes over like out-of-control, mutant kudzu, bending a prosaic scene of forest and water. Standing close to the painting, one sees the middle clearly, with the edges bending and blending around peripheral sight, an experience that mirrors consciousness. Attention can be focused, but consideration of one’s mind shows myriad wobbling and wiggling thoughts, pushing at the edges of perception, which are equally (or more?) significant to the quality of one’s mind than the intended focus.

Attention to the periphery finds another expression in the paintings’ often ambiguous edges. Clifford doesn’t believe a painting ends at the end of the canvas: his painting is revealed, rather than created, and “holographic'” in that any part of it contains a whole. He also employs mirrors to illustrate continuity: the edge of a painting meeting a mirror at a right angle constructs an encompassing space. As one moves, the contents of the image change: at a certain angle, the painting-plus-mirror ceases to enclose anything, instead opening out like his mirrored orbs to indicate everything/continuity. 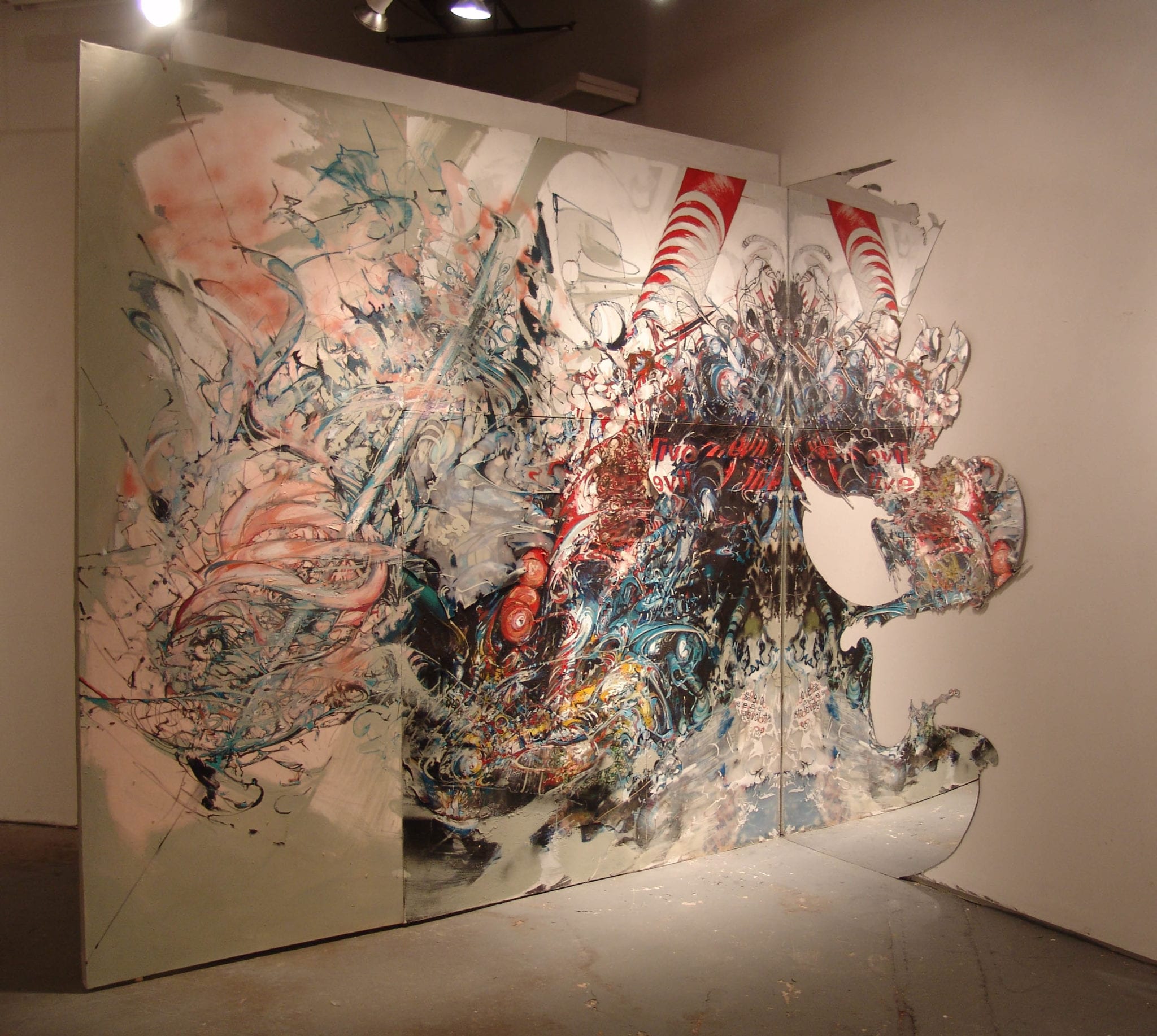 These considerations bring to mind both Buddhist and Freudian psychology. Clifford’s visionary experience — the source of his complex, unfolding, revealing technique — led immediately to a painting he describes as a mandala. This term, as with others from Buddhist art, has entered common usage and often refers in contemporary art to any circular, bi-axially symmetrical image. In Buddhism, mandalas are cosmic maps and tools for meditation. Practitioners make use of mandalas to achieve states of consciousness, with the goal of revealing the illusion in the real (and vice versa).

Clifford’s seminal painting was similarly motivated: having seen inwardly a particular form everywhere present in material reality — variously described as a worm, a tube, a strand — he attempted to describe it in paint, and he has ever since. As he said, “Each time I try to figure it out anew.”

Several of the paintings on view incorporate scenes from New York’s Ground Zero. Destroyed buildings, huge pits in the ground, debris — all relate naturally to Clifford’s conceptual and iconographic approaches. He employs the events of September 9, 2011, as another instance of reality not being what it seems.

Coincidentally, Xie Caomin, whose exhibition “Samsara” is at the nearby Museum of Contemporary Art of Georgia, calls his paintings mandalas, and they too use visual elements from 9/11 to construct circular forms. Samsara, a Sanskrit term, describes the insubstantial, illusory or deceptive nature of reality. In his artist statement, Xie Caomin says that his “Mandala of Ruins” embodies the Buddhist concept of samsara/metempsychosis, which is the circle of creation, establishment, destruction and emptiness, and its relation to 9/11.

The six canvases in “Samsara” are exact replicas in composition, with differing color schemes. Xie Caomin’s mandalas are not spiritual tools; instead they are appropriations of an iconography. Their relationship to samsara and 9/11 would not be evident if one did not read the statement. 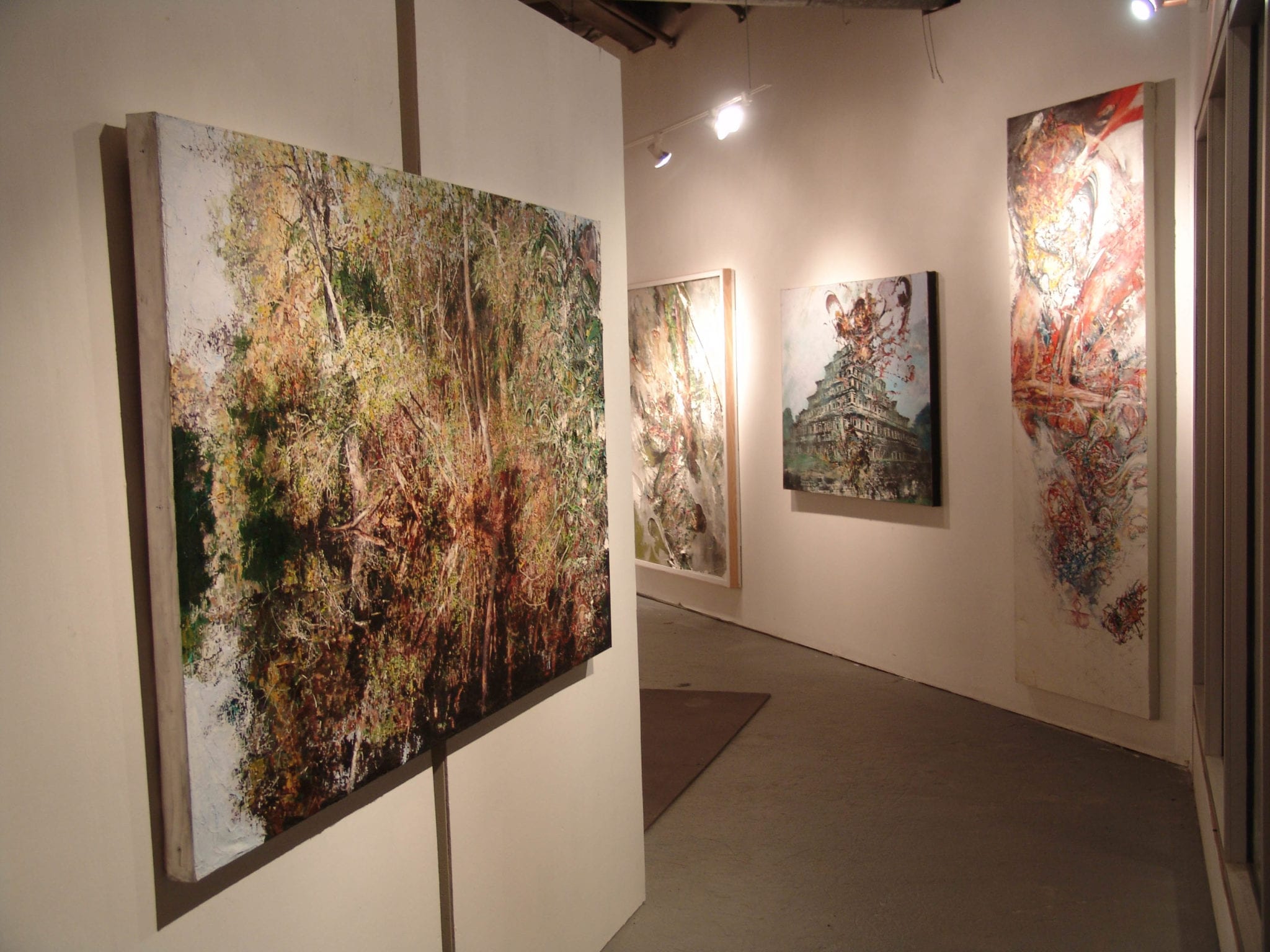 In contrast, Clifford’s work proceeds directly from an overpowering personal experience (which one can call spiritual), and, without knowing anything about his background, I immediately sensed in his paintings a psychical struggle concerning vision, the awareness of multiplicities in individual objects and instants, and a series of questions about reality.

Clifford has also worked in performance. These pieces include long repetitions, rotations and circumambulations, such as being rotated around three axes while strapped into a lawn chair and walking around a pole for 12 hours. One thinks of the Sufis whirling or of the grueling prostrations of Buddhist monks and other religious seekers.

The artist, who finds these practices elating, says he sees these performances as a tool “to not be your normal self.” His paintings have the same end: to present mind and vision with familiar visual reality in such a way that opens questions about the casual idea of reality.