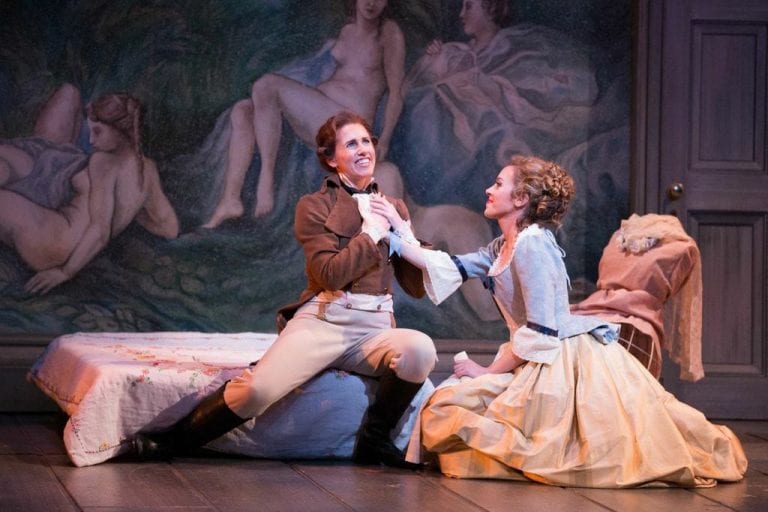 Young singers rise to the occasion in "The Marriage of Figaro." (Photos by Jeff Roffman)

Review: Lively “Marriage of Figaro” is the Atlanta Opera’s best outing of the season

On paper, it didn’t look very promising. Only a couple of the cast members for the Atlanta Opera’s The Marriage of Figaro showed up with significant resumes. A few have sung with major companies, but almost always in minor roles or as covers, who are sometimes given a performance or two in a major role at the end of an opera’s run.

Most are young singers in the early stages of their careers. The Marriage of Figaro — which will be performed Tuesday at 7:30 p.m., April 10 at 8 p.m., and April 12 at 3 p.m. at the Cobb Energy Performing Arts Centre — uses sets and costumes rented from Canada’s Banff Centre, whose small opera program functions as a training program for young singers. [Translation: “not much money.”] At dinner before Saturday’s performance, I actually warned my friends not to expect too much.

Boy, was I wrong. Perhaps it was an Easter/Passover miracle. To a large extent, Mozart’s brilliant, poignant “upstairs-downstairs” comedy is one that thrives on young voices if they are carefully cast. And this was an example of casting taken to a level of brilliance. With a modest budget and profile, the Atlanta Opera must rely mostly on young singers, and the problem with this is finding the ones who are ready for the roles. Someone at the company really does know who’s out there.

There are, however, a couple of roles in Figaro that call for major voices. Of these, by far the most important is Countess Almaviva. Mozart loved his sopranos — he even married one — and for them he wrote some of the most exquisite arias in existence. In Figaro, the Countess, at the ripe age of 19, sings longingly of her lost youth and pines desperately to recover the affections of her philandering husband.

Her two major arias, “Porgi amor” and, especially, “Dove sono,” are the bittersweet high points of the opera. This has been a signature role for such legends as the immortal Elizabeth Schwarzkopf and, in my day, Kiri Te Kanawa. It demands a large, expressive voice with a certain dignity and maturity. Amazingly, we got all those qualities in Katie Van Kooten.

She has the ability to control her vibrato as if with a rheostat, dialing it up when she wants a certain emotion. And rarely will you hear more elegant phrasing. She can be a bit wooden, like an old-fashioned singer, but in this role she was simply regal, acting with her sumptuously beautiful voice and her expressive face.

As Count Almaviva, John Moore was the big disappointment of the evening. His voice is dry, almost without color or rich tone, and intonation was simply lost. Even his recitative was badly off pitch. The Count needs to dominate the stage with his commanding voice and physical acting. Instead, we got bluster.

Lauren Snouffer was delightful in the soubrette role of Susannah, the Countess’s maid and the fiancé of Figaro, principal servant of the Count. Upon hearing her in 2011 in a minor role at the Glimmerglass Festival in upstate New York, I found room to comment on her because she was such a standout. Here, her light, flexible soprano was perfect for Susannah, and she is a born actress, bringing just the right saucy balance to her character.

Our Figaro, baritone Craig Colclough, took a bit of time to warm up. But he then revealed a nice-sized voice with fine coloring and excellent intonation. In the pants role of Cherbino, we got Naomi O’Connell, whose dark-hued mezzo voice had just the right youthful quality (she’s playing a 12- or 13-year-old boy). Her energetic portrayal mixed comedy with sympathy and conveyed the innate awkwardness of adolescence.

The scenery-chewing performance of Victoria Livengood as Marcellina was unforgettable. The role is a stock comic character — an older, unattractive woman, in this case scheming to marry Figaro. But Livengood, probably the most experienced singer in the cast, invests the role with such charisma and comic abandon that it becomes more integral to the opera than in any Figaro I’ve ever seen or can even imagine. The voice is huge, and she has the ability to produce a frightening array of comic embellishments, often approaching a sort of bellowing. Her body language, facial gestures and movement on stage are priceless. Her’s is a rare gift.

Bass-baritone Bruno Praticò, another veteran performer, gave a finely honed performance in the comic role of Dr. Bartolo, and the balance of the cast was similarly competent.

The whole was clearly more than just the sum of these parts. Figaro is the ultimate ensemble opera, and the dazzling procession of quartets, octets and every possible combination flowed across the room with nice precision and balance.

Not surprisingly in this city of choruses (thank you, Robert Shaw), the chorus is this company’s strongest asset, and here they were again superb. Like the cast, they were put through unusually demanding movements in this production, which stage director Tara Faircloth choreographed as if it were a ballet. From time to time she got a bit carried away and the constant motion became distracting. Mostly, though, it added a level of energy that worked well.

The Atlanta Opera orchestra isn’t God’s own orchestra. Any fair assessment must start with that acknowledgement. Still, under the tutelage of music director Arthur Fagen, it has improved substantially since the bad old days. It seems to respond better to him than to other conductors, at least the ones who’ve been invited down in the last few years.

On this night, there were the usual errors and a lack of precision, tightness and tone — the qualities that define a great orchestra — but things went reasonably well. Fagen can be maddeningly lethargic at the times when he shouldn’t, and such was the case here. This sucks the energy out of Mozart, at the same time leaving the orchestra more exposed than if he’d taken a faster clip. I found myself wishing I could send him a pot of espresso at intermission.

Figaro is set in a palatial estate, and stage directors love to create lavish sets for it. Susan Benson’s sets were the opposite: some painted backdrops and modest props. If it looked a bit frugal, like a school play, it was at least functional and never got in the way of the singing, clearly front and center on this night.

Figaro’s brilliant librettist, Lorenzo da Ponte, wrote in his preface: “The opera will not be one of the shortest that has been performed on our stages.” This prophecy still holds, and the Atlanta Opera’s performance clocked in at three hours and fifteen minutes even with two of the three intermissions eliminated. In this case, “more is more,” and the sheer pleasure of hearing this score sung so elegantly is such that you want it to go on all night.