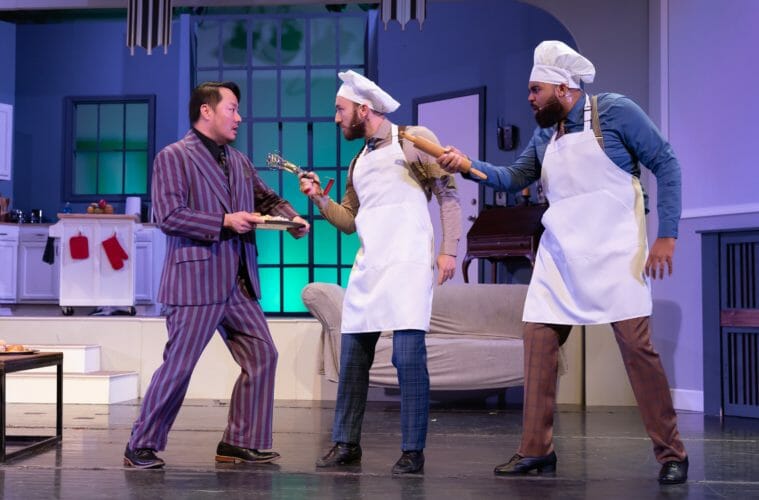 “I hate theatre. Well, it’s so disappointing, isn’t it?” begins the parody musical The Drowsy Chaperone. It’s written in a dry, tongue-in-cheek way, of course, but after sitting through Atlanta Lyric Theatre’s take on the Tony Award-winning work, you may be mulling the sentiment sincerely.

Running through September 5 at the Jennie T. Anderson Theatre, Chaperone is the first production that the Marietta-based theater has staged in 18 months due to the pandemic. Sadly, the return lands clunkily while also prompting safety concerns for anyone who’s even remotely aware of the current surge in Covid cases.

The play-within-a-play begins with a narrator, called only Man in Chair, sitting at home alone grappling with a “non-specific sadness,” who decides to cheer himself with a re-listen to a beloved old recording of the (made-up) 1928 musical comedy The Drowsy Chaperone. As he spins the vinyl, the musical, setting and characters spring to life all around his drab apartment. 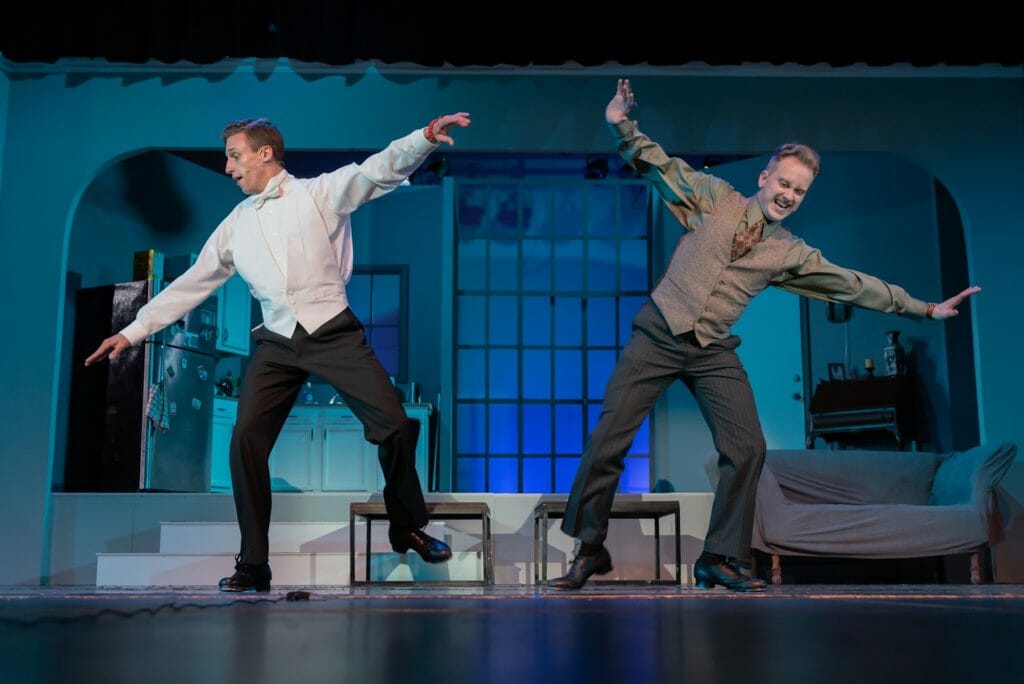 In the show’s strongest and most energizing dance number, Michael Persson and Colby Howell, as groom and best man, respectively, channel some pre-wedding jitters into the toe-tapping song “Cold Feets.”

In classic, overwrought 1920s style, the plotline of the fictional show revolves around preparations for a grand wedding — that of oil tycoon Robert Martin and Broadway star Janet Van de Graaff. The story serves mostly as a device for queueing up the next big number, and along the way we’re treated with wry nods to every classic trope in the book — improbably disguised gangsters (here posing as pastry chefs with some hot crossed puns), vaudeville-style comedy routines with spit takes, mistaken romantic identities, blindfolded roller skating, and a deus-ex-machina that literally falls from the sky.

The “drowsy” in the title is old-timey code for “constantly drunk,” as the titular character remains throughout the show, despite being charged with supervising Janet before she says, “I do.”

The fact that this staging fails to capture the intelligence and hilarity of The Drowsy Chaperone’s original vision is not the fault of the cast, most of whom are talented and clearly doing their best to capture the energy and pizzazz of the period in which this fictional show- within-a-show is set. But they’re bogged down by lackluster stage design, limp, repetitive choreography and unimaginative direction.

More often than not, the music almost completely drowns out the singing, particularly during the ensemble numbers.

The show was originally concocted in the late ‘90s as a fun, raunchy spoof among friends at a party. It progressed to the Toronto Fringe Festival, followed by a successful run in Canada and a staging in Los Angeles, finally making its victorious lap around Broadway in the early aughts. Having seen the sublime Broadway run in 2007, I know the musical can feel like a nonstop magic trick when done with purpose and creativity.

For instance, what wonder and delight when suddenly, during one of the climactic ensemble showstoppers, the record begins to “skip,” forcing the performers to keep repeating the same kicks and arm flaps over and over. But in this production, when that happens, the focus and pacing are so off, it’s blink and you might miss it.

The Drowsy Chaperone features song and dance numbers that dazzle, but the show also skates the razor’s edge, as Thornton Wilder put it, between present and past. The old-timey nostalgia serves as a glitzy foil for present-day disillusionment. The broad humor is funniest when refracted through today’s cynical lens.

For instance, we get numerous mentions of the gruesome ends various cast members met later in life, the addictions to which they succumbed. For example, a Rudolph Valentino-by-way-of-Pirelli-in-Sweeney Todd lothario named Aldolpho, the man of “a thousand accents, all of them offensive,” was found, the narrator informs us, after his untimely death, “partially consumed” by his pet poodle. 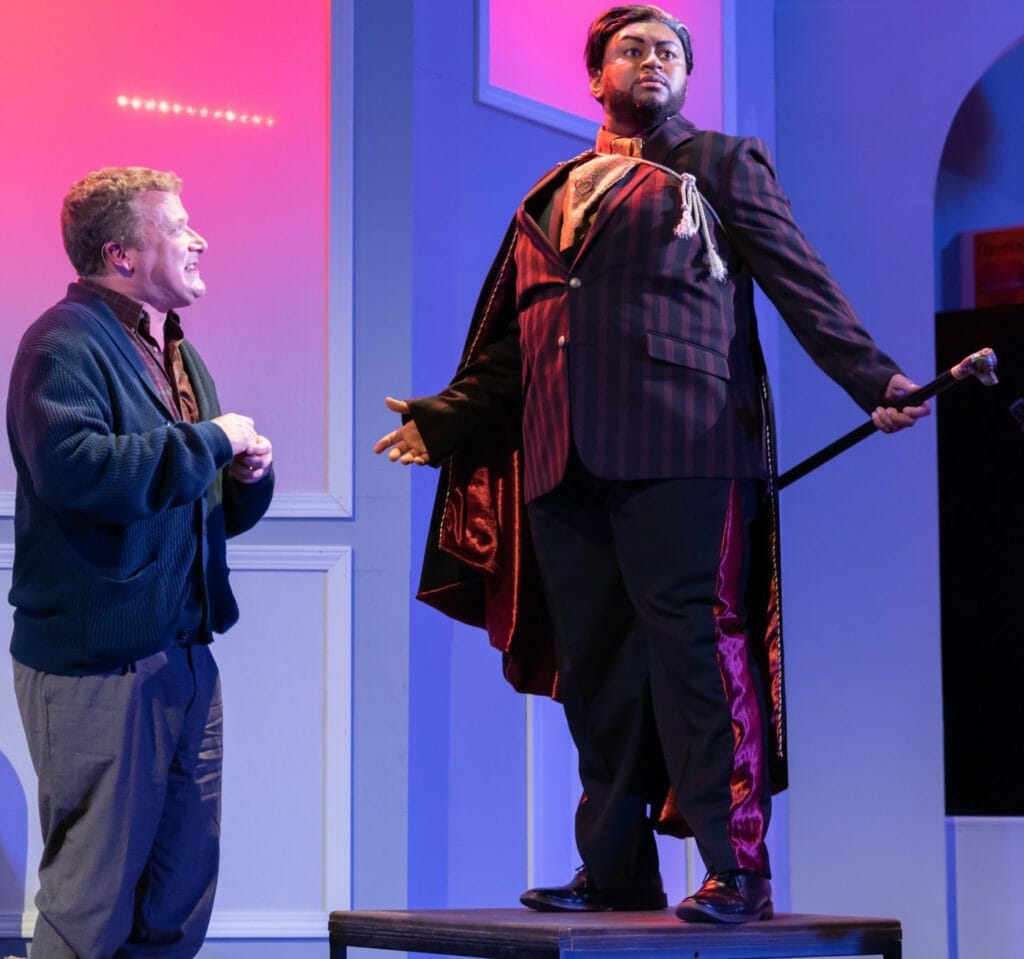 The musicals of the Roaring ‘20s always had a sinister edge – a shadow following the blazing frivolity. That is why the repeated asides that Man in Chair peppers in as he narrates along with the record about various actors’ miserable real lives, or their stints shilling a brand of toothpaste that was popular because it was “made with cocaine,” work so well when played with complete sincerity and with total commitment by the players in the ‘20s production itself.

How disappointing, then, that the Lyric production dispenses with adding these kinds of tonal layers and levels, instead deciding to play every laugh directly to the audience, beating each joke into the ground.

That lack of comedic sophistication is a shame, especially because the themes of over-the-top entertainment as an escape from the acute pain of the present, and the reexamination of how celebrities or popular art were presented in their own time, are topical now. The moment is also ripe for musical satire, exemplified by the recent run of Apple TV’s cleverly executed self-aware musical homage and parody Schmigadoon!

Finally, a note on safety and choices during this profoundly anxiety-ridden time. It’s no secret that there’s a benefit/risk comparison to every voluntary outing we make right now. Getting to see live theater again finally is a gift, yes, but only if you can maintain peace of mind about your — and your family’s — safety throughout.

Despite Cobb County’s masking mandate, it was immediately apparent upon arrival at the county-run venue that the Lyric’s enforcement of any such protocols would be nonexistent. With coughs occasionally ricocheting through the crowd, at least four people sat down in our section sans masks. No one on staff moved to ask them to don one.

The box office also had packed the rows as close together as possible, amounting to zero social distancing. Which meant it was all up to the audience members to change seats if needed (and as space allowed) to try to self-impose at least six feet of distance.

The lax attitude became all the more clear when artistic director Mary Nye Bennett strode onto the stage without a mask herself, welcoming everyone back and remarking to the “lighter” crowd that “people are going to come back at their own comfort level, and I respect that.”

Personally, my own comfort level would have been a lot higher if we had been reassured that safety was a top priority.