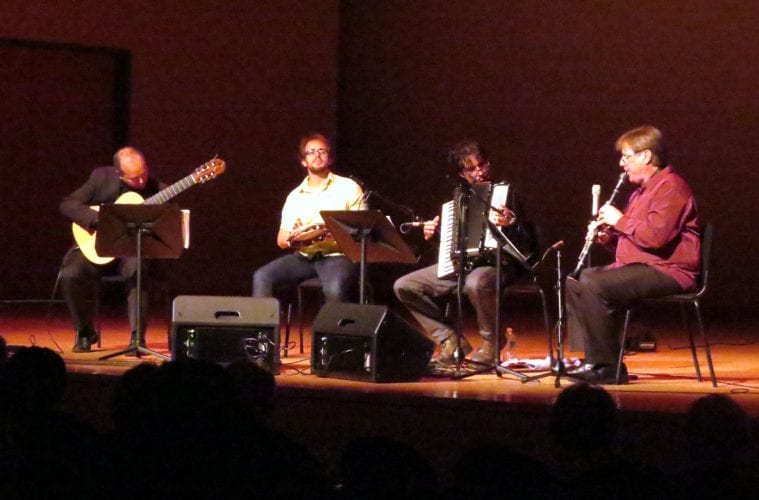 The concert was part of KSU’s two-day international conference, “Confluence and Divergence in the Portuguese Speaking World.” Fadista Catarina Avelar and her band, who perform Portuguese “fado” songs, were also originally scheduled as part of the concert, but had to cancel due to travel problems. Quarteto Viagem extended their own program to fill the gap.

Miller, Krakowski and Gonçalves are all Brazilian-born musicians now living in New York. Virginia-based Connell is the only member born in the U.S. The four have known and performed with each other individually for years but according to Connell, Thursday was the first time all four have performed together in concert as a quartet — sort of a debut, it seems, though one would not have known that from listening. There is excellent communication and musical interplay among these skilled musicians.

Choro is a genre of Brazilian music which had its origins in 19th-century Rio de Janeiro, making it the first identifiably urban popular music of Brazil. The genre arose from a conflation of European styles — such as polka, schottische, mazurka and habanera — and African rhythms, much in the way ragtime did in the United States. Over time, sub-genres of choro developed, such as choro-polca, choro-xote (descended from the schottische), samba-choro and a host of others.

In the beginning, choro was a social music played by informal groups at parties, pubs, homes and in the street. The type of ensembles that typically played it also took up the moniker choro. The music later spread through published sheet music for piano and early phonograph records. During the 1930s and 1940s, the musical styles under the choro umbrella reached their apex of mainstream popularity through live radio broadcasts, only to be eclipsed during the next two decades by urban samba. Yet it has continued unabated in amateur social groups.

That said, like any other music, Brazilian choro has evolved and Quarteto Viagem’s performance was not a dry purist’s history lesson about the late 19th and early 20th century. Certainly there are plenty of choro groups which do that. Quarteto Viagem offers up instead a more contemporary and quite lively take on choro as a living, evolving musical genre, even as they reach back across the span of traditional choro pieces for their repertoire. As much as the music’s roots are Brazilian, the Quartet’s pan-American identity comes across in performance as well.

The ensemble itself is perhaps indicative of that. Choro was originally played by a trio of flute, guitar and cavaquinho (a small kin of the guitar), but other melody instruments like Connell’s clarinet have long been accepted. Nor is the accordion foreign to Brazilian music. Brought over by Portuguese and Italian immigrants, some of Brazil’s regional music forms center around the instrument, like forro music of the country’s Nordeste. Miller’s 7-string Brazilian guitar, an amplified instrument of nylon-stringed classical build, is a mainstay of choro music — the extra low string facilitates responsibility for the music’s bass line.

The pandeiro, a hand drum with jangles that’s somewhat similar to a tambourine, is likewise an essential part of the identity of choro. Krakowski played an amplified pandeiro, with a clip mic mounted on the underside rim, which allows him to incite a wide variety of sonic colors from the instrument, almost as if a full drum kit.

The band played a dozen works, announced from the stage, from a playlist that represented the works of distinguished Brazilian choro composers. Selections included Jacob do Bandolim’s “Receita de Samba” and “Simplicidade” (which is anything but simple); Nelson Alves’s “Mistura a Manda”; “Murmurando” by Fon-Fon and Mário Rossi; the upbeat “Um a zero,” composed by Pixinguinha and Benedicto Lacerda; and “Evocação de Jacob,” Heitor Avena de Castro’s best-known composition — a kind of mournful, fado-like piece played by Connell and Gonçalves as a duo for clarinet and accordion.

Even after playing for an hour and 40 minutes without intermission, the audience called the group back on stage for an encore, another Jacob do Bandolim tune, the spirited, pugnaciously jazzy “Assanhado.”

The title means “heated up” or “excited,” which is not a bad description for this kind of music.