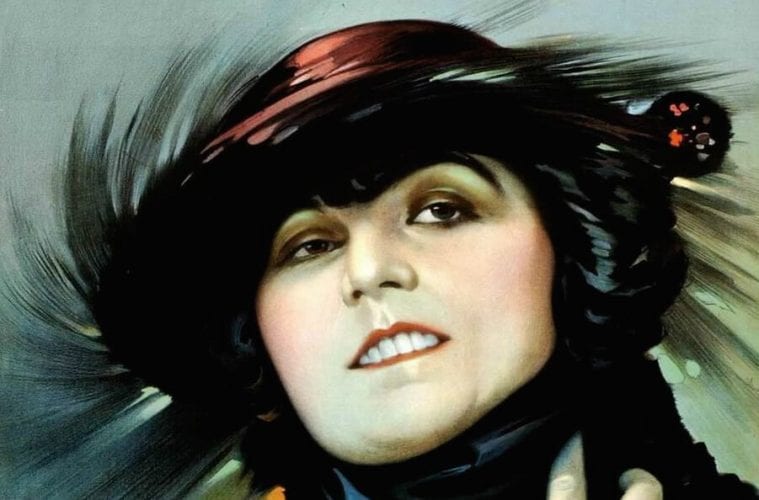 On Thursday evening, the Schwartz Center for Performing Arts presented a screening of the rarely seen 1918 German silent film The Yellow Ticket (Der Gelbe Schein) starring Pola Negri and directed by Victor Janson and Eugen Illés, with an original score by renowned Klezmer fiddler Alicia Svigals, performed live by Svigals, pianist Marilyn Lerner and clarinetist Laura DeLuca. Matthew Bernstein, chairman of Emory University’s department of film and media studies, introduced the film, and moderated a question and answer session between the musicians and audience after the screening.

It’s important, up front, to clarify a myriad of potential confusions surrounding this particular film for the reader who wants to pursue further research. The film was based on the 1914 play The Yellow Ticket, by English dramatist Michael Morton, which had a Broadway run of 183 performances starring Florence Reed and John Barrymore. The Broadway play was successful enough that a total of four films were made of it, three in the silent film era, then a 1931 talkie under the name The Yellow Ticket starring Elissa Landi and Lionel Barrymore (John Barrymore’s brother).

Der Gelbe Schein was the final silent film version, made at the Tempelhof Studios in Berlin and created as anti-Soviet propaganda. It was released in 1918 in Germany, then released in the United States in 1922 by Paramount Pictures under the title The Devil’s Pawn.

Most copies of the original film did not survive World War II and the German Nazi regime, which allegedly sought to eradicate all extant copies. It was restored from incomplete nitrocellulose (cellulose nitrate) prints by Kevin Brownlow, and the digitally restored version was released on DVD as The Yellow Ticket in 2011 as part of a three-disc set of actress Pola Negri’s early films.

In 2013, Svigals — a cofounding member of The Klezmatics — composed her new film score for violin and piano, as well as her own newly translated intertitles, which were inserted in the film, and began live screenings with pianist Lerner. That version is also available on DVD. DeLuca’s clarinet part, heard in Thursday’s performance, was added to the score later. In addition to her violin part, Svigals also sang occasional vocal parts.

Svigals’ score is entirely original, although it may sound like what she called “fake folk music” during a conversation in the lobby, drawing elements of style as it does from Klezmer and from other traditional eastern European idioms of the film’s era, evoking the atmosphere and cultural flavor of the film’s settings in a Warsaw ghetto and in St. Petersburg.

The significance for the film is that while it was an anti-Soviet (or anti-Russian) propaganda piece, the film also partially serves a documentary purpose as a record of the Warsaw’s Jewish ghettos of the time, long before their destruction in World War II.

The film’s two directors, Janson and Illés, had theatrical backgrounds. That shows both in their use of sets to express drama as well as (in the midst of an overall melodramatic style) the subtle facial expressiveness of lead actress Pola Negri, who plays the young Jewish scholar Lea Raab. Negri (born Apolonia Chalupec) would go on to achieve international fame as a silent film star.

In Der Gelbe Schein, as a Jewish woman, Lea is obliged to accept a disreputable “yellow passport” to go to St. Petersburg, where her goal is to attend its esteemed university. Because of the “yellow passport” (the German word Schein in this use can be variously translated as ticket, license, certificate or note) she must do so under disguise as Sophia Storki, the deceased sister of her Polish tutor, Ossip Storki. The story’s general premise is of a Jewish woman facing anti-Semitism in Russia.

In the lobby after the screening, when almost all audience had already departed, it was interesting to listen in on a brief conversation between Svigals and local violinist Chip Epstein about Klezmer fiddle inflections and ornamentation, and to learn that Svigals has created a set of videos on the topic, which can be found on YouTube. In addition, she devoted a full CD, Fidl (Klezmer Violin), to the music.