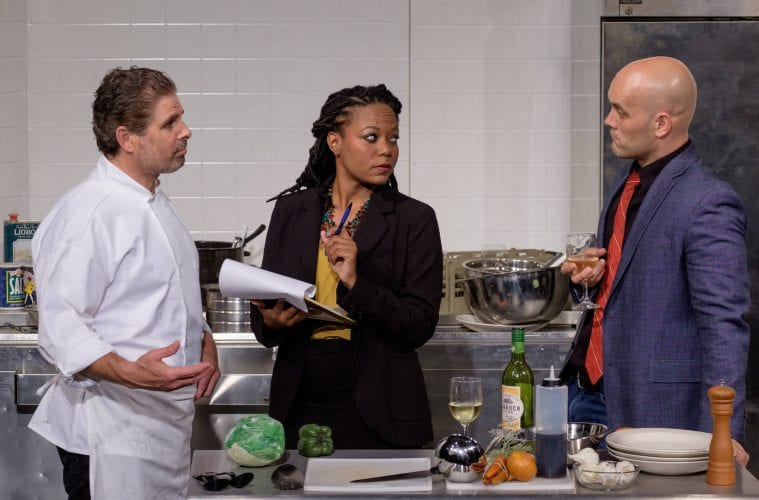 Review: Horizon’s “How To Use a Knife” cuts deep with stellar acting by strong ensemble

The restaurant kitchen of a New York eatery is not one for the faint of heart, at least not in the new drama How to Use a Knife. Will Snider’s manic play, running through June 25 at Horizon Theatre, tries to mix comedy and drama as part of its entrée but goes down most palatably when it focuses on its absorbing characters.

The recipient of a National New Play Network Rolling World Premiere last year, How to Use a Knife saw bows last year in four American cities. This is the fifth production.

Inside the kitchen of a current-day Wall Street restaurant, the regulars are busy assembling orders. Carlos (Tony Guerrero) and Miguel (Orlando Carbajal Rebollar) are Guatemalan line cooks who prepare food, and young Jack (Jeremiah Parker Hobbs) is a runner/busboy busy grabbing it and taking it to customers. The dishwasher is Steve (LaParee Young), who is from Uganda and who — at first glance — observes a lot but has very little to say.

On this day, the crude owner of the restaurant, Michael (Brad Brinkley) — who is not known for treating his staff with much respect — makes an appearance and welcomes new chef George (Brian Kurlander). A recovering alcoholic, this is George’s first gig since he hit his bottom. Yet this upscale burger and steak place is far from what he is used to.

George — who is half Puerto Rican and yells out at one point that he hates white people — has his own way of doing things and expects the same from those around him. He is particularly hard on Jack, who wants to be a writer and makes no bones that this is a job for him, not a career.

The only other character is Kim (Cynthia Barker), an ICE investigator who pops up to ask questions.

Activity in the kitchen itself can be nonstop, even though this one has its own peak times and down times. It’s not a politically correct arena either — jokes abound about nationalities, and it’s suggested at one point that Jack could go to Christopher Street and sell himself for money. Ouch! Even when the kitchen is busy, though, George almost forces his staff to stop in their tracks and listen to his tirades.

George forms a friendship with Steve in part when they decide to trade skills. George gives Steve culinary lessons in return for tips on meditation. As it turns out, the two also have some similarities.

The Waffle Palace — set inside a Waffle House-type establishment — was a big hit for Horizon and, at least on paper, this seems like it could be similar. Yet the shows are drastically different. This one is much darker, with some unsettling moments. A character’s firing is both brutal and unfair. The playwright spent some time himself working in a restaurant kitchen and was amazed by its cross demographics and diverse nationalities. It all has a realistic feel to it. The set by — who else — Moriah Curley-Clay and Isabel Curley-Clay gets the hustle and bustle kitchen all right. It’s a character in its own right.

Having said that, Snider doesn’t always successfully intertwine his laughs among the drama. The characters of Carlos and Miguel are played largely for humor, and sometimes their joking feels extraneous and forced. The work is at its best as a character study. The show is directed by Carolyn Cook, one of the city’s most versatile, capable actresses, and she has drawn a terrific ensemble. The production runs 110 minutes sans intermission, and Cook paces it commendably, even if a few early scenes feel repetitive.

The actors do a swell job of bringing this to life. Even Barker, in a fairly small role, makes an impression. The others are uniformly solid. Brinkley’s arrogant owner — who used to work for George — is played with appropriate smarminess, while Young makes Steve a man who may not be exactly who he seems.

Yet it’s Kurlander who has the key role. His George is lewd and unapologetic — and fascinating. The actor makes no attempt to soften the character or make him likable. He’s who he is. The character has a meltdown near the end that feels real and raw. It’s one of the best performances of the season. Cannily, Snider makes the two central characters — Steve and George — about as outwardly different as he can. George is loud and brash, never without an opinion or a crude comment, while Steve is soft-spoken and mild. Finding the symmetry between them can be a stretch, but the performers make it work.

How to Use a Knife may not pierce as sharply as it wants, but it definitely has a potent blade. It’s worth making a reservation to see.