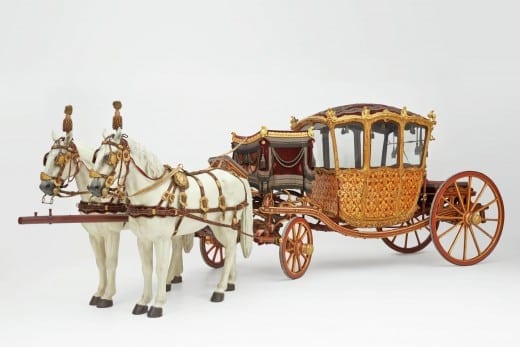 No matter who you are, you’re bound to find something fascinating in Habsburg Splendor: Masterpieces from Vienna’s Imperial Collections at the High Museum through January 17.

Each object is captivating in some way. Some have a curious touch of the weird, and many are truly masterpieces that invite and reward hours of quiet contemplation. Taken together, as masterfully curated by Dr. Monica Kurzel-Runtscheiner, director of the Imperial Carriage Museum in Vienna, the objects tell a vivid story.

For more than 500 years, the Habsburgs were Europe’s most powerful family. Its empire stretched across the continent including most of central Europe, Spain, Belgium and parts of Italy. As the Holy Roman Emperors, they ranked as the most powerful aristocrats in the world, ostensibly sharing earthly importance only with the Pope; they were related by blood or marriage to almost all the thrones of Europe.

In their many palaces, they amassed a collection of the best of everything: jewels, precious metals, Renaissance paintings, fine silk, classical Greek and Roman works, medieval arms and armor, tapestries, ceremonial carriages and opulent costumes. Arranged more or less chronologically, the exhibition offers a look at about 90 representative objects from the massive collection currently housed in the Kunsthistorisches Museum in Vienna.

The exhibition centers on a gallery of exquisite Renaissance and late Renaissance paintings that entered the Habsburgs’ collection in the 18th century, masterpieces of a significance we rarely get to see in Atlanta: Giorgione’s poetically ambiguous The Three Philosophers, Hans Holbein’s vivid portrait of Jane Seymour and Tintoretto’s Susanna and the Elders as well as paintings by Caravaggio, Titian, Correggio and Velasquez.

The exhibition begins with displays of arms and armor, suggesting the early military conquests that helped bring the Habsburgs to power beginning in the 13th century and also showing their early interest in finery and display (many of the suits of armor were meant for competition and aristocratic show on festive occasions, not battle.)

We’re accustomed to thinking of armor as almost ludicrously clanky and ungainly, but it’s easy to see how beautifully jointed and mobile the pieces are, a masterful blend of technology, craftsmanship and art.

The Habsburgs’ omnivorous collecting is apparent in a gallery suggestive of a wunderkammer, or a room of wonders, where discoveries, curiosities and rare materials, many arriving from the New World, were commonly displayed. Scientific instruments and decorative objects made from strange materials — walrus tusk, rhino horn and coconut shells — are shaped into elaborate carvings and mounted on jewel-encrusted stands of precious metals. They’re not as easy to call beautiful in the sense of the paintings on view, but they’re compelling in their own right.

The “Habsburg splendor” is evident in the court costumes, including gorgeous gowns from the late 19th and early 20th centuries and the fur coat and plumed white hat 4-year-old Prince Otto wore on the day of his coronation. And in the show-stopping carriage designed for the imperial children and sleigh with carvings by master craftsman Balthasar Ferdinand Moll, in which the seats seem almost to float, so intricate and seemingly effortless is the Baroque wavelike design.

What’s most impressive about the exhibition’s organization is how easily and simply it tells a complicated story; a robustly comprehensible narrative inevitably emerges, its odd twists and turns told primarily through the objects themselves, but also spelled out in more detail in excellent gallery text and the exhibition catalog.

It may be a slightly heretical opinion, but in some ways the exhibition provides a more interesting, more pleasant and more digestible perspective on the Habsburgs than a visit to the Kunsthistorisches Museum and the related imperial museums and palaces of Vienna, where room after lush room of masterpieces and luxurious objects easily becomes overwhelming and the mental serenity required to slow down and truly contemplate a masterpiece can be hard to achieve.

Habsburg Splendor offers a fascinating doorway into European history and art that’s worth as many visits as you can manage while it’s here.