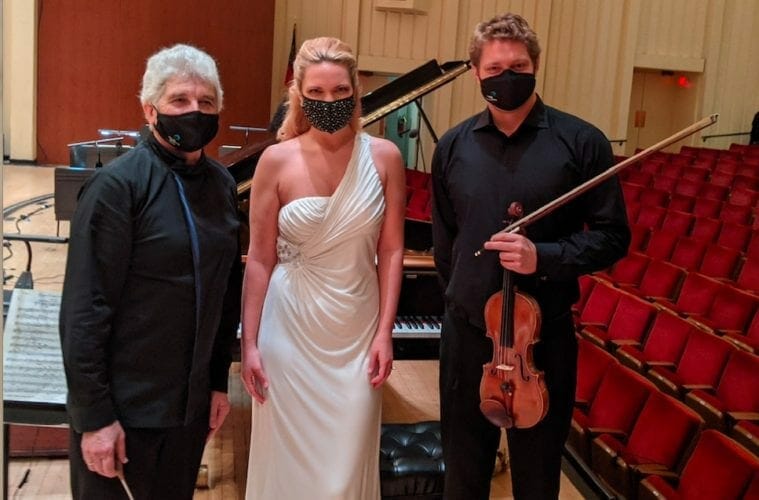 Conductor Peter Oundjian returned to Symphony Hall for the latest in the Atlanta Symphony Orchestra’s excellent Behind the Curtain series of streamed performances. The concert was recorded in January for May 13 online premiere. This delightful program was comprised of three disparate pieces — two that bask in the breezy exuberance of youth, joined by a third that reflects a gravity born of maturity and challenging life experience. It marked the ASO debut of pianist Julie Coucheron, an assistant professor at Kennesaw State University and the sister of ASO concertmaster David Coucheron.

Franz Schubert’s buoyant Symphony No. 5 was written when the composer was barely 19. The young musician was immersed in the creations of Mozart to the point of obsession. “They show us in the darkness of this life a bright, clear, lovely distance for which we hope with confidence,” he wrote in his diary, “O Mozart, immortal Mozart, now many such comforting perceptions of a brighter and better life has thou brought to our souls!”

Mozart’s influence is clear in the symphony’s rather light orchestration — there are no clarinets and no timpani — but Schubert’s own voice shines through with a brief four-measure introduction (a sort of musical “curtain” some have called it), after which Oundjian and the ASO had us on our merry way. There is a dancelike interplay of woodwinds and strings weaving through this piece, which the players deftly exploited straightaway in the opening Allegro. The flutes were particularly responsive here, before the violins sensitively took up what is one the of the composer’s most enchanting string melodies.

Schubert’s spare orchestration allows each section to shine winningly, and the ASO did so here with exceptional grace in the Andante con Molto. There was yet more incisive work from the strings in the recapitulation of the Menuetto’s primary theme. The final Allegro Vivace was great fun, and vigorously rendered through Oundjian’s brisk tempo as all forces zipped through those lilting triplets with precision and verve.

The contemplative Andante Cantabile for String Orchestra by Florence Price provided a marked contrast to the optimistic sound world of the Schubert. It has taken the musical world some time to fully appreciate Price, who noted early on, “I have two handicaps — those of sex and race. I am a woman and I have some Negro blood in my veins.”

The Andante Cantabile was originally the second movement of her String Quartet No. 2, written in 1935 when Price was 48. The movement was heard here in an arrangement for string orchestra. The ASO did Price proud with an ineffably beautiful traversal that rendered the work’s poignant fusion of European and African American influences perfectly. An augmentation of the original quartet with additional basses lent a telling gravitas here, and the violins and cellos were lovely in their delicate transparency.

Mendelssohn’s glittering Piano Concerto No. 1 was written in about three days when the composer was 21. He didn’t much care for it. “It always pleased people very much, but me very little,” he later said. Nonetheless, it was a smashing success from its first performance. Even the hypercritical Berlioz left an admiring impression of it with a humorous story about a piano that refused to stop playing its glorious melodies even after being smashed to bits.

The concerto was given a dazzling performance by the internationally celebrated Norwegian piano virtuoso Julie Coucheron (sister to ASO concertmaster David Coucheron, with whom she often collaborates. In camera close-ups they almost looked like the same person with different stylists).

Julie Coucheron exhibited dizzying virtuosity, dashing up and down the keyboard like a meticulously calibrated musical cyclone. The opening movement was thrilling as the timpani finally got into the act and ASO’s disciplined brass announced the transition to the second movement. Coucheron then created a sense of gentle reverie in the Andante before launching into the final movement with astonishing pyrotechnical flair.

A live audience would have gone wild. Coucheron’s achievement was all the more impressive given that she had not performed the piece since she was 12 and jumped back into it as a result of an 11th-hour program change.

Oundjian was fun to watch, often moving with the grace of a dancer as he spirited his players through the evening. Between selections, he spoke movingly about the experience of musical performance in the pandemic era. “This is our nourishment,” he reflected, “and we’ve been somewhat starved.” That such artistic hunger can translate into inspiration was cogently displayed in what was another memorable concert from the ASO.