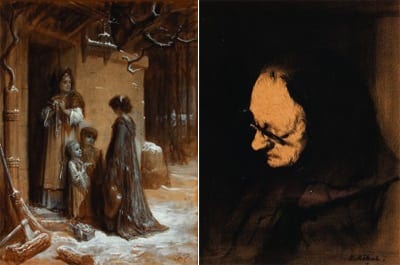 The Oglethorpe University Museum of Art is devoted, among other things, to a genre of art that is one of the oldest human endeavors. Figurational mark-making, whether it portrays animals or humans, has been with us for tens of millennia since its birth in the caves of southern France and southern Africa, and what we see at Lascaux and Chauvet is repeated in the French Academy. 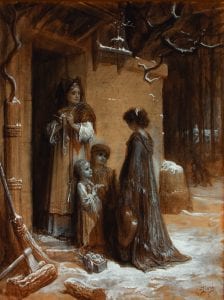 There are stylistic differences between the mark-making of the artists of the French caves and that of the 19th-century academic masters in the current Oglethorpe show, of course (masters in the gender-inclusive sense; Sarah Bernhardt was a painter and sculptor as well as an actress). But in the act of drawing, the spontaneous movement of the hand comes into play, even if the work of the academician is to disguise the spontaneity with subsequent craft.

“Nineteenth-Century French Master Drawings and Sculpture From the Schlossberg Collection” uses museum-quality works from an Atlanta collector to illustrate the range of mark-making that was possible within the aesthetic limits of a single European realist tradition. Ingres, who headed the French Academy for the first half of the 19th century, is only one of the superstars on view here. Bernhardt, Corot, Delacroix, Daumier, Doré, Fantin-Latour, Gauguin, Géricault, Gérome, Guys, Maillol, Manet, Millet, Pissarro, Puvis de Chavannes, Renoir, Rodin, Rousseau (Théodore, not Henri), Seurat, Sisley, Tissot, Toulouse-Lautrec and Vuillard appear in this exhibition, alongside less famous artists whose drawings are every bit as dazzling. (The tonalities of black in a pen-and-china-ink-over-charcoal image by Théodule Augustin Ribot would put Ad Reinhardt to shame.) 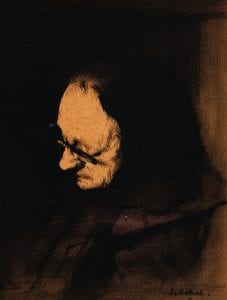 Are my references to the Chauvet cave and the New York School of abstraction slightly lacking in reverence toward the great Classical and Renaissance traditions so eloquently evoked by museum director and curator Lloyd Nick in his catalogue introduction? Of course. In order to understand what makes the Classical and Renaissance inheritance great, we need to set it in the context of the whole global artistic endeavor, between 30,000 and 40,000 years of art and counting.

But we also need to learn to see what we are looking at, and for that there can be few local resources as potentially rich as the 105 bronze sculptures and works on paper that Nick has selected from Dr. Michael Schlossberg’s brilliantly chosen acquisitions. The masters of the 19th century were at the top of their game even when they were doing no more than making notes toward the production of something else, and the spontaneous energy of the educated gesture is as evident here as it is in any piece of Zen calligraphy. The far from instinctive but still spontaneous act of controlled representation is also on display in a fair number of fully finished pieces, including an allegory by Doré that illustrates one of Fontaine’s fables. (For simplicity’s sake, I am choosing not to consider the sculptures, which raise different but parallel issues.) 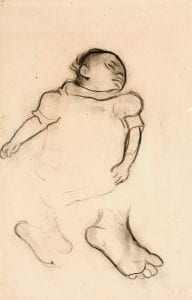 Of course, individual sensibility is evident throughout the exhibition. Some of Gauguin’s portrait sketches are just short of cartoons, while his sensitive notations of the posture of a sleeping toddler are well en route to composing the part of the painting into which the image found its way.

A (very) few of the drawings here are examples of the formal figure study that gives “academic drawing” a bad name, but even they are superb, indispensable reminders of the rigorous discipline that goes into the acquisition of artistic freedom, practice as repetitive and ultimately transformational as the training of any Buddhist monk.

The goals of the two practices, of course, are quite different, and I have often used Oglethorpe’s embrace of both traditions (the calligraphy of “Zen No Sho” was the museum’s only non-representational exhibition of which I am aware) to discuss the implications of all this.

You can notice how the chalk marks on the nose of a thoroughly traditional portrait drawing relate to the gestural marks that stem from a tradition half a planet away, or decide that you disagree. Or you can just luxuriate in the customary pleasures of connoisseurship. It is a venerable and legitimate option.

The show is, as Nick points out, an excellent tool for traditional art education, and it ought also to be approached with this mind. But the Schlossberg Collection reveals much more than how a style and a visual strategy persists from the offhand study of a figure to the execution of a monumental canvas, and that added dimension is what makes this collection far more than (forgive me) academic.