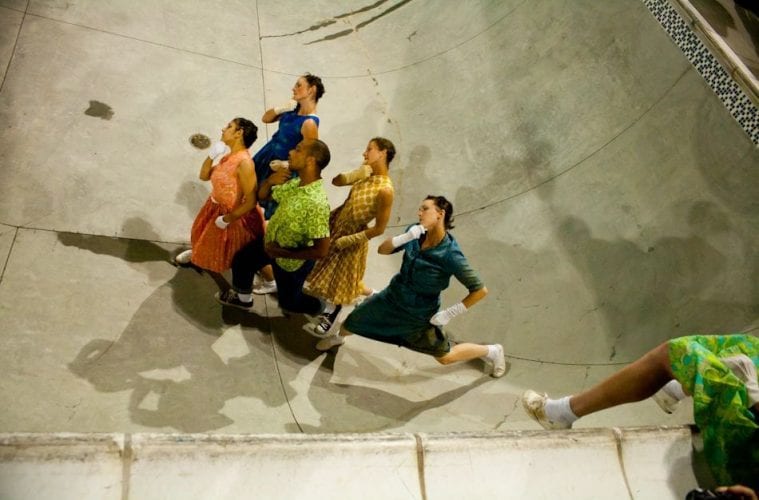 GloATL dancer Virginia Coleman balanced precariously on the rim of one of the Old Fourth Ward Skatepark’s giant concrete bowls wearing a circa-1962 blue-and-green floral chiffon dress, complete with flared skirt and petticoat. Half of her body rested, calm and contained, on the flat deck surface; the other half, including a prominent white-gloved hand and a bobby-socked foot, hovered tentatively over the deep basin. It was as if she was about to drop off the edge of the stable world into an unknown place full of rapid twists and turns, the risk of falling and the exhilaration of flight.

Choreographer Lauri Stallings’ latest site-specific work, “the search for the exceptional: a work on a theme of intimacy,” was performed three times over the weekend at the Skatepark. (Full disclosure: this was a commission from the Possible Futures foundation, founded by Louis Corrigan, who also is the chairman of ArtsATL’s board of directors.)

For these performances, Stallings hoped to help reverse the historical Atlanta “migration pattern” of “white flight” to the suburbs that began in the 1960s, by luring people back into the central city, to a little-known Atlanta BeltLine site, and to begin dialogue about the city’s public spaces. This she accomplished. The performance I saw, on Friday evening, lasted about an hour and 20 minutes and attracted a good-sized crowd, large enough to feel as if it was a special event, small enough that the performance was mostly visible.

Stallings’ stated goal was to re-imagine “negotiations between everyday citizens in these intimate public spaces.” If that was achieved, it had little to do with the historical references. It happened largely by blending two different movement disciplines: Stallings’ choreography and the sport (or art) of skateboarding.

Before, during and after the dance performance in the basins and around the grounds, skaters, mostly young men and boys, took turns riding the basins’ slopes and curves with daredevil finesse. The several huge concrete bowls, contoured in rounded, organic forms, have a feeing of movement and suspension, much like the moment when a skater banks around the curved wall, gathers force and speed, then catches a breath of flight above the bowl’s rim. It’s a discipline that requires as much awareness of body, force and speed as gloATL’s.

It was clear that skaters and dancers had developed a sense of trust. A lone dancer, Nicole Johnson, stood as a pedestrian, immobile on an island as skaters whizzed by. Another time, a skateboard flew inches away from helmet-clad dancer Nicholas Goodly, who never flinched.

In pure movement terms, Stallings made a case for the idea that the music of the 1960s, hugely influenced by African-American rhythm and culture and the body’s physical response to it, helped free society from its restricted ways of moving and thinking and incite the era’s social upheaval. Ryan Huff’s compilation of music from the time by Ray Charles, Bobby Freeman and Jay and the Americans introduced rhythms and a spirit that seemed to change the dancers’ postures and gestures, which had begun with a sense of uprightness and self-containment. The rhythms gave rise at first to a giddy awkwardness among the six women, all in designer Jeanne Fore’s 1960s-style dresses, wigs and bobby socks.

A multi-hued pattern of refracted light was cast on the lawn as they danced, in lines, coming together at times as partners as if in a far-flung sock hop. Then they moved as if limbs, shoulders and hips had separate wills — sometimes they moved in synchrony, at other times they lurched and flailed as if in conflict with one another.

Later, in a solo under a shelter supported by purple steel girders, Johnson began quietly responding to the beat of African drums, which rolled into a layered piece of popular music. As she danced, she seemed to discover a newfound inner grace by awakening rhythmic pulses and fluidity in her spine, shoulders, ribs and hips. The effect was profound and emotionally freeing.

One basin became like a pool, perhaps referencing Stallings’ childhood summers spent at public recreation centers. Coleman appeared in a red 1960s-style swimsuit, purse in hand. Micah Stansell’s film, shown on iPads set up around the basin’s perimeter, depicted early-‘6os-era women suspended underwater, fully clothed with purses in hand and pearls around their necks, in their fully furnished living rooms. (Large-scale projection of Stansell’s work proved impossible because gloATL was unable to secure permission to turn off park lights.)

One or twice Coleman tried to climb out of the basin, but she could do so only with assistance from dancers up on ground level. Lastly, as she struggled toward the rim, four men in the audience reached to assist her without hesitation. It was one of those spontaneous, “relational” moments that Stallings strives to create.

The overlay of skaters with 1960s references seemed disjunctive at times, and the loose structure of such public dance performances made it difficult at times to know where to look and to navigate the crowd. But the main thrust of the work — to rethink the city’s history while watching two different movement disciplines achieve synchrony in a new public space — was exceptional. And to encounter friends and meet new ones, as part of a “once in a lifetime” artistic experience, was a joy, festive and free.