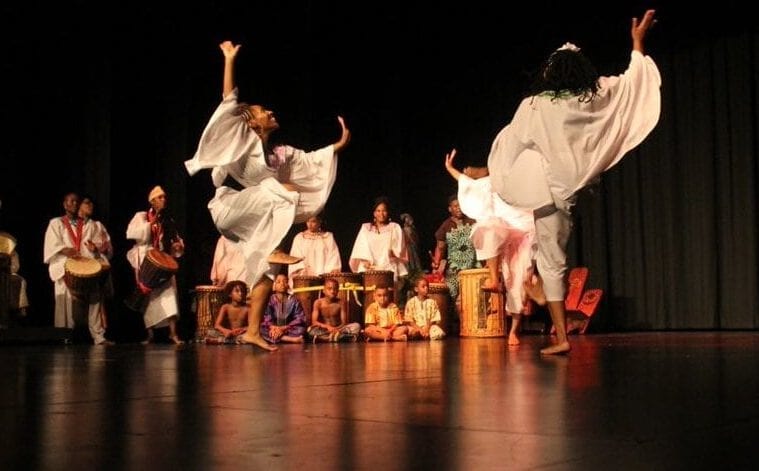 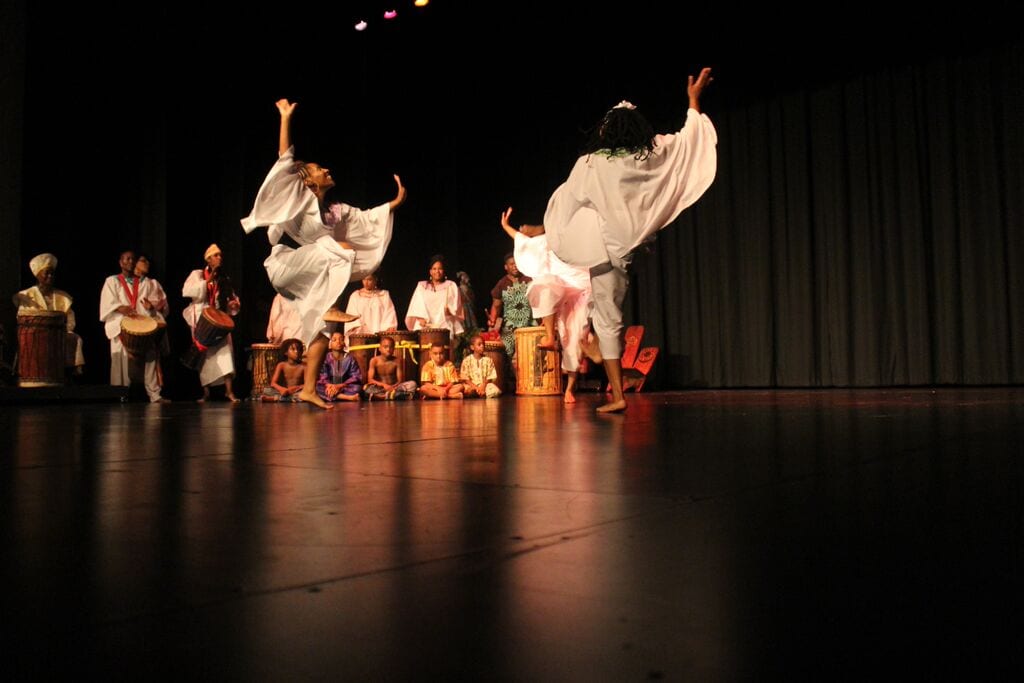 Halfway through Salute to Men, the African drum and dance concert by Giwayen Mata honoring manhood, about 20 adults and children gathered on the stage at the Drew Charter Senior Academy Theater to watch Clint Smith’s five-minute TED talk, “How To Raise A Black Son In America.”

Smith, a poetry slam champion and Harvard PhD candidate, recalled the moment he realized that as an African-American male he would grow up in a world where a toy gun could be mistaken for a real gun; where a hooded sweatshirt could mean its wearer was a gangster. He was 12 years old, and his father pulled him away from his white friends during an after-dark water-gun fight out of fear someone might mistake the intent and put his life at risk.

Recent events have shown Smith, more clearly than ever, why his parents were so strict. In the past year, police and vigilantes have killed unarmed black men with alarming frequency. This has created a sense of loss in the community, said Omelika Kuumba, artistic director of the all-female dancing and drumming group. With Salute to Men, Giwayen Mata honored men’s struggles, victories and celebrations; Kuumba wanted men to feel nurtured, loved and validated.

Kuumba’s theatrical style is inspired by “Baba Chuck” Davis, who, like predecessors Katherine Dunham and Pearl Primus, studied traditional dances of Africa and the West Indies, and adapted them for American audiences.

What distinguishes Giwayen Mata’s style is a propensity to look squarely at contemporary issues, and to incorporate traditional African culture — music, dance, dress and some social mores — into the process of resolving these dilemmas. 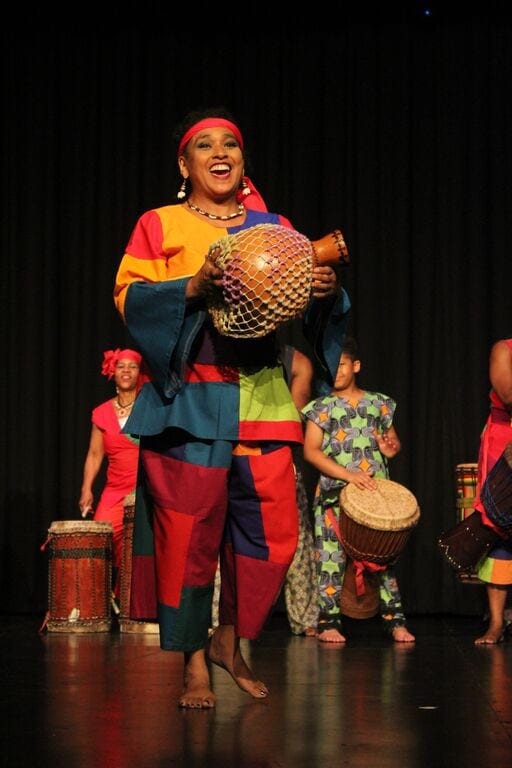 The work grappled with realities faced by African-American men, and the women who love them — and looked to African culture for solutions. In its narrative thread, modern-day characters found support from ancestors, both ancient and recent, as well as parents, teachers and mentors, to empower men and society as a whole.

Hosted by Dr. Maisha Kariamu Handy, the company of about 19 women shared the stage with 25-30 guest artists including male drummers, singers, dancers, jazz musicians and children. After formal tributes to Davis and Civil Rights leader Hosea Williams, performers greeted the audience with “Fanga,” a Liberian welcoming dance choreographed by Kuumba and Davis after Pearl Primus’ version.

Generously, dancers opened their arms outward and drew them in as they stepped rhythmically from side to side, spines pulsing gently. In free-flowing beats, they released their arms from heart to earth and heart to sky.

A dance tribute to Chuck Davis followed, performed by Nneka Kelly, Joi Hudson and Rashidah Richard in vivid colors. Often a pair exchanged supports with one another while the third danced solo before them in the troupes’ signature African-influenced contemporary style.

Dancers traced a lower leg in a circular path, which would travel up the leg and into the torso, creating a spiral that took them seamlessly into the floor. The ground seemed energized with high-stepping skips; the space around them enlivened as their hands vibrated upward and outward.

A woman wrapped her arms protectively around a young man, as Gail Vernon Zuri Sami Ra Maati Jordan recited her poem, “Our Sons Are Dying,” mourning the effects of black-on-black crime, racial profiling and police killing black people without consequence.

Drummers and dancers of Giwayen Mata emerged in full force with “Sofa,” a Malinke rhythm of Guinea, West Africa, traditionally done before warriors go off to battle or upon their return. Surrounded by a semi-circle of drummers, four women strode from upstage wings dressed in multicolored patterns. Their feet pulsed against the floor to repeated accelerating rhythms, every step gathering power from the ground as they curved their upper bodies forward and then arched back, arms opening, as their heads lifted up to the sky.

The young man studied the dundunba, and danced a vigorous martial arts dance of Guinea to a weighted driving rhythm building pride and power. He joined other boys to develop the focus and discipline of a warrior. In reflection, it seemed a contemporary rite of passage.

Celebration ensued. Drummers framed the stage, while a trio on sangban, dundunba and kenkeni danced as they played, embellishing multiple polyrhythms with subtle motions of hips and torso. They played with a sense of joy that was absolutely enlivening, celebratory and emboldening.

A courtship dance and a jazz duet sung by Robert John Connor and Denise D’Neter Tichenor built to pitch, leading in to a final “dansa,” a Lamban rhythm from southern Mali that bounced with pride and confidence.

Everyone knows you don’t have to have African ancestors to be swept away by its music and dance — a sound and feeling that sharpens the senses, changes rigidity into flow and connects people with nature and one another. Whether there’s enough of this goodness and power to inspire deep societal change is hard to say. But as one women said to her girlfriends as they left the theater, “When the music hit, I felt no pain.”