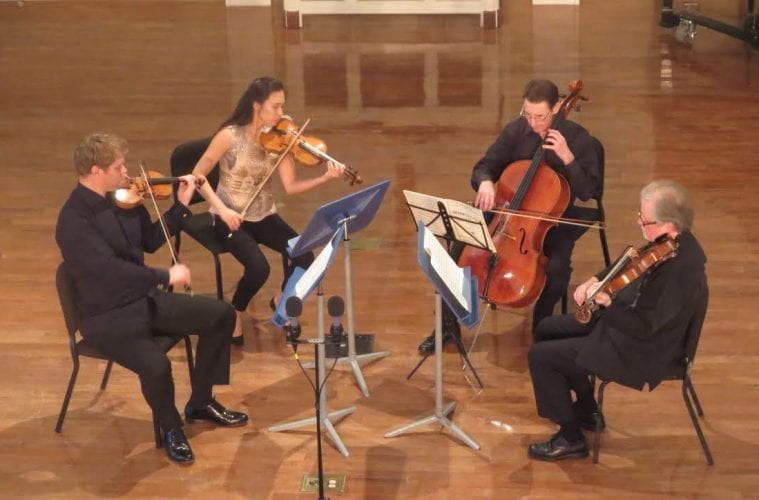 The Georgian Chamber Players performed a concert of music by Alexander Borodin and Igor Stravinsky on Sunday’s chilly, humid afternoon at Kellett Chapel, on the Peachtree Presbyterian Church campus in Buckhead. It was the opening concert of the group’s 2017–18 season.

The program contrasted the work of two distinctive Russian composers of different generations. Stravinsky was born only a few years after Borodin died, but it is worth noting that his father, Fyodor Stravinsky, a well-established operatic bass, knew Borodin and that one of the younger Stravinsky’s teachers, Nikolai Rimsky-Korsakov, was one of “The Mighty Five” group of composers with Borodin, the New Russian School of composers that lived and worked closely together in St. Petersburg.

Borodin, however, was not avocationally a musician and composer. His primary work and career was as a research chemist, physician and medical educator. Borodin earned great respect in his scientific profession, being particularly noted for his research on aldehydes, the independent discovery of the aldol reaction (a means of forming carbon–carbon bonds in organic chemistry, for which he was cocredited with Charles-Adolphe Wurtz), and establishing medical courses for women at Imperial Medical-Surgical Academy in St. Petersburg, where he held a professorial chair in chemistry. Nonetheless, his alternative life as a composer and cellist was hardly a secret. Aside from his orchestral works for concert and stage — such as the “Polovtsian Dances” from his unfinished opera-spectacle Prince Igor, the symphonic poem “In the Steppes of Central Asia” and several symphonies — Borodin composed a respectable quantity of chamber music, among which the best known are his two string quartets.

The program opened with Borodin’s String Quartet No. 2 in D major, performed by violinists David Coucheron and Julianne Lee, violist Reid Harris and cellist Christopher Rex. Lee is the newest member of the group, making her debut performance in this concert. She is also the new principal second violin with the Atlanta Symphony Orchestra, which now means the quartet of strings in the Georgian Chamber Players are all principal chairs with the ASO.

Borodin’s Quartet No. 2 is fundamentally lyrical, so much so that themes from two of its movements were lifted for use in the 1953 Broadway musical Kismet — “Baubles, Bangles and Beads” from the scherzo second movement plus “And This Is My Beloved” from the melody-rich nocturne that is the third movement — along with tunes from six of Borodin’s other works. The result was a musical hijacking that catapulted his music into the center of American popular culture and won the long-deceased composer a posthumous Tony Award.

That penchant for melody is what marked Sunday’s performance of the String Quartet No. 2. Borodin wrote it as a kind of love song for his wife, Ekaterina Protopopova, possibly as a 20th-anniversary ode to their first meeting. It’s a love duet, actually, with the composer, himself a cellist, likely represented by the cello part, and his wife by the first violin.

Indeed, Rex’s cello was prominent, playing the evocative principal theme of the first movement in a high register right from the opening notes. It likewise has the first statement of the famously warm, romantic tune which opens the third movement. In between those, the happy, almost Mendelssohn scherzo interceded, often with a feeling of a buoyantly blithe ballroom waltz more than scherzotic flurry. The work’s energized final movement featured interesting, ear-enticing key relationships within otherwise conventional sonata form, and showed off well the composer’s capability at counterpoint. Yet it was mostly love and passion that remained richly redolent through the quartet’s end.

The second half of the program was a big contrast to the first: Stravinsky’s “The Rite of Spring” in a four-hand piano version by the composer himself, performed by pianists Julie Coucheron and Elizabeth Pridgen. Both Pridgen and Coucheron are noted for their work as collaborative pianists in chamber music, but have also become increasingly prominent as a duo piano team.

Even before the infamous 1913 premiere of the fully orchestrated ballet with Sergei Diaghilev’s Ballets Russes at the Théâtre des Champs-Élysées in Paris, Stravinsky and Claude Debussy played through the first half of the version for two pianists at a party in 1912. The wildly colorful orchestral “Rite” would over time become an essential part of symphonic repertoire. Composer/conductor Leonard Bernstein called it “the most important piece of music of the 20th century.”

Despite not having the broad palette of color that a full symphony orchestra affords, the piano version lends “The Rite” a certain percussive immediacy and drive that offers a few different insights into the music, and into Stravinsky’s very traditionalist mode of composing at the keyboard then orchestrating.

With shared technical acumen, Pridgen and Coucheron gave Stravinsky’s piece a raucous reading that stayed vividly alive through the course of its over a half-hour duration.