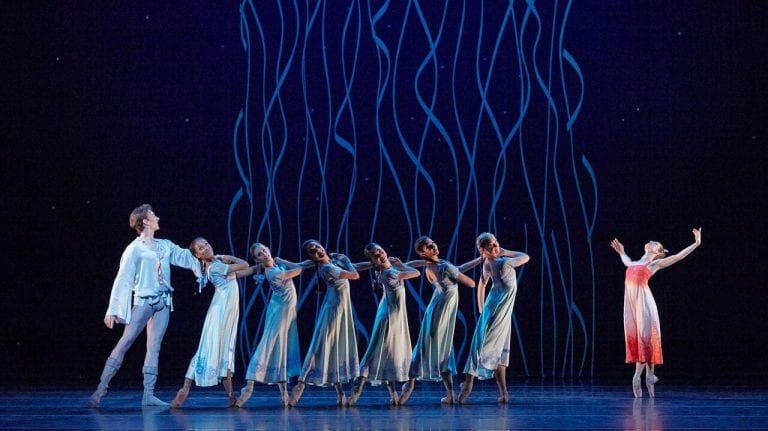 Review: “Firebird” shows Atlanta Ballet in period of transition toward its new identity

With Firebird, Atlanta Ballet presented a compelling, if slightly uneven, program of three works at the Cobb Energy Centre from April 14 to April 16, a performance that revealed a company in transition. News broke on ArtsATL about a week before opening night that 13 dancers, nearly half the company, will depart at the end of the season. Two apprentices and six company members will not have their contracts renewed for the 2017–18 season, and five company members are leaving by choice. The list of departing dancers includes some of the most high-profile members of the company, many of whom memorably danced lead and solo roles during their time with the Atlanta Ballet (and even in last weekend’s program): Tara Lee, Rachel Van Buskirk, Christian Clark, Heath Gill and Alessa Rogers are among those who will not be returning for the 2017–18 season.

Incoming artistic director Gennadi Nedvigin is taking a sharp turn back to adherence to the formal aesthetics and rigorous technique of classical ballet, a departure from the more eclectic, contemporary approach favored by previous artistic director John McFall. The recent performance showed that the Atlanta Ballet is clearly no longer the same sort of ensemble it was last year, but also not yet fully arrived at a new identity.

The program opened with a performance of George Balanchine’s Allegro Brillante. Featured dancers Jackie Nash and Jacob Bush (both of whom will remain with the company next season) had a wonderful lightness and energy to their movements, though overall, particularly in the ensemble sections, the piece lacked the luster and sparkle to truly come alive. The use of prerecorded Tchaikovsky music gave the work a canned quality, and there was seldom that palpitating hint of brash American jazziness that is often the hallmark of a successful Balanchine interpretation. Overall, there was something too bloodless and polite, even prissy, about the performance.

The company dove headfirst into the piece’s wicked sense of humor and its sense of visual invention. Male dancers waved rapiers, metaphorical phalluses that became comically literal when placed on the ground and stepped on to tilt erectly upward, and female dancers emerged in ludicrously stiff Baroque dresses that rolled on casters, sculptural forms that restricted their movement but which they could separate themselves from in an instant. The dance also featured a gorgeous series of duets; the six sets of couples memorably navigated the movement that gave lovely flashes of interlocked and uncoupling limbs, flowing between a sense of weight and lightness, rigidity and flexibility, eroticism and violence, separation and interconnectedness.

The last work on the program, and perhaps the most ambitious, was the title piece, Firebird, and it derived much of its strength from the use of live music. Guest conductor Beatrice Jona Affron gave the low, sinister, slow passages a lingering spaciousness, and tempos elsewhere were admirably swift and lively. Overall, the music was imbued with personality that brought the work to life. A moment of sharp staccato attack — when Jared Tan as the villain Kaschei appeared suddenly — even had a jump-in-your-seat, giggle-inducing effectiveness.

Visually, one longed for more of the lushly imaginative world of Russian fairy tales or the showy exoticism of the Ballets Russes, but designer Yuri Zhukov’s sparse scenic design had a staid, throwback, 1950s storybook sort of quality to it, and the Firebird’s strangely artificial bright orange wig was an unfortunate distraction. Still, Possokhov’s innovation of creating a love triangle at the center of the story added a touching, contemplative element to the otherwise featherlight fairy tale about uncorrupted innocence conquering evil. Possokhov’s movement for Nash, featured again here as a compelling Firebird, always maintained a succinct, direct and frequently gripping relationship to the music, and each of the leads potently created characters that outlined an admirably simple but effective narrative alongside Stravinsky’s complex music.

All three of the works were surprisingly brief. (I was strangely unprepared to read the final image of Petite Mort as an ending and was even somewhat taken aback when the curtain fell. Possokhov’s Firebird utilized Stravinsky’s abbreviated 1945 version of his full 1910 score). It made for an evening that was short and sweet, compact and effective, but also somewhat abrupt and inconclusive.

Overall, I, like many of the city’s ballet fans, am deeply saddened to see so many familiar and beloved dancers departing. But unlike many of the contemporary dance advocates I’ve heard from, I’m somewhat more agnostic about the company’s aesthetic return to a more traditional and regimented approach; there’s part of me that’s excited to see our ballet company perform more ballet. But strangely, the success of the vividly rendered contemporary work placed alongside the encased-in-glass, airless reading of the more classically inflected Allegro Brillante did little to fire my enthusiasm; instead it gave plenty of ammunition to those who would contend that the company’s primary strengths are, and should remain, in interpreting contemporary works.

Firebird provided an intriguing snapshot of a company mid-transformation. Perhaps the unevenness of the program was predictable given the aesthetic conflicts that were reported to be at the heart of the recent dust-up. Sad goodbyes are imminent, and it all has an even more touching, unresolved air because a satisfying, distinct and complete picture hasn’t emerged yet of what the company soon will become.