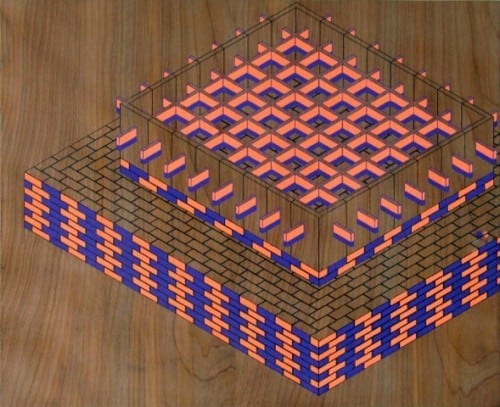 Italo Calvino explores the imagined possibilities of cities and the mind in his novel Invisible Cities. A similar idea pervades “Fictional Geographies,” at Whitespace gallery through September 7, an exhibition featuring Heidi Whitman, Ann Stewart, Joseph Burwell and Robert Walden, who is also the curator.

Walden describes the artists as “Builders” and “Cartographers,” reflecting the respective structural and maplike qualities of their works. It’s a curatorial conceit more than an organizational tool, as the exhibition’s hanging intermingles the two.

The strongest works are Stewart’s. The Atlanta artist creates dense, all-over compositions in black and white that are vaguely architectural — Frank Gehry meets Zaha Hadid in a shingle factory. Faceted, wrestling masses of positive and negative spaces are the result of her intuitive process. Using a fine pencil, Stewart draws intersecting geometric shapes and lines, curving and straight, erasing and reworking as she goes, filling in some areas and not others. Ghostly traces of erasure and incised lines become part of the composition.

Stewart’s first foray into printmaking (etching) is also on display. Her work translates well into the medium. In one, “Tethering Corollaries I,” a sheet of paper is bisected, the left side predominantly white, the right black, but each unique. The two sides are related; the plate used on the right is derived from the one used on the left (through a process called reverse aquatint). Like two sides of the same coin, they are linked by their difference.

Similarly labor-intensive, Walden’s drawings in ink and gouache on paper are also created through an organic process. The Brooklyn-based artist uses colored architectural pens to produce a complex network of curving lines that, like old cities in Europe or the Northeast, he builds upon without a master plan. The compositions suggest nerve synapses as much as street maps, conjuring up associations with brain mapping and psychological terrain.

Hung near Stewart’s “Tethering Corollaries I,” Walden’s “Ontological Surveillance Map 070212” is also divided into two different but related parts: a maplike drawing on the left and, on the right, a blown-up detail of that map. Playing on our familiarity with interactive maps and zoom features, the detail is not an enlargement but is actually hand-drawn (albeit using a projector).

Also based in Brooklyn, Burwell makes works that resemble product designs, architectural studies or some combination of the two. Using pencil and pigment pen on wood panel or paper, he produces hybrid structures that merge medieval and modern styles and combine disparate elements: a fortress, a pyramid, a heating-air conditioning component, a heating grate. Some elements suggest Lego pieces and crenellated castle walls.

A number of Burwell’s drawings, such as “Fort Ventilate,” have a slightly torqued quality, the result of isometric projection, a technique that allows more of the object to be seen than would be seen using true perspective — and one that he appreciates for creating an unreal sense of space.

Whitman’s cutout constructions are more literally structural. She makes drawings in ink, gouache and acrylic on paper, then cuts them out and attaches them with pins to the wall or a support so that they float about an inch or two from the surface. The shadows they cast are integral to the work (she even lists them as materials). They look a bit like crumpled, cartoonish maps, their linear elements skewed and broken.

Whitman made the connection to Calvino’s book in titling a series “Invisible Cites/Brain Terrain,” in which, as states on her website, “the structure of cities and the structure of the mind are conflated.”

Unlike architectural renderings or landscapes, the sites and structures depicted here are not practical or possible. To make them so would be to shackle the imagination.