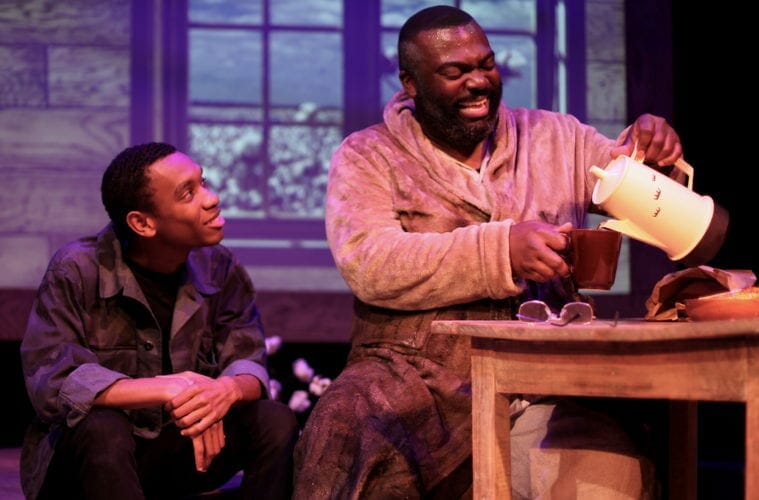 Lau'rie Roach (left) and Daviorr Snipes in "Br'er Cotton," which explores the intersection of race and police response in America. (All photos by Matthew Kellen Burgos)

In Vanguard Repertory Company’s Br’er Cotton (through August 18 at the Windmill Arts Center), we dive into the world of playwright Tearrance Arvelle Chisholm. He takes us to the Witherspoon household in Lynchburg, Virginia, where we meet Matthew, daughter Nadine — and most importantly — her son, Ruffrino. In a thrilling 100 minutes, Br’er Cotton unpacks the way Ruffrino sees and interacts with the world as a 14-year-old African American boy and how the past informs his actions. In today’s theater landscape, there are several archetypes that play out in almost every story about the black experience: the “youngblood story,” in which a hotheaded young man is told he must be a better man or see the world differently to survive; the “safe black,” in which the softest, most innocent depiction of a black man is created as a blank slate then abused to show the audience that bad things happen to “safe blacks” too; and, finally, the “it’s a parody, but the parody is just voicing an unheard and truthful opinion through humor.” The third, the most difficult to write, has propelled such successful plays as Branden Jacobs-Jenkins’ An Octoroon (seen at Actor’s Express in January) and the Jordan Peele movie Get Out.

Br’er Cotton (directed by VanguardRep cofounder Matthew Kellen Burgos) wades into each of these archetypes but never settles, and it suffers because of that. The script leaves so many points unresolved that theatergoers might leave wondering whether the piece is finished or still in draft form. You could validly argue that the playwright wants us to leave the show thinking, but I disagree. It’s ambitious to ask an audience to follow and digest a piece that is so dissatisfying in its conclusion. We get bouts of exposition but no payoff.

VanguardRep offsets this by assembling a cast of incredible actors. As Ruffrino, Lau’rie Roach (seen previously at both the Alliance Theatre and True Colors Theatre Company) shines and manages to tell a fully realized story from a teenager’s viewpoint. Every word he speaks is clear and pronounced to the last syllable, which is rare in most black-box shows. Many actors assume the audience will hear them and dial it back a bit, but Roach’s energy drives the play and keeps us engaged.

Daviorr Snipes as Matthew is another standout. Snipes (who was in VanguardRep’s On the Third Day last season) taps into some ancestral plane and becomes everyone’s grandfather in a way that seems familiar and natural. Beverlix Jean-Baptiste, Madeline Marconi and VanguardRep cofounder Sam R. Ross complete the cast.

VanguardRep, in its second Atlanta season, was founded almost a decade ago in Los Angeles to embrace challenging stories. With Br’er Cotton, the company fulfills its mission.