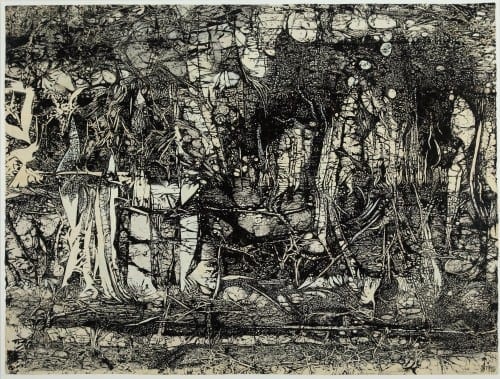 One of ArtsATL’s goals is to reveal the wealth of creative activity in Atlanta in hopes of inspiring readers to seek it out and experience it themselves. This summer, the High Museum of Art has given us a hand: “Drawing Inside the Perimeter,” on view through September 22, is a compendium of 56 works by 41 Atlanta artists, and it is wonderful.

The back story, which we detailed in a previous article, is important. Briefly, Judith Alexander, who died in 2004, left the museum money in the Lambert Fund to acquire works by local artists. But it wasn’t until the arrival of contemporary art curator Michael Rooks in 2010 that anyone made much use of it.

Rooks and Marianne Lambert, the art advocate for whom the fund is named, made it their mission to build an art-historical core sample of art by Atlantans. This exhibition spans generations, from artists in their 20s to at least one octogenarian, Ruth Laxson, still going strong.

If you’ve followed the Atlanta art scene, you will recognize most of the names here. If not, the show will be a good introduction, especially because the judiciously selected works usually hit the sweet spot of each artist’s practice.

Given years of complaints about the High’s disengagement from the local art community, the almost giddy mood that pervaded the opening-night reception was no surprise. For the artists, to be validated by a large museum can be a career game-changer. Ditto the Atlanta galleries, who gain a new tool for marketing the artists they represent. Several of them did a smart thing, mounting exhibitions of their artists who are included in this exhibit. That’s how they do it in the big leagues, of course, but everybody has to be playing the game, and, as suggested, that hasn’t always been the case here.

“In and Out,” an exuberant wall drawing by Rocio Rodriguez, is a perfect metaphor for a vibrant, changing scene. A celebration of mark-making and the rich possibilities of blacks and whites, it seems to revel in instability as well. One square teeters atop a stack; another seems to levitate. And Rodriguez’s energetic brushwork is motion incarnate. This is the confidence of an accomplished artist at work.

The contributions of Sean Abrahams and Susan Cofer contrast with the extroversion and gestural moves of “In and Out.” Both artists work small, with monk-like intensity. Abrahams, one of the youngest artists in the show, makes pen-and-ink tapestries of fantastical landscapes. Cofer, a longtime presence (and the subject of a recent High retrospective), brings ambiguous biomorphic forms into being with hundreds of almost microscopic pencil lines.

For artists who usually work in other mediums, drawings might offer insight into a more private endeavor. Teresa Bramlette Reeves’ “Scrapbook Drawing #4” offers a peep into one of her albums; it’s interesting to ponder her choices of clippings she saves.

Fahamu Pecou, best known as a painter, here reveals himself to be a fluid draftsman. As in his paintings, Pecou, or rather his alter ego, is the protagonist in “Unda Pressha.” Seen from the back but recognizable by virtue of his asymmetrical haircut, he represents stereotypical street youth holding up his “saggin’ ” pants.

At the recent reception honoring the newly chosen Working Artist Project fellows, of which he is one, Pecou said he was exercising his drawing hand in this study for an animation he’s working on, but the piece is certainly complete in itself.

Rooks and Lambert operated under a catholic definition of drawing; basically anything to do with (though not limited to) paper passed muster, which accounts for the presence of collages, one of Brian Dettmer’s carved books and, perhaps, Seana Reilly’s “poured” pieces. Created by manipulating liquid graphite, Reilly’s set of miniatures nonetheless suggests vast universes. One might pair her work with Don Cooper‘s cosmic “West Bindu.”

The exhibition is rife with connections of that sort: the impudent conceptualism of Gregor Turk and Nathan Sharratt, for instance, or the comic book/graffiti/tattoo vein mined by Sam Parker, Harrison Keys, Brandon Sadler and HENSE. Abraham, Parker and Andy Moon Wilson share cases of horror vacui.

Here’s an odd one: the conflation of popular culture and art history in “Louboutin/Brancusi (red),” a spare, elegant piece by Scott Ingram (also a new WAP fellow), and Daniel Biddy’s dense collage “Pattern-al Instinct (Gee’s Bend),” which makes reference to advertising, Islamic art and Gee’s Bend quilts and happens to include an image of Brancusi’s “Bird in Space.”

One of the benefits of living outside of a major art center is that it’s less tempting to follow the market, imitate mainstream darlings or strain for relevance. Most of the art on view here seems quite personal. That’s not to imply that artists here are unaware of what’s going on elsewhere or are eccentric loners, or that they don’t want to “make it”; it’s just that the absence of that pressure can be liberating.