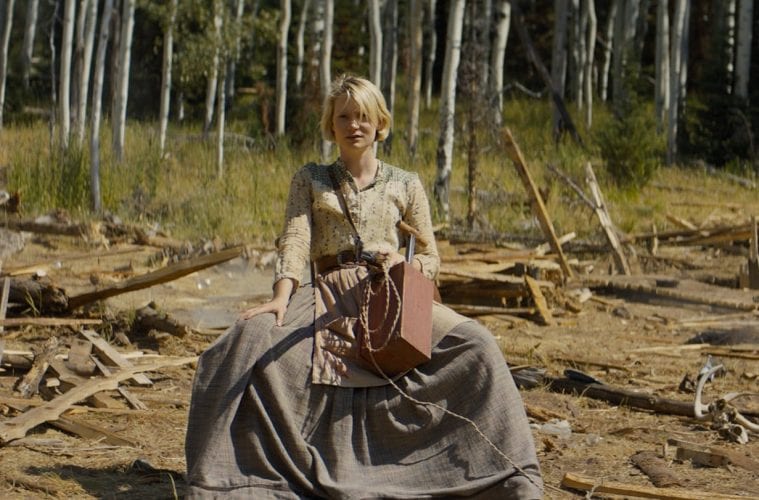 Review: “Damsel” puts a winsome and enduring spin on the classic Western movie

With one hand, the man holds a locket bearing the photo of his beloved. With his other hand, as he ogles her sweet face, he, well . . . he starts doing something you don’t usually see a feller doing in a Western. It’s one of the many rude/funny, off-kilter touches in Damsel, a cockeyed deconstruction of frontier romance.

To make a revisionist Western is hardly a new notion. Think McCabe & Mrs. Miller, Little Big Man, or Jim Jarmusch’s Dead Man (made when Johnny Depp was still a soulful up-and-comer, not a profligate punchline). You could even go back to High Noon and contend that it was subverting the Manichean, cowboys ’n’ Indians, Manifest Destiny tropes that had started to petrify onscreen Western sagas. Then, in 1992, Unforgiven drove a fatal, Oscar-winning stake into the heart of the traditional black hats vs. white hats narrative.

Far from that film’s dour tone, Damsel takes a winsome approach, more Cat Ballou than anything else. It’s proudly flaky. Matter of fact, the whimsy level is cranked so high at the start, I wasn’t sure I’d make it all the way through. (I have a pretty low threshold for twee.) I persisted, though, and was glad.

The movie kicks off with a couple of dusty, Sam Beckett-style misfits stranded in the middle of nowhere waiting for a stagecoach that never turns up. One of them is Henry (co-writer and director David Zellner), a Western newcomer fleeing a sad history in the East and looking for adventure in the new territory.

He eagerly asks the stranger beside him if he’s ever seen real-life Apaches or Comanches or Cheyennes — and what they are like. “Some are lousy, some are not, just like everybody else, I reckon,” replies the old preacher (Robert Forster). He further cautions Henry not to expect a shiny, brand new life out West: “Things are gonna be shitty in new and fascinating ways,” he says, before despairing of the stagecoach, stripping off his clerical gear and wandering alone into the desert.

Some time later, a rowboat pushes up on the Pacific Northwest shore and out hops Samuel Alabaster (Robert Pattinson), along with a miniature horse named Butterscotch. Sam’s the one carrying the locket with the photo of his beloved, Penelope (Mia Wasikowska). And he’s here to wed her, with the help of the local pastor — none other than Henry, who has taken on both the old preacher’s garments and, very loosely, his profession.

Samuel is a dandy who daintily sips at his rotgut whisky, earning the derision of the locals at the saloon (populated with Wild West grotesques, one of several scenes that shows the filmmakers trying too hard for overly familiar effect). Pastor Henry, by contrast, is a serious drunk and a bit of a coward, so he’s none too pleased when Samuel tells him that, before he can officiate the wedding ceremony, the two of them have to rescue Penelope from some no-good varmint named Anton, who is holding her hostage in a cabin somewhere in the hinterlands.

If this sounds relatively straightforward, don’t be deceived. Nothing is exactly what it seems to be. More interesting than Damsel’s middling whimsy (including patches of pointedly anachronistic dialogue) is the handful of narrative surprises it springs. There’s an especial doozy at the movie’s halfway point, totally changing everything we think we’ve been watching till then.

To say more would be saying too much. Damsel is often too quirky for its own good, but the cast is committed. Pattinson continues to relish mocking his own good looks and typecasting as the heartthrob of those rotten Twilight flicks. Wasikowska, always interesting in any film good, bad or indifferent, is fun here as a woman who proves that, if she’s a damsel, she’s nowhere near distress.

As for Zellner as the tipsy pastor, well, he’s perfectly all right. So is his codirecting brother Nathan, who turns up in a supporting role. But at the risk of sounding churlish, since the Zellners are already plenty busy as writer-directors, maybe two needier, better actors would have appreciated playing those characters.