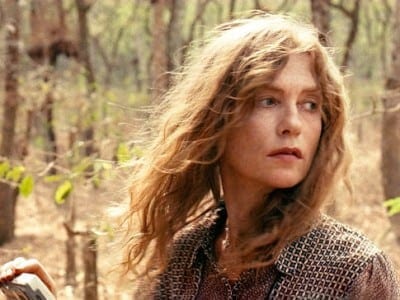 Review: Claire Denis’ spellbinding “White Material,” one of the best movies of the year

Child warriors creep through a forest, wielding rifles and machetes taller than they are. It’s a great symbol — both poetic and murderously real — for the madness poisoning the unnamed African nation in Claire Denis’ “White Material.” A drama about one woman’s personal, proud madness in the face of an entire country’s implosion, it’s as riveting and unsettling as anything I’ve seen in 2010.

A white Frenchwoman, director Denis (“Beau Travail,” “35 Shots of Rum”) was raised in Africa, and her first film revisited the country of her childhood. “Chocolat” (1988) dramatized the repressed attraction between a white married woman and her black servant, played by Isaach De Bankolé. If Denis’ examination of race, class and sexual relations was troubled then, more than 20 years later her view is even darker. 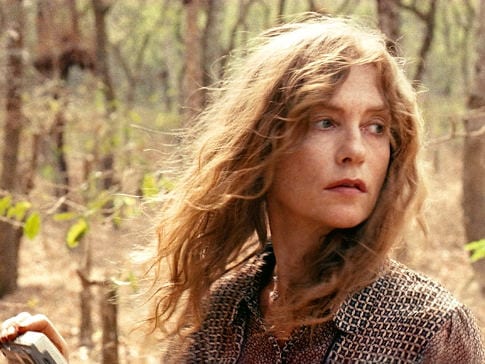 Here De Bankolé collaborates with Denis again, playing “the Boxer,” a guerrilla leader whom we first see staring at the ceiling, dead. “White Material,” presented as a time-shattering mosaic, moves backward and forward to this moment. And, as in “Chocolat,” De Bankolé’s character becomes entangled with a white female whose sense of colonial entitlement goes a little too far.

This is Maria Vial (Isabelle Huppert, above), a French transplant determined to harvest the latest crop of coffee beans on the plantation she married into. The estate was founded by old Henri Vial (Michel Subor), an African-born colonist and the father of Maria’s ex-husband André (Christopher Lambert). “Nothing’s mine, but I’m in charge,” Maria says as she tries to keep the harvest on schedule, even though the workers are fleeing en masse. They recognize that their country is in free fall, torn in two by ruthless army troops and bands of rebels (many of them children), both sides equally determined to shed as much blood as possible.

Maria acts as if the nation’s death convulsions are a mere nuisance. After her field workers flee, she heads into town to scout for replacements, paying off local thugs who block the road into town. André, meanwhile, is negotiating with the local mayor to secure safe passage to the border for himself and his adult son, Manuel (Nicolas Duvauchelle), who spends his days sleeping. 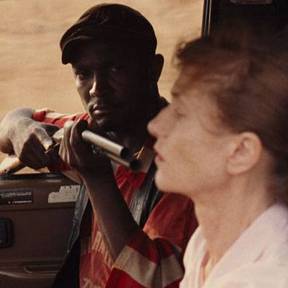 What Maria is able to ignore, everyone else sees clearly: things are not likely to end well — not for the native citizens caught between the army and the rebels, and absolutely not for interlopers like the Vials, dismissed by a fiery disc jockey as “white material” whose days of exploitation are over. While this may sound like a heavy-handed political film — a variant of “Hotel Rwanda,” say — it’s not. Denis uses her considerable visual skills and intuitive (if fragmentary) sense of structure to hurl us into a strangely beautiful experience of insanity and dread. The effect is like watching a housewife of Pompeii shopping for her daily groceries, blithely ignoring the strange rumblings in the earth.

While her ex-husband grows sweaty with fear and their son goes mad in spectacular fashion, Maria sees the danger around her as some sort of private game, a cosmic test of her personal mettle rather than an implacable threat to the lives of everyone she loves. If she loves. “How could I show courage in France?” she says rhetorically, when asked why she’s risking her life by staying. “I’d slack off, get too comfortable.”

Headstrong, unyielding and possibly bonkers, the role is almost too well-suited for Huppert. But it’s hard to think of anyone else pulling it off. Drifting in a pink cotton dress along dusty roads, or riding a motorcycle, one hand raised to stroke the hot air in a personal reverie, she’s bewitched by an alternative-reality version of herself and the continent. She refuses to acknowledge that it’s time — no, past time — to get the hell out of Africa. 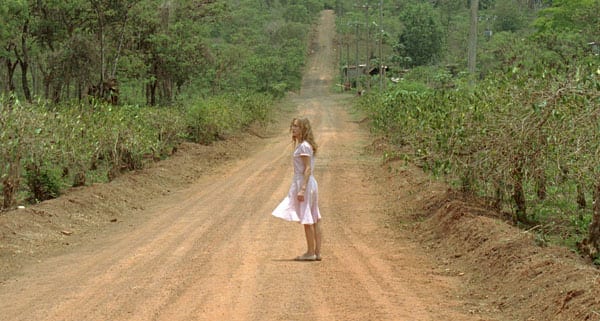