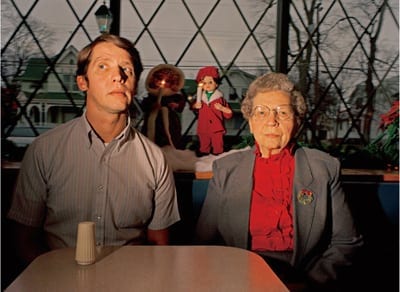 Chris Verene’s engaging new show at Marcia Wood Gallery, “Family,” brings together a quarter-century of photographs he has made of his extended family in his ancestral home town of Galesburg, Illinois, an economically hard-bitten place in the middle of the American prairie. Widely regarded as among the most important bodies of latter-day American documentary photography, the work — compiled in an eponymous book from Twin Palms Publishers — is both complex and accessible, and frequently occasions a variety of too-easy responses.

There is little reason, for example, to praise Verene for perseverance, as if it were remarkable in itself that a photographer should stay with a subject over a long time. Such an approach is just as likely in principle to proceed from a poverty of imagination as from a richness, and is just as likely to deplete rather to enhance our interest in the subject. In Verene’s case, praising his tenacity masks his keen ability to keep a familiar subject fresh and relevant over the span of a generation.

Likewise, he does not deserve particular credit for honesty. Honesty is the very predicate of documentary work, something we have a right to expect the photographer cannot do without. Candor, frankness and directness are different matters, and are not required: a documentary photographer can be honest and measured, honest and discreet, honest and wily — combinations that all describe Verene’s work — but to praise honesty itself as an accomplishment is inadvertently to call into question one of documentary’s foundational terms.

Verene also doesn’t deserve praise for liking his subjects or loving them, as if to offer a broad-spirited affirmation in response to the human difficulty we plainly encounter in his pictures. Such praise is condescending to his family, a disservice to the complexity of the work, and ultimately a coded form of self-flattery, inasmuch as we take him as a stand-in for ourselves, and his kind regard as a variant of our own indulgent look into the lives of others.

Part of the reason for Verene’s success — and somewhat against those who view his primary influences as photographers who have intimately pictured American family life in recent decades, such as Shelby Lee Adams, Larry Sultan, William Gedney, Andrea Modica, Emmet Gowin and Lee Friedlander — is the way he uses social class as a chassis for depictions of home.  To my eye, his oeuvre owes much to a visual rhetoric about class that extends as far back as Jacob Riis’ famous images of urban poverty in New York, published in 1890 as “How the Other Half Lives.”

As an heir to Riis, Verene delivers messages from across a social barrier, images that only a photographer with special access and with special effort could make. In his case, it’s derived from the privilege of his membership in a particular family. Following Riis’ example, the pictures do not just inform us but address us.  They seem almost to speak what they show, expecting us to understand, or at least not to deny that we share a language — a social world — in common with his subjects.  In Verene’s case, his own voice hovers around the pictures through plainspoken, handwritten captions — one of the work’s most distinctive features. Also in the spirit of Riis (not to mention Galesburg’s most famous native son, Carl Sandburg), Verene’s images play on a theme of civilizational struggle, in which everyday life is situated in the foil of an American dream — not of consumerist transcendence, but of an unafflicted dignity to accompany pain when it comes, or at least a right to one’s own grief.  All of these structuring elements lend Verene’s work the aura of classicism, and quietly endow him with a measure of heroism.

The “family” to which Verene introduces us consists of a loose aggregate of close and distant relatives, plus friends and neighbors, and their relatives and friends, all seeming to travel in one another’s orbits and directly crossing paths from time to time. The effect is something like the narrative technique in John Dos Passos’ trilogy “U.S.A.” or E.L. Doctorow’s novel “Ragtime.” Some of Verene’s characters become protagonists, appearing in several photographs: his cousin Candi; two family friends from the local mental hospital where Verene’s parents once worked, Dorothy and Rozie; a boy named Travis and his extended family, particularly Travis’ cousins and Aunt Pam; Verene’s friends Amber and Crystal, and Crystal’s goddaughter Barchetta.

On one hand, we move through Galesburg peripatetically, as if wandering from house to house in a spirit of accidental encounter. On the other (this is particularly true for the sequence of images in the book, less so for the exhibition), he draws a clear arc from stable middle-class living to endemic poverty.

The book’s opening image shows Verene’s own family at a well-appointed Christmas breakfast table, and its closing images show Amber living with her young children in her car and then an abandoned restaurant. In between, Verene moves along a downward path from attractive single-family homes to overcrowded trailer parks, closely traced by a similar trajectory of downward generational mobility, with the younger people at the book’s end seemingly more at risk than their elders.

It is possible to read Verene’s pictures as sober revelations and even indictment of the circumstances afflicting the people and the worlds we encounter. However, he is not an activist or even really a reporter. He is concerned more with effects than with causes, and more with individuals whose idiosyncrasies interest him than with an encompassing appraisal of his town-cum-sprawling family.

For some viewers, precisely this selectivity will appear wanton, leaving him vulnerable to an ethical critique: that he is more interested in a carnival of idiosyncrasies than in forthright storytelling, that he parlays real life into a kitschy spectacle that he suspects his subjects won’t recognize as such, and that his irony and humor — from his liberal and at times freewheeling use of flash to his deadpan captions — shades into tender mockery.

I understand this critique, but I don’t share it, most importantly because it paints Verene’s subjects as dupes rather than collaborators. If nothing else, he makes clear that his subjects deserve more in the way of basic generosity than that, and anyway nobody can fool all the people all the time — for 26 years and running. Beyond this, the critique fails to register the artistic challenge Verene sets for himself. In his approach, truth cannot be peeled away from idiosyncrasy, or from the façade of appearances or the contingencies of events, as if these sheltered a more real reality underneath. On the contrary, for Verene the deeper reality is the dialectic of appearances itself, which can be steered at certain well-chosen moments into an analogous play of objects and figures in pictures. 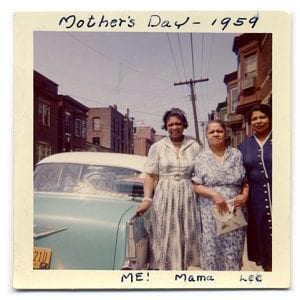 Or, to put it differently, it isn’t that Verene is making an artsy posture of the classic family snapshot — as for example the picture at left, which I found on one of many Internet sites devoted to recovered family photographs — but that he understands the semi-posed family snapshot as a tool of insight precisely because of the ways its loose formality supports distinctly reticent confessions.

We see Amber, for example, persevering through hard luck, and we empathize with her. But we can’t say we really understand much about her character, the good and bad choices she makes, the patterns that make up her life, the way she changes or doesn’t change in response to her challenges. Verene’s uncaptioned photograph (above) of her reading tarot cards at a table in her squalid restaurant home poignantly distills this ambiguity. A photograph of one of Amber’s daughters sits on the table, not quite one of the cards but much like them, so that the girl serves both as the only revealed aspect of fortune and the stakes of the game.  At the same time, a child’s forearm is draped across Amber’s shoulder from behind, more an act of clinging (or just barely hanging on) than a hug. It’s not clear whether Amber is pervious or impervious to her challenges at this very moment

Something similar is going on with many of Verene’s subjects. We meet his cousin Steve (top photo) at a table in McDonald’s with his daughter, just after his wife has left him. No one is eating, and the girl stares with numb pain into Verene’s camera as Steve averts his glance and does not embrace her. We learn that he never again sees his children, who are represented by a pair of empty rocking chairs in an unspecified room, but moves in with his mother, Doris, and seems to revert to childlike dependence.

In an uncanny replay of the McDonald’s picture, we later see him sitting beside his mother in a restaurant on Christmas, at a table with no food. Doris stares impassively at the camera, while Steve averts his eyes, this time in the other direction.

Years later, other Christmases come and go and we see Steve taking a more active role, wrapping gifts for other people’s children while his mother looks on. Eventually she dies, and Steve stays on in her house alone, repurposing his childhood swing set into an armature for drying laundry, with her cat as his companion. Ultimately it’s hard to say whether Steve is a weak and immature man, incapable of independence, or someone whose particular contribution to creating a more loving world simply proceeds through the love he and his mother share.

Verene has not made fictions of his family, but constructs their true stories more through elusive than immobile facts, building a relay of implications more than disclosures. Tacking back and forth between tawdriness and cheer, he is a tragedian without an underlying faith in tragedy. He defines his subjects in terms of loss and lucklessness, but resists making them denizens of a lost and luckless world. He shows us their foibles but not their faults. Their worlds contain many flaws but are not presented as fundamentally flawed. The result is a life’s work of cunning understatement: there is no promise that everything works out in the end, but there is still reason to hope that sorrow will eventually become disillusioned with Galesburg, and pull up stakes for some other town.